NOW THIS WAS knock-out rugby. After last weekend’s desperately one-sided quarter-final between Leinster and Glasgow at the RDS, tonight the Dublin 4 venue was host to a thrilling semi-final which provided high-octane entertainment for the full 80 minutes as a brilliant Bulls side stunned Leinster to book their place in next weekend’s United Rugby Championship final.

The fear heading into this game was that the Bulls would struggle to rise to the occasion given the huge ask placed on them – the Pretoria-based team tasked with managing a six-day turnaround which included the difficulty of managing the long trip from South Africa.

It was horrible preparation for a semi-final but as Leinster boss Leo Cullen highlighted yesterday, sometimes that adversity can bring a group closer together. That certainly looked the case here as the Bulls delivered one of the most memorable performances by a visiting team at this stadium in recent memory, the result meaning Leinster end the season trophyless for the first time since 2017.

The game started as so many do at the RDS – Leinster applying the early pressure, the visiting team scrambling to keep them out.

With less than two minutes on the clock Leinster were camped on the Bulls line, but the longer the series of close range carries went on, the less likely it looked that Leinster would find a way through. In the end Robbie Henshaw eventually lost the ball among a sea of Bulls defenders and Jake White’s team cleared the danger, booting the ball downfield and taking a big physiological boost from the first meaningful exchange of the evening.

It was an intriguing start, but Leinster soon struck from nowhere. After some tasty battles and heavy hits around the middle of the park, Ross Byrne was afforded just a second too much time on the ball and slotted a neat grubber in behind the Bulls’ defence.

In trying to readjust his feet, Bulls winger Madosh Tambwe slipped, allowing his opposite number Rory O’Loughlin close him down and get a foot to the ball, which David Kriel then tried to gobble up – only for Dan Sheehan to pounce on the loose ball and slide over the line, an opportunistic finish built on an impressive desire to provide support for O’Loughlin. 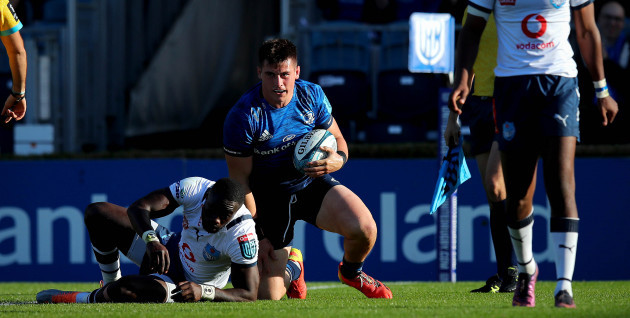 Yet Leinster’s early score only seemed to rally a spirited Bulls side.

Chris Smith – the drop goal hero in the Bulls’ quarter-final win over the Sharks – put the visitors on the board with a well-struck penalty as White’s side began to grow into the contest, Leinster making uncharestic mistakes in the face of the Bulls’ aggressive linespeed.

Suddenly it was the hosts under pressure, camped on their own line as the Bulls hammered away in search of a gap. They eventually changed tactic and spun the ball out wide where fullback Canan Moodie appeared to be in for an easy finish, but in diving forward he somehow spilled the ball and failed to ground it.

It was the type of moment that can kill a team’s momentum. Luckily for the Bulls, they were playing with penalty advantage so were offered a second shot. This time they went route one, Marcel Coetzee tapping the ball and feeding Johan Grobbelaar, who barrelled straight through for the Bulls first try. Smith converted and with 20 minutes played, the Bulls led 10-7.

This wasn’t in the script, and the Bulls clearly sensed opportunity against a startled looking home side.

Minutes after taking the lead the Bulls were on the hunt again.

Elrigh Louw peeled off the back of a lineout and brought the Bulls infield, the ball eventually finding its way to Coetzee, the former Ulster man doing well to collect it around his knees and burst through under the posts. It was a score that perfectly summed up the Bulls way – power with a purpose. This is a team that travelled to Dublin as the competition’s second-highest try-scorers – no prizes for guessing who holds top spot – and the team that has thrown the most offloads.

Smith added his second conversion and the Bulls led by 10.

Leinster needed a response and found one in style, hitting back with a fine team move started and finished by the returning Henshaw.

The Ireland centre’s superb offload initially set Jordan Larmour dancing through a blur of white jerseys, before a strong carry from Joe McCarthy brought Leinster deeper into the Bulls half, the ball eventually working it’s way back to Henshaw who produced an acrobatic finish under pressure. Byrne converted the score and Leinster were back within three points of the Bulls.

The two teams were now serving up a cracker as the early evening sunshine made way for a torrential downpour, the wet conditions adding an extra touch of chaos to the closing stages of a breathless opening period, the Bulls carrying that three-point lead into the break. 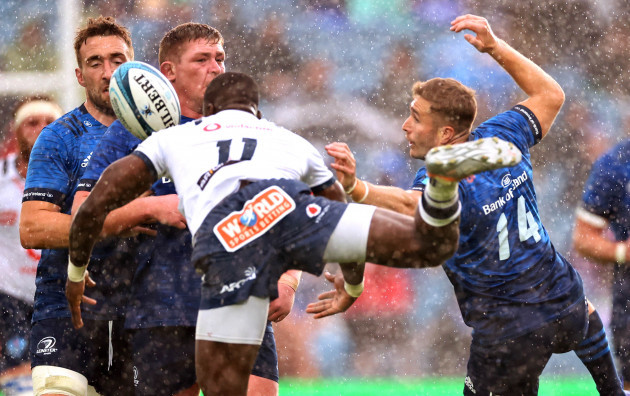 Those opening 40 minutes left Leinster with plenty to consider. Jimmy O’Brien was under real pressure at fullback, Andrew Porter was towing a fine line at the scrum and Caelan Doris wasn’t gaining his usual momentum in the carry.

Much of Leinster’s best play had Henshaw involved and 21-year-old Joe McCarthy – the only uncapped player in the Leinster pack – was bringing plenty of fight.

With calm heads needed, Leinster continued to look a little rattled after the half-time break, Henshaw dropping the restart to allow the Bulls set up another series of hard close-range carries. A draining defensive effort ensued, Porter eventually winning a huge turnover as the Bulls left empty-handed.

The momentum swung again, but while Leinster clocked up plenty of territory they were struggling to find that clinical edge. A five-metre scrum offered a prime opportunity, but the Bulls won possession and cleared the danger. Leinster then looked to get their passing game going but McCarthy failed to anticipate Tadhg Furlong’s quick hands and the move broke down.

At the resulting scrum the Bulls took another big win, with the two front rows then exchanging words; Furlong a notable absentee as he took his time picking himself up off the ground. It was to be his last action of the game, the tighthead making way for Michael Ala’alatoa with 30 minutes to play.

Furlong had barely found his seat as the Bulls struck for a third try. Again it was Grobbelaar driving forward at the back of a strong Bulls maul which crashed just short of the line. Referee Andrea Piardi pointed to the posts, awarded the penalty try and sent Leinster captain James Ryan to the bin.

The Bulls were now up by 10 with 25 minutes to play. Cullen had to take action, and sent Johnny Sexton in for Ross Byrne, Leinster’s season now very much on the line.

Their nerves were telling. O’Brien sent a clearance kick into the body of the Harold Voster but scrambled well to deny the Bulls centre.

Leinster got back into the Bulls 22, and Sexton pulled himself away from another heated confrontation to rally the home support. 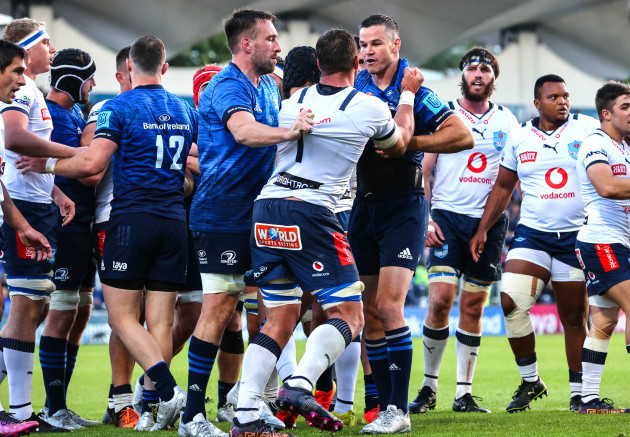 Yet it was his team who needed to do more as another trip to the 22 came to nothing, Sheehan seeing a five-metre lineout collected and cleared by the Bulls, before another Leinster lineout saw Ruan Nortje rise highest, Leinster’s setpiece now really struggling.

Then it came. Sexton, Henshaw and Larmour linked well to open some space, a free-flowing move then sending the ball between the hands of Ringrose and O’Brien before O’Loughlin darted over in the corner.

Yet crucially, Sexton’s conversion was off target, leaving Leinster trailing by five with eight minutes to play.

Then another killer, Ross Molony dropping a pass to offer replacement Bulls outhalf Morne Steyn a very kickable shot at the posts. Another three points for the Bulls, with Leinster left chasing two scores into the final five minutes.

They can now look forward to a URC final meeting with either the Stormers or Ulster next weekend. For Leinster, a long, hard summer awaits.

Get instant updates on your province on The42 app. With Laya Healthcare, official health and wellbeing partner to Leinster, Munster and Connacht Rugby.