The tweet, which claims to be sent from Ryan’s Twitter account in June 2018, reads: “Excited to meet Green legend and tireless LBGT* campaigner Peter Tatchell this weekend at Dublin Pride.

“Peter was in Dublin to speak on a panel yesterday and I have invited him to join us at the Parade tomorrow.”

The false tweet alleging to be from Green Party leader Eamon Ryan.

Tatchell, who has been a human rights and LGBT rights campaigner since the 1970s, has been criticised for a 1997 letter to the Guardian newspaper about sex between adults and children.

There is no evidence of the tweet’s existence when either searching Ryan’s account using Twitter’s own search function, or putting the key words into Google.

To ensure it has not simply been deleted, a version of Ryan’s Twitter from 2018 was examined through Wayback Machine, a tool used to archive web pages.

This also showed the tweet did not exist at the time it was alleged to have been sent on 29 June 2018.

A tweet from the exact same time on the same date, with roughly the same number of likes and retweets, however does exist. 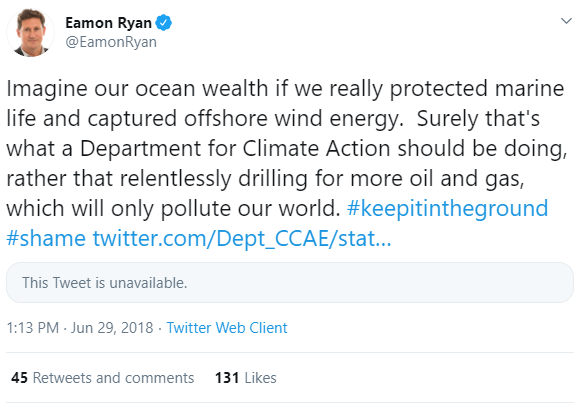 This tweet was sent at 1.13pm on 29 June 2018, using Twitter Web Client. The fake tweet has 42 retweet and 130 likes, and this real tweet has 45 and 131, with engagement from the past couple of weeks accounting for the difference.

This suggests that this tweet was used to mock-up the fake one.

If the alleged tweet had received that level of engagement, you would also expect to find replies to @EamonRyan from around that time that now lead to a deleted tweet. There is no evidence of this.

Minister Ryan said he did not want to comment on the issue, but a spokesperson confirmed the tweet about Tatchell did not appear on his account.

One Facebook post featuring this image has been shared nearly 100 times and liked by over 260 people as of publication.

The image has also been shared by several people on Twitter.

The Minister for Children and Green Party TD, Roderic O’Gorman, spoke out earlier this month against ”homophobic” attempts online linking him to the views of Tatchell.

They accused O’Gorman of having aligning views with Tatchell, with whom he was photographed at Dublin’s Pride festival in 2018.

Numerous social media posts online made claims about O’Gorman and a protest was held outside the Dáil calling for his resignation from the ministerial position.

The image of a tweet claiming to be from Eamon Ryan’s account about Tatchell appears to have been altered and there is no evidence to support its existence on his account either now or in 2018.

There is a lot of false news and scaremongering being spread in Ireland at the moment. Here are some practical ways for you to assess whether the messages that you’re seeing – especially on WhatsApp – are true or not.

Look at where it’s coming from. Is it someone you know? Do they have a source for the information (e.g. the HSE website) or are they just saying that the information comes from someone they know? A lot of the false news being spread right now is from people claiming that messages from ‘a friend’ of theirs. Have a look yourself – do a quick Google search and see if the information is being reported elsewhere.

Secondly, get the whole story, not just a headline. A lot of these messages have got vague information (“all the doctors at this hospital are panicking”) and don’t mention specific details. This is often – but not always a sign – that it may not be accurate.

Finally, see how you feel after reading it. A lot of these false messages are designed to make people feel panicked. They’re deliberately manipulating your feelings to make you more likely to share it. If you feel panicked after reading something, check it out and see if it really is true.

TheJournal.ie’s FactCheck is a signatory to the International Fact-Checking Network’s Code of Principles. You can read it here. For information on how FactCheck works, what the verdicts mean, and how you can take part, check out our Reader’s Guide here. You can read about the team of editors and reporters who work on the factchecks here

Have you gotten a message on WhatsApp or Facebook or Twitter about coronavirus that you’re not sure about and want us to check it out? Message or mail us and we’ll look into debunking it. WhatsApp: 085 221 4696 or Email: answers@thejournal.ie.

Barcelona's Interest in Isak Increased after Koeman's appointment. Larsson has a high opinion of the player (Mundo Seportivo)
Manuel Pellegrini: When you play against Real Madrid and var, it's too much
PSV and Porto are Interested in Barcelona midfielder PUC. He doesn't want to leave the club
Puyol about Barcelona: If we want to win the championship, we need to perform very well
Schalke sacked Wagner. The team has not won the Bundesliga since January
Iacini on 3:4 with Inter: Even a draw would be an unfair result, given how many chances Fiorentina created
Ramos Pro 3:2 with Betis: the Referee tried his best and didn't do anything intentionally
Source https://www.thejournal.ie/eamon-ryan-peter-tatchell-fake-tweet-5159269-Aug2020/