Demand for older peoples’ charity services triples due to Covid-19

Alone has received 37,000 calls from older people to support line since pandemic hit 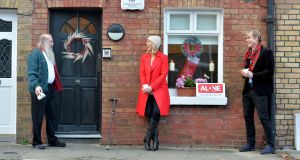 Older peoples’ charity Alone has received 37,000 calls to its national support line since the Covid-19 pandemic reached the State.

The organisation supports around 5,000 people in a normal year but has seen that figure grow to 15,000 over the last 12 months, which its chief executive Seán Moynihan said was due to the impact of the virus on older people.

In the first 12 weeks of the pandemic, people over the age of 70 were asked to cocoon and many found the social isolation difficult. Some are still cocooning as a result of Level 5 restrictions.

Alone has launched its Christmas campaign which encourages members of the public to give a helping hand to older friends, neighbours and relatives, which it says is of great need due to Covid-19.

TV presenter Kathryn Thomas is the face of this year’s launch, alongside an older person who uses Alone’s services, Don Johnson.

Ms Thomas said: “I admire the work that they do with older people and I’m so happy to be a part of such a positive message. Alone needs public support to continue providing its valuable services to older people in need all over the country.”

Alone has reached fundraising targets set for 2020, (based on figures in 2019 and estimated growth for 2020), but the demand for its services means that it needs more funding.

Mr Moynihan added: “Many older people are often embarrassed to reach out, and think that by asking for help and support they are bothering people.

“Alone want them to know that they deserve the support they require and should not be afraid to ask for help if needed.”

Earlier this month Alone began its Gratitude Campaign thanking older people, volunteers, supporters and staff for their assistance and support since the arrival of the Covid-19 pandemic in Ireland.

The Gratitude Campaign features images of older people who have all been supported through an array of different services from the charity alongside images of volunteers, staff and donors.

Pioli on Zlatan's red: He apologized. This is what great champions do, which is what Ibrahimovic is
Pep Guardiola: Football is complicated. The only way I know how to be a coach is just to think about Sheffield
Conte said that Eriksen will not leave Inter: He is part of our project. Christian is a very smart guy
Tuchel wants to see Holand at Chelsea. The club will not buy Rice from West Ham after the change of coach
Eriksen pro goal for Milan: It was the perfect free kick for me. I am very happy
Conte on 2-1 with Milan: Before the winning goal, the result was unfair. Their goalkeeper is the best player of the match
Mikel Arteta: Arsenal did everything right, but they lost. Wins give confidence
Source https://www.irishtimes.com/news/ireland/irish-news/demand-for-older-peoples-charity-services-triples-due-to-covid-19-1.4421737

No promises for more recycling options in Donegal

Boy awarded €7,500 after fall from ‘monkey bars’ in playground

'Post-Covid we'll go back to where we were': More than 60% of properties still cost more than HAP limits

‘Horrendously out of proportion’: Residents set against 19-storey apartments

Tributes to Dublin doctor who died with Covid-19

Ministers optimistic Leaving Cert exams will go ahead this year

Man (61) charged with murder of woman in Belfast

Getting gardaí to enforce quarantine in homes ‘problematic’

Mother and baby homes: ‘End of the first chapter but not the end of the story’

Q&A: What are the new Covid travel rules and how will they work?

Aggravated burglary rate in Dublin rises by over 25%

Q&A: How many people are travelling into and out of Ireland?

Taoiseach: 'Zero-Covid strategy is not possible or sustainable'

Concern over delays in vaccinating over-65s in mental health centres

Shortlist revealed for RTÉ Sport Awards Team of the Year - who would you pick?

BREAKING: Increase in Covid cases in Limerick as 90 more deaths are reported nationwide

Coronavirus: 90 deaths and 928 new cases confirmed, bringing the death toll in Ireland to over 3,000

Man pleads guilty to assaulting another man in Ballybofey bar

€1,500 fine was too lenient for driver whose careless driving caused death of toddler, court rules

Travellers into Ireland to be subject to mandatory quarantine at home or in a hotel, government says

Independent inquiry to examine mother and baby homes in North