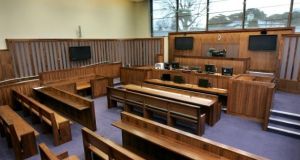 The report also recommends that suspects charged with sex crimes should not be named when their cases are before the courts unless and until they are convicted. File photograph: Matt Kavanagh/The Irish Times

The chief executive officer of the Dublin Rape Crisis Centre, Noeline Blackwell, has welcomed the recommendation of pretrial hearings in sex crime cases at which “side issues” could be addressed.

An expert group appointed by the government after the 2018 Belfast rape trial will publish its report on Thursday. Chaired by barrister and NUI Galway law lecturer Tom O’Malley, the group decided against recommending that sex crime victims be allocated their own legal representation during trials, saying such a move would destabilise how court cases were run.

Ms Blackwell told RTÉ radio’s Morning Ireland that pre-trial applications discussing the complainants’ sexual history were important to ensure that a complainant was not hit by an application that is “disconcerting at the very least, and horrifying to say the most” at the last minute.

Information and support were key areas identified in the report that need to be implemented quickly, she said.

Very often “the loneliest person” on the journey to prosecution for a sexual offence was the victim, who was often left lacking in support, information and basic legal advice, said Ms Blackwell.

Proposals to establish a clear pathway before a case is set down for hearing, were very welcome, she added, “so that when it comes to hearing, somebody will get heard on the day” and that anonymity would be granted in respect of all sexual assault cases. The victim was entitled to a hearing that allowed them to tell their story clearly without being “retraumatised”.

It was important that there be recognition of how different sexual offences were from other crimes, she said.

Minister for Justice Helen McEntee told the same programme that her plan was that within 10 weeks she would put in place measures to implement the recommendations of the report with input from NGOs involved and the authorities.

Some of the recommendations she hoped to move on “very quickly”. Ms McEntee said it was important that victims know that they would be supported and that they would know the supports available to them.

The report also recommends that suspects charged with sex crimes should not be named when their cases are before the courts unless and until they are convicted.

The report recommends that if suspects were convicted they could be named, as long as naming them did not identify their victims. At the same time, victims would retain anonymity unless they wanted to waive it so the person who attacked them could be named in the media.

Barcelona's Interest in Isak Increased after Koeman's appointment. Larsson has a high opinion of the player (Mundo Seportivo)
Manuel Pellegrini: When you play against Real Madrid and var, it's too much
PSV and Porto are Interested in Barcelona midfielder PUC. He doesn't want to leave the club
Puyol about Barcelona: If we want to win the championship, we need to perform very well
Schalke sacked Wagner. The team has not won the Bundesliga since January
Iacini on 3:4 with Inter: Even a draw would be an unfair result, given how many chances Fiorentina created
Ramos Pro 3:2 with Betis: the Referee tried his best and didn't do anything intentionally
Source https://www.irishtimes.com/news/crime-and-law/drcc-welcomes-recommendation-for-pretrial-hearings-in-sex-crime-cases-1.4323617

'It's going to be difficult': Biden ready to face Trump's 'lies' in debate

Where is the troublesome Internal Market Bill at?