Government may ring-fence proceeds of crime for youth programmes 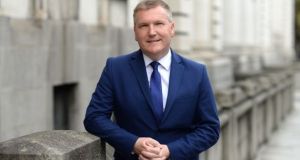 Minister for Public Expenditure Michael McGrath acknowledged that ‘it has always been the case that the Departments of Finance and Public Expenditure and Reform resist any efforts to ring-fence proceeds for any particular purpose’. Photograph: Dara Mac Dónaill

The Government may ring-fence the proceeds of crime for youth diversion programmes in a departure from established financial practice after a “bonanza” year of €16 million in cash seized by gardaí.

Minister for Public Expenditure Michael McGrath acknowledged that “it has always been the case that the Departments of Finance and Public Expenditure and Reform resist any efforts to ring-fence proceeds for any particular purpose”.

But “that doesn’t mean it necessarily has to apply indefinitely into the future”, he said.

Fine Gael TD Neale Richmond appealed for the confiscated funds to be designated for youth diversion and other related programmes in a bid to cut crime rates after bumper Garda cash seizures in 2020.

Mr Richmond said the €16 million confiscated was more than the previous two years put together with just over €7 million in each of 2018 and 2019. It was he said, “an additional €9 million in cash”.

He pointed to work by Cllr and Olympic boxing medallist Kenneth Egan, coach at Neilstown Boxing Club in Dublin and an addiction counsellor, who works with youngsters in a socially deprived community.

“Every year he’s losing a percentage of those kids to crime and he has parents coming to him worried about their kids leaving school early and getting in with the wrong crowd.”

Rather than just ploughing the seized cash back into the Exchequer “to have it scattered around departments” he said the could be effectively used to “tackle the sources of crime” and introduce youth diversion programmes, new education and work experience projects, and pay for addiction counsellors and social workers.

Mr Richmond pointed to France which he said had followed Ireland’s model and established its own form of Criminal Assets Bureau (Cab) with seized funds and goods going to crime prevention and New Zealand has been doing the same.

He said on the Garda Twitter account nearly every day there are stories of “€10,000 being seized here and €1 million seized there” or 10 motorbikes or 17 Rolex watches. “Let’s invest in the communities that are absolutely devastated by the criminals and gangsters.”

The Minister acknowledged that Cab investigations had resulted in more than €194 million being returned to the exchequer between 1996 and 2019, an average of just over €8 million a year. Last year €4 million went back to the exchequer and €5.6 million in 2018.

Mr McGrath said the re-allocation of such funds for a specific purpose was contrary to normal practice on the basis that it would “tend to constrain the Government in the implementation of its overall expenditure policy”.

But he said the idea “is a good one in principle” and the question was “how it can be made to work in practice”. He gave a commitment to examine the issue and said he would contact the Minister for Justice about the matter.

Mr Richmond, who raised the issue in the Dáil, said on Friday said a meeting was being arranged with the two Ministers to progress the matter, which he hopes will take place within the next fortnight with Cllr Egan also present.

Lampard on 8th place Chelsea: I can handle the pressure
Wegorst-the first in the history of Wolfsburg to score 12 goals in the 1st round of the Bundesliga. He is in the top 3 of the goalscoring race
Bounou is the second goalkeeper of Sevilla after Palop, who blocked 2 + penalties in the La Liga season
Frank Lampard: Back in December, Chelsea were in great shape. I am concerned that we lost it so quickly
Rodgers on Leicester's fight for the championship: It's too early to say, but in the first half of the season we played consistently and at a high level
Only in one season in the Abramovich era did Chelsea score fewer points after 19 rounds than they do now. Then Mourinho was sacked after 16 games
Werner has not scored in 11 games in the Premier League. He has 1 goal in his last 15 games for Chelsea
Source https://www.irishtimes.com/news/ireland/irish-news/government-may-ring-fence-proceeds-of-crime-for-youth-programmes-1.4421641

Covid-19: AstraZeneca has told HSE vaccine deliveries can be expected by mid-February

BusConnects: Over €55m spent by NTA on bus scheme so far

Covid-19 vaccinations to be prioritised for paramedics and firefighters

When does it start? Is it on TV? Will there be music? Everything you need to know about the US inauguration

Paradise Square: The new musical about the Irish and Blacks in NYC's Five Points

Noah Donohoe may have been assaulted before his mysterious death, court hears

'It signalled the end of our relationship': Meghan Markle's privacy case over letter to her father begins

BREAKING: Phased return for Limerick children with special educational needs not to go ahead

Continuity IRA may have fired shots at civilian helicopter in Fermangh, PSNI says

Teachers and SNAs call for schools to stay closed

'We did what we came here to do': Trump signs off as US President with farewell address

Covid-19: Number of clusters rises by 73 in second week of year

Covid-19: Number of clusters rises by a third in second week of year

Your evening longread: I survived a Chinese 're-education' camp for Uighurs

TD calls for Limerick-Galway rail link to be extended

Cabinet signs off on plan for GPs and pharmacists to vaccinate 1.5 million people

Most firefighters still unvaccinated as vaccinators wait on more supply

The Remote: Biden's big day, Mitchell and Webb are Back and a 1980s AIDS drama

Man found with €12,000 of stolen North Face clothing in home is jailed

Cllr calls for busy roadside path to be extended

Covid restrictions to be extended past January 31st

Man to appear in court after entering grounds of Leinster House

'At least Leinster used some of our tactics in that game, so that's brilliant to see'

Nearly 500,000 people over 70 to receive Covid vaccine from their GP

Liam Campbell should not be extradited to Lithuania, court told

Taoiseach wants European languages to be taught across all primary schools

Man who sexually assaulted woman on Luas tram is jailed

'It's like buying from China or the US': Brexit causes issues for Irish ordering online from UK

'We're well in the surge now for critical care': 202 people with Covid-19 are in ICU

'Nowadays, footballers stop being normal people from the age of 11 or 12'

Covid-19: More than 154,000 vaccine doses administered in North to date

Woman abused Gardai after roaring at staff in charity shop

Gardai have little to go on following gnome attack

Covid-19: Growing doubts about reopening of special education this week