'I kept trucking away. I knew my time would come if I just kept at it'

IT WAS BACK in his school days at Clongowes when Will Connors started to build the habit of tackling low.

Noel McNamara, now the Ireland U20s head coach and Leinster academy manager, was in charge of rugby at the Kildare school back then and he had a novel way of working on his players’ tackling.

McNamara suspended a net at hip height on one of the back pitches, meaning Connors and his team-mates would have to dip and scurry underneath it before making a tackle on the other side. On countless freezing-cold and wet days, Connors was one of those who completed tackle after tackle in this manner and the long-term results are clear. 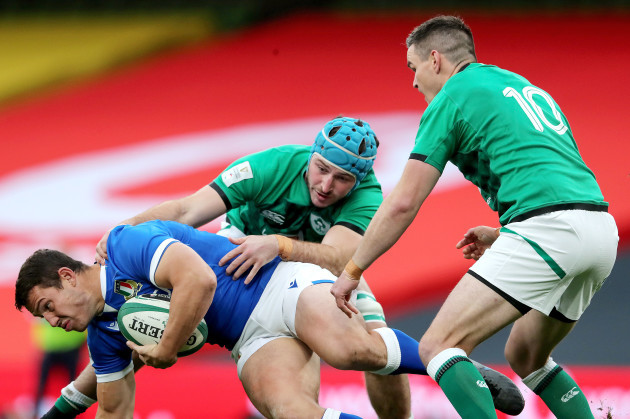 Connors was outstanding for Ireland on Saturday. Source: Bryan Keane/INPHO

There isn’t a chop tackler like Connors in Irish rugby, with the Leinster man having continued to work hard on his technique in recent years to ensure his brave defensive efforts aren’t putting his own head at risk.

There’s no doubt that a few Italian ball-carrier woke yesterday morning with sore legs on account of some of 24-year-old Connors’ impactful work as the Ireland openside completed 18 tackles in a man-of-the-match performance on his Ireland debut.

Connors made four passes for Ireland, including one lovely tip-on to fellow former Clongowes student Tadhg Beirne, while the flanker also carried the ball himself 10 times for 36 metres and scored a try at the back of an excellent maul.

It’s important to note that there is more to Connors’ game than just tackling but there is no harm in highlighting his consistently excellent defensive work either. Rugby heavily praises players of attacking brilliance but defence is half of the game.

Speaking on Saturday evening after his successful first Ireland cap, Connors did say he doesn’t want to be seen as only a tackling machine.

“I’m constantly trying to work on my game,” said Connors. “I suppose I did get knocked back a few times but I’ll look at that, see what happened.

“I don’t want to be a one-trick pony. I’m constantly trying to work on my weaknesses and I think that’s why the back row is so good – we’re all working together to try to get the best out of each other, picking each other’s brains to constantly improve.” 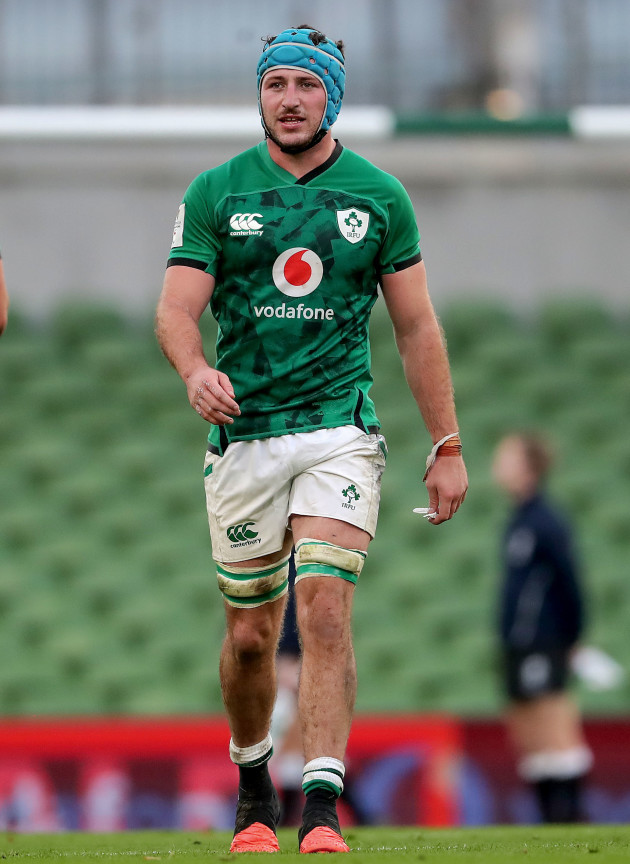 Connors scored a try on his first cap for Ireland. Source: Bryan Keane/INPHO

Connors worked very well in tandem with CJ Stander and Caelan Doris in the back row on Saturday and it will be fascinating to see if Farrell backs that trio again in Paris this weekend. The openside has done as much as he could have to retain his place.

Connors – whose nickname ‘Porridge’ dates from Clongowes, where he was apparently addicted to microwaveable oats – first worked with Farrell at an Ireland training camp last December, which he was “quite surprised” to be included in but thoroughly enjoyed as the Ireland boss told him to back himself.

“Faz said the same kind of stuff, he just wants everyone to go out there and enjoy it and express themselves and show why they’re there.”

Connors was outstanding for Leinster over the course of the 2019/20 season but had to wait until last month for his Champions Cup debut as he started in the quarter-final defeat to Saracens. He was initially a ‘development player’ with Ireland earlier this year but earned a full call-up just before the championship was put on hold due to Covid-19.

The flanker had actually been expected to play against Italy earlier this year so it was fitting that he got his debut in the rescheduled game on Saturday.

“Every boy’s dream is to play for Ireland,” said Connors.  “I’ve had a few injury setbacks over the last while but constantly this was the goal, where I wanted to go. 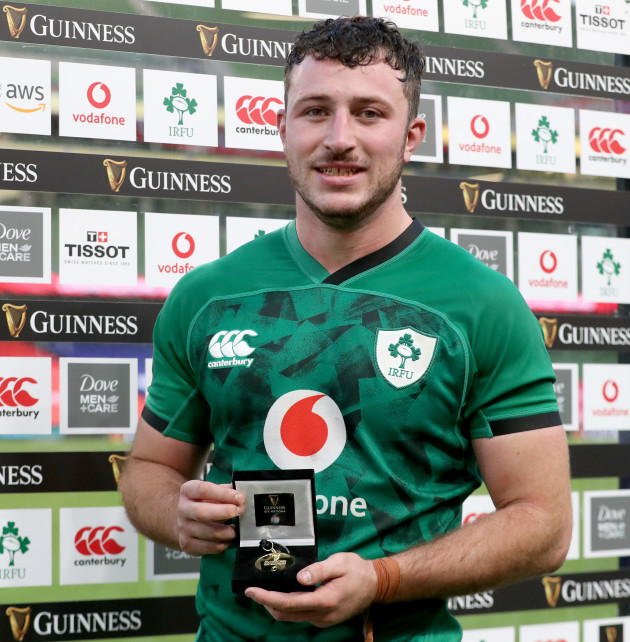 The Kildare native was man of the match against Italy. Source: Dan Sheridan/INPHO

“I kept trucking away. I knew my time would come if I just kept at it. It’s an unbelievably competitive position but that’s just the beauty of it – we are all pushing each other incredibly hard.”

Indeed, Farrell could consider Josh van der Flier or Peter O’Mahony’s skillsets as more suited to starting against France this weekend but Connors certainly left the Ireland boss with plenty of food for thought in suggesting he’s ready for Paris.

“We’ll see how the team unfolds but if I get the honour to be selected, it’s something I would be unbelievably excited for,” said Connors.

“There’s a lot of passion in this group and we know what we’re representing. We know we have the country behind us and that will just drive us forward, we will do the best we can.”

Laporta on Messi's future: This is Barca's priority. I don't think Leo only cares about money. All the clubs in the world want to get it
The first conference League final will be held in Tirana on 25 may 2022
Spain will play Italy and France will play Belgium in the Nations League play-offs. The final tournament will be held in Milan and Turin
Solskjaer about Fred: He was lucky to stay on the field in the 1st half. His second yellow is not a foul
Real can fire Zidane if the club loses to Gladbach in the Champions League (COPE)
Barcelona will not pay players' salaries for January
Ramos is leaning towards leaving Real Madrid (Onda Cero)
Source https://www.the42.ie/will-connors-ireland-italy-france-5244746-Oct2020/

Autumn was one of warmest in recent years, Met Éireann reports

Galway 2020 gets European funding for a two-day youth event

'Nothing can be as bad as not having her remains': Family renews appeal on 20th anniversary of Sandra Collins' disappearance

Time to trust Defence Forces to command itself, suggests study

Boots to roll out COVID-19 testing service at Knocknacarra store

Fear and anxiety about Covid-19 is ‘overwhelming’ among the public

Gardaí should have power to request passcodes for phones and laptops, report says

Public will not be refunded if concerts in 2021 are rescheduled, Varadkar warns

Sexton returns from injury as O'Sullivan is lined up for debut

Bank of Ireland warns customers not to fall for investment scams

New 24-hour bus service to launch in Dublin next weekend

BREAKING: Covid outbreak in Limerick hospital for the elderly

Case dismissed as lack of caution leaves a ‘fatal flaw’

Top US cleric, who slammed Irish leader Varadkar for being gay, arrested

Drop in number of Covid-19 patients at Letterkenny hospital

Poll: Do you enjoy working remotely?

Woman rushed to hospital after being stabbed in Dublin

Covid-19 vaccines ‘not rushed’ as science to develop them already existed, says WHO

Major concerts and matches may not go ahead in summer, Varadkar warns

Cold, frost and icy stretches forecast for rest of week

Cherish every moment; hug and kiss your loved ones every night

Baby born in a hurry outside Ford garage – and he’s called Henry!

Slow but steady return to business as Lockdown eases at last

Opinion: Remote working is here to stay, so let's approach it properly and get the balance right

Putting our frontline workers up in lights for Christmas

Cafe culture: Tank and Skinny’s are ready after missing ‘buzz’

Only one respite bed for 46 service users in Inishowen

The largest cohort on the PUP right now? Workers in accommodation and food services

Selfies mean autographs are now just a relic of the past

Evolved to run – but not to exercise