Ireland in precarious position as third wave of Covid-19 could be more deadly, Nphet warns 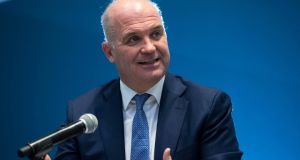 Chief medical officer Dr Tony Holohan warned that even in optimistic scenarios, the probable level of the virus in January 2021 will ‘present a real and substantial threat to the ongoing protection of public health and of the most vulnerable’. Photograph: Colin Keegan/Collins

The State’s public health team has warned the Government that Ireland is in a “precarious position” and a looming third wave of Covid-19 could be more deadly than the last one.

The chief medical officer Dr Tony Holohan has written to Government warning that even in optimistic scenarios, the probable level of the virus in January 2021 will “present a real and substantial threat to the ongoing protection of public health and of the most vulnerable, the protection of health and social scare services and the protection of our schools and education system.”

The National Public Health Emergency Team (Nphet) modelled a number of scenarios that would see at least 400 cases a day in January and possibly sooner.

“If we start with higher case numbers in early December, this threshold will be breached sooner.”

The letter was sent on Thursday following a meeting this week of Nphet and ahead of a decision by the Government on Friday evening to move the country from Level 5 coronavirus restrictions next week to Level 3 restrictions with some modifications.

The team warned Government that “if restrictions are eased now to a similar extent but more rapidly than in the summer, from a higher baseline force of infection, in winter and over the Christmas period a third wave of disease will ensue much more quickly and with greater mortality than the second.”

They said the situation remained “fragile”.

“The Nphet is concerned that the disease trajectory could once again turn quite quickly.”

The Government was also told there is “persistent and delayed incidence in healthcare workers and notifications of healthcare setting outbreaks and the number of confirmed cases in hospital, critical care, and Covid-19 deaths are not decreasing which gives rise to significant concern.”

They also said the incidence in older people remains high.

The team also expressed “considerable concern that international travel over the coming period will undermine the progress achieved by the country in recent weeks.”

As previously reported, the Nphet also recommended against the hospitality sector reopening in December citing the higher risk of such indoor settings.

If cases rise again, the team said that “it will be important to intervene early to bring transmission back under control.”

Setien is demanding 4 million euros in compensation from Barca. Valverde's resignation cost the club 11 million
Two Cornell players tested positive for coronavirus after the match with Barca
Mbappe finished 1st on the Ligue 1 goalscoring list, scoring 13 goals in 17 appearances. He broke the streak of 4 games without goals
Holland has scored 27 goals in his first 28 Bundesliga appearances. He's the second person to do this
Sevilla are trying to sign Papa Gomez, Monchi is in talks. Atalanta wants to sell him to a club not from Italy
Holand has scored 14 goals in 13 Bundesliga games this season
Neymar is playing his 100th game for PSG. He has been at the club since 2017
Source https://www.irishtimes.com/news/health/ireland-in-precarious-position-as-third-covid-19-wave-could-be-more-deadly-nphet-warns-1.4421759

Holocaust Memorial Day: ‘We have a duty not to forget’

Covid-19: We've made substantial progress but are a long way from where we need to be

Remote-working ‘revolution’ bringing people back to towns and villages

FactCheck: No, the lack of hospitalisations from flu is not because cases are mistakenly being diagnosed as Covid-19

Thinking Anew – ‘That they may be one’

‘Try and keep me out’: Biden officially invited to visit Ireland

Ireland's Ambassador on why Biden's inauguration is important to the Irish

Quiz: Can you finish these lines from US President inauguration speeches?

Eclectic selection of movies on TV during another Lockdown week

How did a remote Mayo town become Ireland’s most Covid-infected place?

Gang of teen hoodlums ‘spiralling out of control’ in Limerick town

Your evening longread: Why Halima Aden quit being a supermodel

Limerick family is a class above at teaching children

Efforts intensify to save Curlew from extinction in Ireland

Chair of national children’s hospital development board to step down

BREAKING: Latest number of Covid cases in Limerick revealed 'as we are starting to see first signs of a lower prevalence of the disease in population'

Level 5 restrictions to continue for a number of weeks, says Taoiseach

Almost 1,000 people fined in Ireland for traveling more than 5km

‘It really is a monumental day’: Vaccine arrives at Covid-free care facility in Limerick village

Woman who said she had death threats due to sexuality, loses refugee status appeal

Senator Lynn Boylan: No family should have to choose between putting food on the table and staying warm

PAC to question Horse Racing Ireland over 'unusual circumstances' behind the loss of €389,000

Men remain in jail for contempt over Strokestown eviction

Your story: Have you ever played matchmaker? We want to hear from you!

Man (23) given suspended sentence for knife attack on escort

Close to 1,000 fines issued by gardai for non-essential travel

Student settles case over slip in Dublin Lidl store for €20,000