Collision occurred on the N80 at Ravenswood, Bunclody on Saturday afternoon 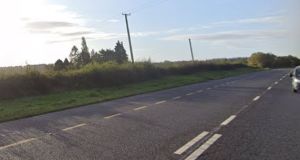 The collision occurred on the N80 at Ravenswood, Bunclody at approximately 3.10pm on Saturday. File image: Google Maps

A motorcyclist has died following a crash in Bunclody, Co Carlow.

Gardaí said they were investigating the collision involving a jeep and a motorcycle on the N80 at Ravenswood, Bunclody at approximately 3.10pm on Saturday.

The road was closed temporarily for Garda Forensic Collision Investigators to conduct an examination and is now reopen.

Gardaí­ are appealing for anyone with information, particularly any road users who may have witnessed the collision or have dash-cam footage, to contact them at Carlow Garda Station on 059 913 6620, the Garda Confidential Line on 1800 666 111 or any Garda station.

Ozil posted a GIF of himself at work in the office: Forward, Arsenal
The Slovenian youth team wants to expel the tyrant coach: he is Against warm-UPS, forbids sleeping on planes and celebrating goals
Ozil on the rapid match: I'll support Arsenal at the TV. I bet on a 4-1 win
Alexey Miranchuk: It's nice to be Back in the game. We continue to work 🤙 🏻
Liverpool will deliver food packages to families in need during the school holidays
UEFA reprimanded Karabakh in a military salute on a match of League of Europe
The Messi Foundation won a lawsuit against the ABC newspaper. They wrote about the organization's tax fraud
Source https://www.irishtimes.com/news/ireland/irish-news/motorcyclist-50s-dies-in-crash-with-vehicle-in-co-carlow-1.4359662

Residents take court action over development of ‘The O’Rahilly’ site

What is your potential? - Find out at a FREE introductory talk

Under 35s should be excluded from next lockdown – Dr McDaid

Coronavirus: HSE apologises to thousands asked to do their own contact tracing

ANSWERED: What essential shops and services are permitted to open under Level 5?

John Gilligan arrested along with two others in southern Spain

When 265 Irish service members defected from the US to Mexico

'Like a slap in the face': Vicky Phelan says women's concerns over CervicalCheck Tribunal have been ignored

Opinion: The gym is great, but please don't insult us by suggesting it's the answer to mental illness

'When your mother cried during labour, she was paying for her sins': Stories of mother and baby home survivors read into Dáil record

Young mother killed when “high-powered” car went out of control

Poll: Do you plan to exercise more over the next six weeks?

'Filippo who?' - Profiling the unheralded academy coach taking Dundalk into the Europa League

Looking for love in lockdown? Facebook Dating has launched in Ireland