Number claiming job related benefits rose to 56,200, up 89 per cent over previous month

6 minutes ago Updated: about a minute ago 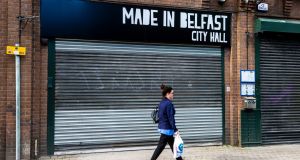 Unemployment in Northern Ireland rose by almost 90 per cent in April, according to official figures.

Data released on Tuesday by the Northern Ireland Statistics and Research Agency (NISRA) showed that the number of people claiming job related benefits rose to 56,200, an increase of 89 per cent compared to the previous month and the highest monthly increase on record.

The figures give the first official indication of the impact of coronavirus on employment in Northern Ireland.

The highest claimant count rates were in Derry and Strabane and Belfast, while the lowest were in Lisburn and Castlereagh and Mid Ulster.

In the UK as a whole, the number of job-related benefit claimants increased by 69 per cent in April.

A total of 117 redundancies took place in April, with a further 783 proposed in the same month. This was 40 per cent higher than the number proposed the previous month and was the fifth largest figure in the last five years.

A further 124 redundancies were proposed in the current month to May 18th.

The Northern Ireland unemployment rate for the period January to March 2020 was unchanged over the quarter at an estimated 2.4 per cent, and down 0.5 per cent over the year.

However, NISRA noted that because these figures only covered the period up until the end of March, they did not fully reflect the impact of coronavirus on the labour market.

Ole Gunnar Solskjaer: I Think it was a penalty against Aston Villa
Philadelphia played in t-shirts with the names of black people who died at the hands of the police
Kompany tries everything at Anderlecht: he coached without a license (terrible), played 15 matches and invested 3 million euros in the club
Aston Villa coach on Manchester United penalty: A shameful decision
Paul Pogba: Winning the Europa League and the FA Cup are two of Manchester United's goals for this season
Manchester United's first ever Premier League win 4 consecutive games with a difference at least 3 goals
Brunu has scored 7 (4+3) points in his last 3 games for Manchester United
Source https://www.irishtimes.com/news/ireland/irish-news/northern-ireland-unemployment-almost-doubled-last-month-figures-show-1.4257212

'It's like Jesus, they're back': Alan Kelly on FF's return, Coveney's garda car 'shame', and advice for the Greens

Officer from outside North to lead inquiry into Bobby Storey funeral

Quiz: How well do you know The Truman Show?

Impressive wins for Harley and Orr

TUNE IN: Shilelagh Law performs live this Friday in support of Hope for the Warriors!

Your evening longread: Uncovering the unsolved mysteries of Mount Everest

Ireland must be cautious as COVID crisis continues

Warning of big rise in use of crack cocaine in Limerick

House in Australia left in 'state of complete carnage' after being trashed by Johnny Depp, court hears

'We're seeing an increase of cases among young people': 77% of today's Covid-19 cases under age of 25

Dundrum to bring in one-way system to allow greater distancing

Covid-19: Six more deaths as caution urged with R-number ‘at or above 1’

MacGill Summer School to be held online due to Covid-19

Another day with no coronavirus deaths in Northern Ireland

It's on: Taylor and Persoon confirmed for rematch of controversial 2019 classic

Former seminarian gets apology and damages over Irish Sun article

Dispute over two uninsured horses worth up to €4.5 million comes before High Court

Melbourne lockdown: ‘It’s dawning how serious the outbreak is again’

Brothers who drowned in quarry were ‘dive masters’, funeral told

Cranberries announce date to release reissue of No Need to Argue

Cranberries announce release date for reissue of No Need to Argue

19 people in the West hospitalised from stabbings last year

Johnny Depp described himself as a monster to ‘placate’ Amber Heard, court hears

Explainer: Why Irish banks are being accused of 'profiteering from the pandemic'

WHO's David Nabarro: 'I am very worried about the next six months'

Pubs may face prosecution for breaches of Covid regulations

RSA chair: 'I think everybody in public life should obey the law'

New sewerage scheme in the pipeline for Ramelton, Milford and Rathmullan