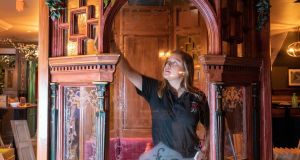 A publican in Cork has said he is not re-opening under Covid-19 restrictions because they would turn his bar “into a crime scene” and believes he would alienate customers.

Con Dennehy, who owns the Venue in Ballintemple, is one of the 60 per cent of Cork publicans who opted not to re-open until July 20th, saying that he didn’t believe the current regulations where customers must book a slot and have a meal were particularly practical.

“No, I haven’t reopened -I didn’t want to turn the bar into a crime scene with tape and screens everywhere and I didn’t want to alienate people I know and respect by telling them that they have to leave after 90 minutes or 105 minutes,” he told The Irish Times.

“To my mind, it’s only civil servants who could have made up these regulations because they are totally impractical and totally unenforceable - I’d rather stay closed until September if needs be to open properly for my locals and not end up alienating them with these regulations.”

Mr Dennehy said that he expects to open on July 20th and when he does, he trusts his customers to be responsible regarding social distance and keeping one metre apart of their own volition, rather than he or his staff having to go around and asking people to keep apart.

“Who is going to police social distancing? The gardaí hardly want to get involved in it, that’s a HSE job and do they have the personnel to police it? I think people should look after their own interest and do the sensible thing and keep their distance without having to be told.

“If any fellow is iffy about going into a pub, he shouldn’t go in - I saw fellows coming in March before we closed down and they were taking their pint off the counter and stepping back and they were keeping their own social distance, they didn’t have to be asked so it was working back then.”

The majority of pubs in Cork have opted not to re-open until July 20th but those that have re-opened and are serving food in line with Government guidelines are generally expressing satisfaction with business, according to the Chair of the Cork Vintners Federation of Ireland, Michael O’Donovan.

Mr O’Donovan said that approximately 40 per cent of the 208 pubs in the city and suburbs re-opened last Monday, serving substantial meals to customers who have to make a booking at the pub and generally it seemed to be working out reasonably well.

“A few bars had some teething problems with people coming in and asking for a drink and the bar staff or management having to explain to them that they are really operating as a restaurant and they have to have food and they then can have a drink to accompany it.”

Mr O’Donovan said the majority of customers have been very co-operative even though some of the bars are finding the 105-minute limit too restrictive, particularly when they are serving customers a three course meal which is being made to order in the pub.

He said there did not appear to be any major problem with people turning up without bookings even though individual pubs operated different systems with some pubs having set times that people can book while others are allowing the customers to choose a time and then booking a slot at that time.

“All the bars have people at the door particularly in the evening so when people come to the door if they have capacity, they take them but if they are full they are moving on - what is noticeable that people are having multiple bookings, some in the same venue or some in other venues.”

He said that all bars are operating social distancing and most people are being very co-operative even though he has heard of one or two cases where people have tried to pull tables together but once management explained that this wasn’t allowed, they accepted it.

Mr O’Donovan, who runs the Castle Inn on South Main Street in the heart of Cork city, said that he would be waiting until July 20th as he does not serve food in the bar and like many of the 60pc of bars who have opted to wait until July 20th, he does not have a booking service.

“We will have capacity for 28 people with one metre social distancing when we re-open on July 20th but if the Government introduce a booking system on July 20th, a lot of bars will remain close because they don’t have a booking engine.”

Spartak is going to withdraw from the RPL because of the refereeing – your reaction?
There are 2 cases of coronavirus in Atletico. The match with Leipzig – August 13
Renzo Ulivieri: Pirlo is one of the most profound thinkers of world football. He knows more than most coaches
Pirlo wants to sign Tonali at Juve. Alternative – Locatelli
Before the match with Real Madrid, sterling watched a video of the defeat by Tottenham in the 2018/19 Champions League
Andrea Pirlo: I am Flattered to have received such respect and trust from Juventus
Former Manchester United midfielder angel Gomez has moved to Lille. He will spend the season on loan in Boavista
Source https://www.irishtimes.com/news/ireland/irish-news/only-a-civil-servant-could-have-come-up-with-unenforceable-pub-regulations-1.4296524

Portlaoise locked down: ‘Our older clientele haven’t been back’

Coronavirus: Non-essential travel from US set to be banned within days

Money Diaries: A construction contracts manager on €67K with a young family in Galway

New to the market: Limerick farm that is ‘the real deal’ is guided at €650k

Glenswilly do just enough for win over Four Masters

Face coverings will be mandatory in shops from tomorrow

‘Our hearts are broken’ – implications of fresh lockdown sink in

Google liaising with HSE to remedy issue with Covid app

MacCumhaill’s come though fighting to see of Dungloe

'He convinced others that peace could be a reality': The week in quotes

Mulroy Academy suspend all club activities as a Covid precaution

BREAKING: One additional confirmed case of Covid-19 in Limerick as 68 new cases are reported

Coronavirus: No new deaths and 68 new cases confirmed in Ireland

Gaeil Fhánada win well away in Burt in IFC

McGettigan stars as Naomh Conaill cruise to victory against Ardara

Coronavirus: No additional deaths in State but 68 new cases

Where three counties meet: How the gap between Limerick, Kerry and Cork was finally bridged

Financial support for Kildare, Laois and Offaly should be considered, says Minister

The MacCarthy family: Their father survived Dunkirk, Nagasaki and a torpedoed ship. Will their pub survive Covid-19?

Woman airlifted to hospital from Errigal

Poll: Are you still using the Covid-19 tracker app?

The many faces of Michael Collins

Vinny Byrne, the most feared assassin sent by Michael Collins

Larry Donnelly: American politics is in a bad state and the TV networks aren't helping

Making Cents: Buying a house with no savings - Liam Croke

Limerick weather: Warm and mainly dry with an odd shower

Ranking the 8 remaining teams in the Champions League

Listen: Delight for Mark McGinty as Glenfin make it two from two