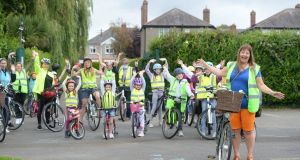 An initiative to get Dublin children out of cars and on to bicycles for the return to school next month is being trialled in Clontarf.

The Clontarf “cycle bus” will see up to 260 primary school children cycling to Greenlanes National School on Seafield Avenue in September. The initiative follows advice from the Department of Education that children should cycle or walk to school if possible to minimise coronavirus risks.

The cycle bus works on a bus stop system, with parents given maps of locations where their children can join in, Green Party councillor and co-ordinator of the scheme Donna Cooney explains.

“We have looked at the post codes of the people who have signed up and put together three or four routes that children can join. Some people will be at the start of each route and then there will be ‘bus stops’ along the way where children can join in.”

So far 70 per cent of parents in the school have decided their children will participate with another 13 per cent considering the scheme, she said. “If that 13 per cent came on board that would be 260 children cycling to the school.”

A similar scheme was set up in Galway two years ago, having borrowed the idea from the Netherlands, and the reduced traffic volume on the roads due to the current crisis is being seen as an opportunity to give it further promotion.

Children of any age can participate in the Clontarf scheme but up to second class they must be accompanied by a parent or minder. The youngest children will cycle at the front with a “leader parent”, Ms Cooney said, with other parents cycling at the traffic side of the children. All the parents involved so far have been Garda vetted and a number have undergone specialist cycling training, she said.

Ms Cooney said she hoped there would be a city-wide take-up of similar schemes.

“This has already worked in rural areas, but we are the pilot in the city. Dublin City Council will be publicising this initiative, so we hope it will become widespread. The Department of Education’s road map for school reopening encourages children to walk to cycle to school.”

The cycle bus will run every school day, “hail rain or shine”, she said. “Obviously if there’s an orange rain warning we might walk, but as long as everyone dresses appropriately there is no problem cycling in the rain.”

“This tool can be used to inform back-to-school travel plans and help inform local choices, in walking and cycling to school,” the council said.

Local schools are being asked to identify local travel and transport issues, which the council can provide assistance and support in overcoming. “These issues and hazards include the need for cycle parking, deteriorated footpaths, traffic pinch points, pedestrian crossing etc.”

Barcelona's Interest in Isak Increased after Koeman's appointment. Larsson has a high opinion of the player (Mundo Seportivo)
Manuel Pellegrini: When you play against Real Madrid and var, it's too much
PSV and Porto are Interested in Barcelona midfielder PUC. He doesn't want to leave the club
Puyol about Barcelona: If we want to win the championship, we need to perform very well
Schalke sacked Wagner. The team has not won the Bundesliga since January
Iacini on 3:4 with Inter: Even a draw would be an unfair result, given how many chances Fiorentina created
Ramos Pro 3:2 with Betis: the Referee tried his best and didn't do anything intentionally
Source https://www.irishtimes.com/news/environment/parents-encouraged-to-ditch-the-car-for-cycle-bus-1.4323083

'It's going to be difficult': Biden ready to face Trump's 'lies' in debate

Where is the troublesome Internal Market Bill at?

Woman arrested on suspicion of driving under influence, causing traffic delays on motorway

Man (75) dies after being hit by van in Co Cork

Pedestrian (70s) killed after being struck by van in Cork

‘No magic bullet’ to fight Covid-19 in next six months, says NPHET chairman

‘No magic bullet’ to fight Covid-19 in next six months, says head of expert advisory group

More than one hundred people attend “peaceful assembly” in Letterkenny

American threatened with jail in Thailand over negative Tripadvisor review

'We will win': Thousands gather in central London for anti-lockdown protest