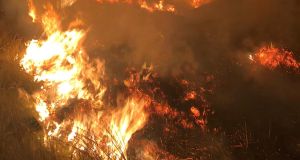 Any potential links between a devastating grass fire on Dublin’s Bull Island and the return of traffic to the nature reserve need to be investigated, the Green Party has said.

Dublin Fire Brigade was called on Monday night to an extensive fire at the north Dublin nature reserve, with two fire engines attending and crews using gorse beaters to tackle the blaze.

The cause of the fire has not been formally established.

On Monday morning, cars were allowed to return to the Causeway Road which runs through the nature reserve, and is used to access Dollymount Strand and St Anne’s Golf Club.

Dublin City Council had closed the road to traffic at the beginning of April following Garda concerns over the public’s observance of the Covid-19 restrictions.

The island is a wildlife reserve and a key part of the Dublin Bay Biosphere which is a Unesco site protected by National, EU and International legislation. The fire was a “potential ecological disaster” the Green Party said, as ground nesting birds have returned to the Island after any years, including the skylark and the ringed plover.

“I’m so upset this morning to think of the destruction of the beautiful habitat. A world Unesco site, Bull island has the most designations of any site in the country, as a bird sanctuary since 1930’s, a biosphere reserve, and a nature reserve,” Green Party Councillor for Clontarf, Donna Cooney, said.

“We don’t know what caused it yet, but I want to find out if there is a connection to the fact that they opened up the island to cars yesterday,” she said.

Cllr Cooney called on the council to do everything in its power to protect the island.

“Nature had recovered in the last few weeks when human activities had been restricted, the public had been enjoying nature in its all its wonder by threading gently, listening to the beautiful song of the skylark.

Cllr Cooney had earlier called for cars not to be allowed return to the causeway on Monday because inadequate facilities had been installed for cyclists and walkers, she said.

The council this week published an action plan for the nature reserve which would limit public access to parts of the island.

This is the best Milan in years: superkambekom with Juve (3 goals in 5 minutes!) saved the intrigue in Serie A
Zlatan Ibrahimovic: I am the President, player and coach! If I had been in Milan since the start of the season, we would have taken the scudetto
Sarri on the defeat by Milan: we played first-class football for 60 minutes. Then-turbidity
Pioli on the victory over Juve: Milan became a team. We can play even better
Pioli beat Juventus for the first time as a coach
Vardy has scored 10 goals for Arsenal in Premier League matches. Only Rooney has more
Ronaldo scores or gives an assist in 17 consecutive Serie A matches, where he scored 25 (21+4) points
Source https://www.irishtimes.com/news/environment/potential-links-between-bull-island-fire-and-traffic-must-be-examined-greens-1.4257230

Disadvantaged students much more likely to have disengaged from school work

Man who accosted stranger on Dublin street jailed for a year

Quiz: How well do you know your European cities?

Passenger who promised driver a ‘few quid’ after crash awarded €10,000

Your evening longread: Inside the lives of internet middlemen

McElhinneys Summer Sale – A sale like never seen before

POLL: Who do you think Joe Biden should select as his running mate?

Probation act applied for man who spat on Garda after arrest

Explainer: Traveling between the US and Ireland during coronavirus

BREAKING: No new confirmed Covid-19 cases in Limerick as one person dies from disease nationally

A thrilling spy series, a Disney favourite, and a laugh-out-loud comedy - it's your weekly TV guide

1 death due toCovid-19 and 24 new cases of virus identified.

Coronavirus: One further death and 24 new cases confirmed in Ireland

Coronavirus: One more death and 24 new cases reported in the Republic

New RNLI lifeboat based at Clifden will carry the names of 10,000 people in fundraising effort

Coronavirus has caused decline in people with dementia, carers say

€1 million in funding announced for six historic towns around Ireland

This is the Labour Party's new front bench

'We have no other alternative': Mater Private Hospital defends charging €275 for Covid tests

Yes, there is a case of bubonic plague in China. No, it's not something to worry about.

The European Commission has slashed Irish and eurozone growth forecasts

Limerick council to waive fees for street furniture outside businesses

City traffic up to 70 percent of normal levels

Johnny Depp's lawyers tell UK court that his libel case against The Sun is about 'vindication, not money'

Donald Trump hits out at "far-left fascism" and "angry mobs"

Tens of thousands of immigration renewals can now be done online