HEAVY RAIN IN southern Japan has triggered flooding and landslides, leaving at least two dead, more than a dozen missing and others stranded on rooftops waiting to be rescued.

More than 75,000 residents in the southern prefectures of Kumamoto and Kagoshima were asked to evacuate following torrential rain overnight.

The evacuation is not mandatory and it is not known how many actually fled.

NHK television footage showed large areas of Hitoyoshi town in Kumamoto inundated in muddy water that gushed out from the Kuma River. Many cars were submerged up to their windows.

Mudslides smashed into houses and floodwaters carried trunks from uprooted trees. Several people were seen standing on a convenience store roof as they waited for rescuers. 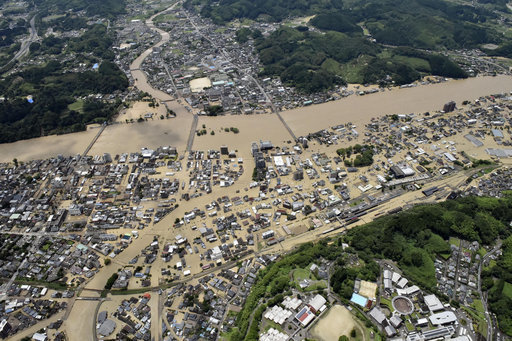 Areas are covered in muddy waters that gushed out from the Kuma River. Source: AP/PA Images

NHK said about 13 people were reported missing. Kumamoto officials said they were still assessing the extent of the damage.

Flooding also cut off power and communication lines. About 8,000 homes in Kumamoto and neighbouring Kagoshima were without electricity, according to the Kyushu Electric Power Company.

Prime Minister Shinzo Abe set up a task force, vowing to do his utmost to rescue the missing. He said up to 10,000 defence troops were being mobilised for rescue operations.

The Japan Meteorological Agency earlier issued warnings of extraordinary rain in parts of Kumamoto, about 600 miles south west of Tokyo, but later downgraded them as the rainfall — estimated at four inches per hour — subsided.

Latvian Stepanov is Wenger's worst transfer. Arsene did not understand that Bergkamp admired him for a joke – and signed
Berbatov – Bale: Gareth, I want to see you play football!
Arturo Vidal: Bayern are always the favourites, but Barcelona is the best team in the world
Kike Setien: Lewandowski is a great player, but he is not on the level of Messi
The great Milan of the noughties are already coaches: Gattuso is rebuilding Napoli, Shevchenko is going to the Euro, some are still at the club
The Premier League will not have a winter break in the 2020/21 season. Start-September 12, end-may 23
Liverpool have entered talks with Bayern over Tiago
Source https://www.thejournal.ie/flooding-japan-south-evacuated-5141322-Jul2020/

'Anything that could fly or float was out there last night': The story behind the rescue of Galway paddle boarders

Coronavirus: Another new case in Donegal

Coronavirus: No new deaths and 92 more cases confirmed in Ireland

EXPLAINER: How would a lockdown of Limerick be called?

Around 20% of meat plant workers are covered by sick pay, according to an industry spokesperson

Rescued women ‘weak and tired’ but ‘thankful’, says fisherman who found them

Brendan Halligan’s funeral recalls a ‘true Dub’, an Irishman and a European

Woodie’s Click & Collect is the 'best way' to DIY

St Johnston and Letterkenny lose out in T10 semi-finals

'All sorts of a mess': Dáil Covid committee hears from trade unions about meat plant workers' 'tale of woe'

Warning from gardaí after Dublin business conned out of €1.2m in invoice redirect fraud

The 2010s were Earth's hottest decade on record

Missing dog in Letterkenny – have you seen Misty?

Investigation after body of man (30s) discovered in Cork City

Top chef finds the best ingredients for a staycation in Donegal

Fancy a free stay on a farm in Ireland? We have the solution

Love, art and revolution in Ireland, through Helen Hooker and Ernie O'Malley's journey

Search under way for two women missing in Galway bay

Motorcyclist airlifted to hospital in critical condition after collision in Kerry

People urged not to visit Knock on busiest day

Poll: Are you concerned about using public transport?