WHEN RUSSIA LAUNCHED their invasion earlier this year, Ukraine’s football manager Oleksandr Petrakov immediately volunteered to enlist in his country’s Territorial Defence Force, only to be told that, at 67, he is too old. He was given another task instead: lead Ukraine to the World Cup.

That ambition has not been fulfilled, as Ukraine were narrowly beaten 1-0 by Wales in their play-off final in Cardiff on Sunday. They were desperately unfortunate, losing to an Andriy Yarmolenko own-goal with a clear penalty ignored by both referee and VAR. 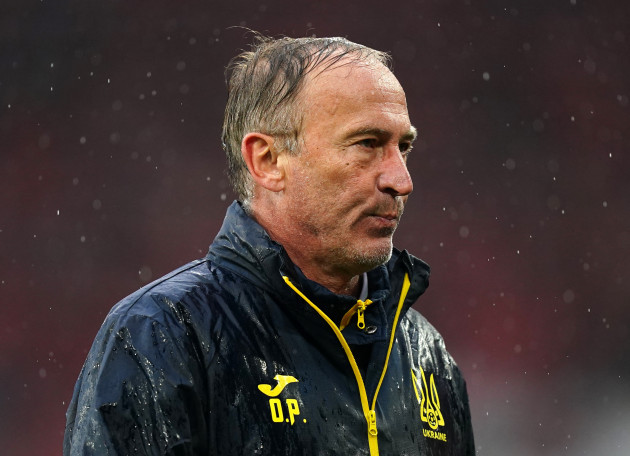 Petrakov after the defeat to Wales. Source: PA

Now they arrive in Dublin to begin their Nations League campaign, a competition doubted in peacetime and whose littleness could not be made more stark when compared to the horror at home.

But regardless of the format, football still manages to jut out its elbows and make its own importance.

“Our aim, our task now, is not only to go onto the pitch and play but to call for the whole world’s attention to highlight that we are Ukrainians, we are alive and we are fighting”, said midfielder Serhiy Sydorchuk at yesterday’s pre-game press conference in Dublin.

Ukraine’s footballers have been made exempt from the rule barring men of fighting age – deemed 18 to 60 – from leaving the country. “President Zelenskyy said when the war started that every Ukrainian should be in his or her place in order to be helpful in the best way possible to bring victory”, said Sydorchuk. “I think what I am doing on the football pitch is what president Zelenskyy said, in my best capacity to bring glory to Ukraine.”

“The Ukrainian players, the coaches, and all the staff, have been great ambassadors for their country amidst the chaos of their lives and their compatriots, and the thousands who have lost their lives”, added Stephen Kenny. “By continuing to play, they are keeping it at the forefront of whatever country they’re playing, within the media and within the European media.”

It is a horrific backdrop to the first-ever meeting of Ireland and Ukraine at senior level. Ukraine’s domestic-based players linked up together on 30 April, as they left their homeland for a training camp in Slovenia. The journey took 37 hours, as it wended its way around the safest route possible.

All of the players have been affected by the war. Sydorchuk gave a bracing account of fleeing Kyiv with his wife, who was eight months’ pregnant when the shelling began. Most of their family, including their parents, have stayed in Zaporizhzhia, a city the Russians are 50km from.

Striker Artem Dovbyk’s wife has stayed in Ukraine to care for their parents, midfielder Oleksandr Karavayev is a native of the seized city of Kherson to which he is not allowed to return and from which his sister-in-law – who recently had a baby girl – is not allowed to leave.

Midfielder Taras Stepanenko has spoken of spending three days in the basement of his home with his wife and three children as the bombs began raining down on Kyiv, before driving to to the city of Chernivtsi. A Russian rocket destroyed a building on their route just 20 minutes after they passed it.

“I just really want to go home and for the situation to normalise. That’s my major concern”, said Petrakov.

As the Ukraine players read of daily barbarities, the Irish players come into this game merely dogged by familiar banalities.

They remain without a win in the Uefa Nations League and are also without a competitive home win in over a thousand days: that was under Mick McCarthy and against Gibraltar. Ireland’s struggles in Armenia won’t mean “wholesale changes” according to Kenny, who gives the distinct impression that Plan B is to make Plan A better. 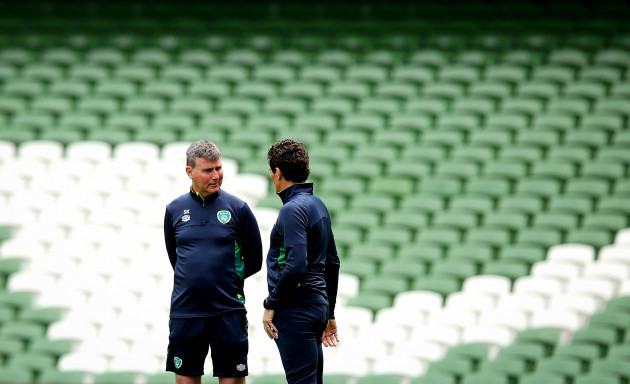 He referenced the goalless draw at home to Portugal as a template to follow in this game, and if so, he may swap a striker for a midfielder. Ireland usually change between 3-4-3 and 3-5-2, so Jason Knight or Alan Browne may be in the running to replace Troy Parrott. Seamus Coleman will be definitely be replaced as he has a groin problem. Cyrus Christie is the frontrunner to come into the team, though Kenny mentioned Browne, Chiedozie Ogbene and Festy Ebosele as alternate options. There may be a change at left wing-back too, given Enda Stevens’ relative travails in Yerevan and James McClean’s boundless energy. Gavin Bazunu is injured so Caoimhín Kelleher will remain in goal.

Ireland may not be facing Ukraine at full-strength tonight as the impression is that they may well rotate their entire team. It’s difficult to imagine many of their first-choice players being ready to play just four days after the World Cup play-off defeat, a game in which a “dead silence rained over the team”, according to Sydorchuk.

The FAI have distributed 2,00 free tickets to Ukrainian refugees for this game, though capacity will be some way short of capacity, with 38,000 tickets sold.

Perhaps that’s a reflection of lukewarm feelings towards the Nations League.

Kenny has said the fact the game is happening is a “miracle”, and that it will be remembered in Irish football lore in 50 years.

It is a deeply curious event: an end-of-season game in an unloved competition against a heavily-rotated side days after sporting heartbreak, competing amid an unimaginable emotional toll and against a barbarous backdrop.

Yes, football doesn’t really matter at all but it is the very awareness of that fact from which the sport derives its power.

If football can always draw attention to the event that is more important than itself, then a game is always worth playing.