Six people have been killed in traffic incidents across Israel and the West Bank on Wednesday and Thursday, marking a particularly deadly 24 hours on the country’s roads.

A 54-year-old woman and her 7-year-old niece from Qalansawe were killed and three others were injured when a car and a truck collided at the Be’erotayim Junction along Route 57 near Netanya in the center of the country on Thursday.

The Magen David Adom ambulance service described the crash as “very severe” and said they found the woman, named as Layla Mutab, lying on the road unconscious and without signs of life. Paramedics declared her dead at the scene.

The young girl was also found unconscious, and paramedics began CPR at the scene before taking her Laniado Hospital in Netanya, where she was also declared dead.

A 23-year-old man was brought by paramedics to Hillel Yaffe Medical Center near Hadera for stomach pains, while a 40-year-old woman and 10-year-old girl were taken to Meir Medical Center in Kfar Saba, according to MDA, likely as a precaution.

The 41-year-old driver of the truck, a resident of the northern Arab town of Arara, did not require medical attention, MDA said. 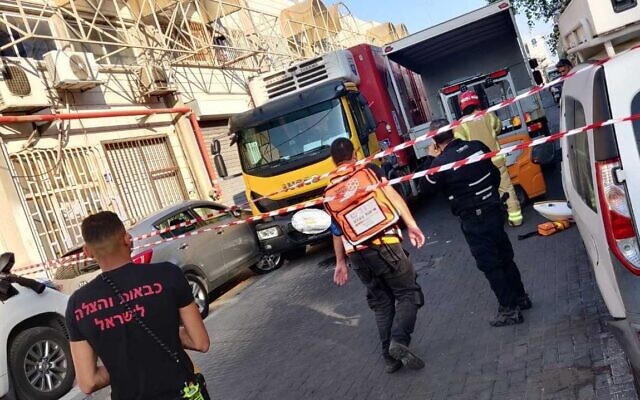 Rescue services at the scene of a truck collision in the Tel Aviv suburb of Holon, August 11, 2022. (Hatzolah)

Police have opened an investigation into the accident and the truck driver.

In another incident earlier Thursday morning, a 40-year-old man died after his truck was hit by another truck in the Tel Aviv suburb of Holon.

MDA said they found the victim unconscious and in a critical condition. He was transported to Wolfson Medical Center while paramedics attempted to revive him, but doctors declared his death shortly after arrival.

On Wednesday, Gabriel Barda, the father of Channel 12 journalist Nesli Barda, was killed when a Palestinian man driving a stolen car collided with him on Route 5 in the West Bank, near the central Israeli city of Rosh Ha’ayin.

Police revealed on Thursday that a Palestinian had stolen the car then turned and began driving against traffic, causing a head-on collision with Barda’s vehicle that killed both drivers. 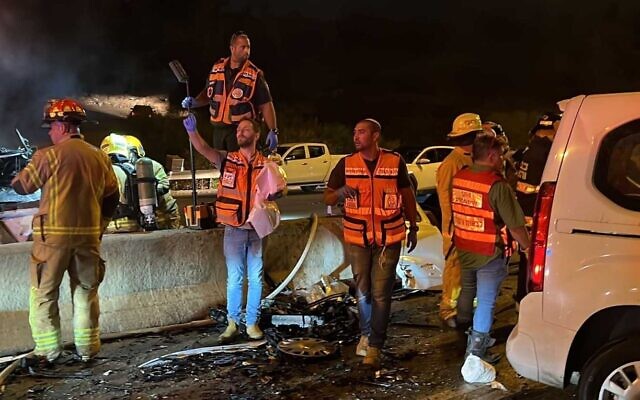 Rescue services at a car crash on Route 5 in the West Bank, near the central Israeli city of Rosh Ha’ayin, August 10, 2022. (Hatzolah)

One of the first responders, a firefighter, told Channel 12: “When we got to the scene we saw a vehicle that was flipped over and on fire, with someone trapped inside, and another vehicle also had a trapped person.”

Less than an hour after the deadly West Bank collision, a second accident involving two motorcycles and one car occurred on Route 65 near the northern Israeli town of Kafr Qara, southeast of Haifa.

A 25-year-old motorcyclist, Muhammad Khamarsha, was pronounced dead at the scene. Another three people suffered light to moderate injuries and were brought to the Hillel Yaffe Medical Center.

According to the Or Yarok nonprofit organization, which tracks traffic fatalities and road safety, 219 Israelis have died on the road so far this year, compared to 222 at the same time last year.