An Arab man from northern Israel was sentenced Thursday to 15 years in prison after being convicted for his role in riots last May that featured some of the worst inter-ethnic violence in the country’s history.

According to a statement from the State Attorney’s Office, Mohammed Mahdi Agbaria confessed to shooting a pistol at police during rioting near the city of Umm al-Fahm due to his belief that “Israeli security forces were harming the holiness of the Al-Aqsa Mosque” atop the Temple Mount in Jerusalem’s Old City.

He was also found guilty of hurling tiles from the roof of his home at the officers who later came to arrest him, striking one of them in the head.

Agbaria, a married 36-year-old father of two, was convicted by the Haifa District Court of attempted murder, illegal gun possession, assault and other offensives.

Along with the 15-year prison term, he received a suspended sentence of 51 months and was ordered to pay a fine of NIS 10,000.

In the ruling, the judges said that Agbaria acted out of “a nationalistic and ideological motive.” They added that “miraculously” no one was injured by his actions, which they termed “acts of defiance” against the government.

“[His actions] constitute an attempt to carry out a coup by armed force,” the judges wrote, explaining that they were therefore handing him a stiffer sentence. 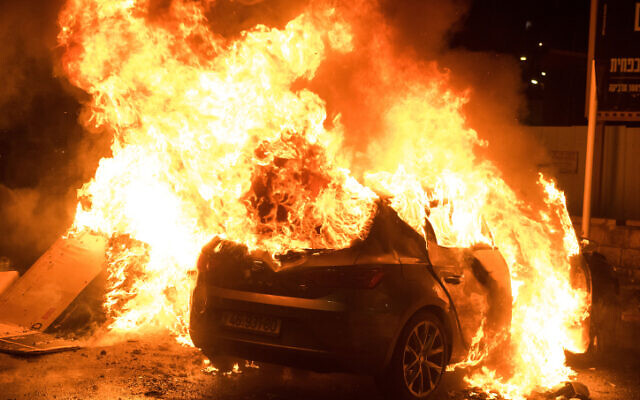 The ruling came weeks after another Arab Israeli man was sentenced to 10 years in prison for taking part in a mob assault on a Jewish resident of Acre during the May 2021 riots that left the victim with life-threatening and permanent injuries.

The riots in Acre and outside Umm al-Fahm were part of a series of violent inter-communal disturbances, particularly in Israel’s mixed Jewish-Arab cities, that took place in the days following the outbreak of conflict between Israel and Hamas in Gaza on May 10, 2021.