The Israeli Air Force’s fleet of armed and surveillance drones was an “integral” part of the recent round of fighting against the Palestinian Islamic Jihad terror group in the Gaza Strip, military officials said Wednesday.

According to the Israel Defense Forces, drones conducted more than 2,000 hours of flight time in some 100 sorties during the 66-hour battle, dubbed Operation Breaking Dawn, between August 5 and 8.

Dozens of targets were hit by the drones, mainly using the Elbit Hermes 450, which is operated by the Air Force’s 161st Squadron and the Artillery Corps unit 5252, from the Palmachim Airbase.

“The whole of Gaza is ‘covered’ with UAVs that collect intelligence 24 hours a day. From this intelligence, the Southern Command, the Gaza Division, the Air Force and other branches produce high-quality intelligence that turns into targets,” said Brig. Gen. Omri Dor, the commander of Palmachim.

“Some of these targets have been attacked by helicopters and fighter jets… and of course by our drones, which are also an integral part of the IDF’s offensive array,” he said.

Dor said the use of drones during the battle, and in general, was “diverse.”

“Starting with a very surgical event of finding a person or a single launcher and neutralizing it without causing collateral damage or harm to another person,” he said, to “excellent scanning abilities, which enables massive attacks [by fighter jets], as we have seen in recent times, and in recent years in general.”

Brig. Gen. Neri Horowitz, the commanding officer of the Artillery Corps, said the drones had been scanning the Gaza Strip in the days leading up to the battle, allowing them to have the intelligence to accurately target senior leaders, mortar and rocket launchers, including those which “were prepared for launch or those that had already fired.”

Dor said being able to conduct “aggressive attacks with a lot of explosives and minimal collateral damage” using fighter jets was thanks to the drones scanning the area.

During the recent battle against PIJ, the IDF said it delayed several strikes that would have been conducted, if not for drones identifying innocent people nearby who may have been hurt. 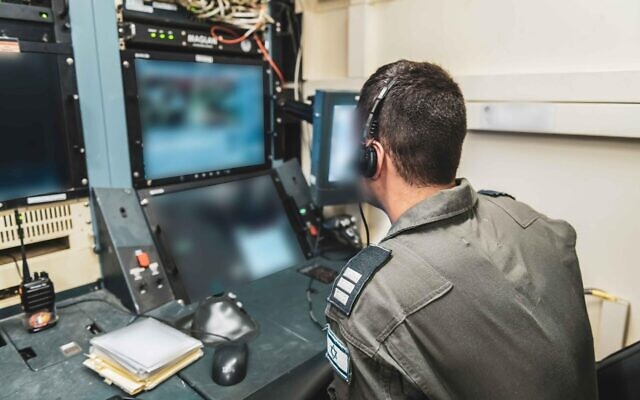 An IAF drone operator is seen during Operation Breaking Dawn, in an image published by the military on August 17, 2022. (Israel Defense Forces)

Still, Hamas authorities in the Gaza Strip said 49 people were killed amid the fighting, including 17 children. The IDF believes at least 12 people were killed by rockets misfired by Palestinian terrorists that landed short inside Gaza.

Hamas did not say how many of the total killed were affiliated with terror groups. At least 15 of those killed were claimed as members by the PIJ, Hamas and another smaller terror group.

Horowitz said the unit operating the drones has been a “significant force in many operations over the years and has an extensive combat heritage.” 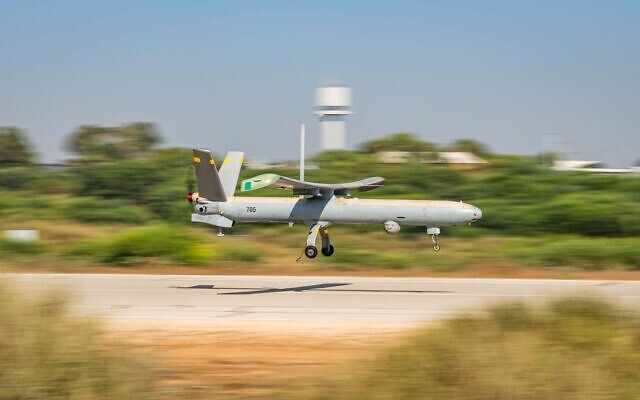 An Elbit Hermes 450 drone comes in for a landing at the Palmachim airbase, during Operation Breaking Dawn in early August 2022. (Israel Defense Forces)

Until recently, talk of Israel’s armed drones was barred from publication by the Military Censor. For years the IDF would not state it uses armed drones, and Israeli journalists who attempted to report on it came up against the IDF censor.

Horowitz confirmed that Unit 5252, the attack drone unit, has existed for more than two decades. “Since its inception, it has been a model for unique collaboration within the IDF,” he said.

Other drones used by the Israeli Air Force include the Hermes 900, also developed by Elbit, and the Israeli Aerospace Industries’ Eitan, also known as the Heron TP.

The IDF said that in general, drones consist of about 80% of the total operational flight hours in the Air Force. Israel has not disclosed how many attack drones it has.