Europe levels fresh sanctions on Iran over drones to Russia, crackdown on protests

The EU and Britain are set to impose more sanctions on Iran for drone supplies to Russia and a crackdown on protests over the death of Mahsa Amini, European diplomats said Friday.

The new measures will target around eight individuals and organizations involved in the manufacture and delivery of drones Moscow has used in the war on Ukraine, diplomats said.

Another 20 individuals and one organization will be added to the asset freeze and visa ban blacklist over the repression of demonstrations that have rocked the regime, officials said.

The sanctions are expected to be formally signed off by foreign ministers meeting in Brussels on Monday. The EU has already imposed sanctions on eight officials and organizations, including the head of Iran’s Revolutionary Guard Corps and two drone makers, over the arms supplies to Russia.

Tehran’s “morality” police, interior minister and state broadcaster Press TV are among more than 40 names already on a blacklist over the bloody crackdown on protesters.

The Kremlin’s forces have used Iranian drones as a key weapon to attack Ukraine’s energy infrastructure. The EU is looking under a separate sanctions package to stop the supply of drone engines from the bloc to Russia and Iran in a bid to curb Moscow’s war machine.

The fresh sanctions over Mahsa Amini demonstrations come after Tehran sparked international condemnation by carrying out its first known execution over the protests.

Mohsen Shekari, 23, was hanged Thursday after being convicted of blocking a Tehran street and wounding a paramilitary on September 25, early on in the protests.

Brussels has faced a tricky balancing act over its response to Tehran as the EU is mediating a push to revive the 2015 Iran nuclear deal. But those efforts to get Iran and the United States back onboard with the agreement have largely stalled. 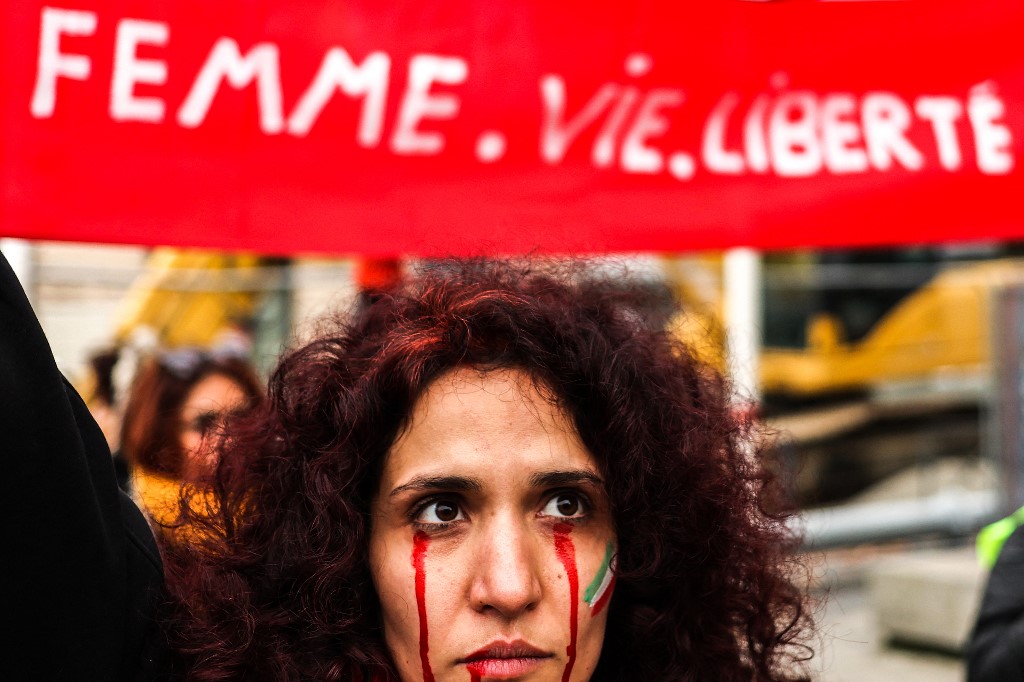 A protestor with red tears painted on her face during a rally in support of the demonstrations in Iran, in Toulouse, south-western France, on December 3, 2022. (Charly TRIBALLEAU / AFP)

“This includes six individuals linked to the Revolutionary Courts that have been responsible for prosecuting protestors with egregious sentences including the death penalty,” the government in London said.

Two of the Iranians now subject to a UK travel ban and assets freeze are former directors of the notorious Evin prison in Tehran: Ali Chaharmahali and Gholamreza Ziaei.

The sanctions, timed to mark world days for anti-corruption and human rights, hit individuals across 11 countries — “the most that the UK has ever brought together in one package,” the foreign ministry said.

Iran claims to show ‘restraint’ in face of protests

Meanwhile, Iran insisted that it was exercising “utmost restraint” in the face of protests, after drawing condemnation for executing a man involved in demonstrations sparked by the death of Mahsa Amini.

The Islamic republic has seen weeks of unrest — which authorities call “riots” — following the death in custody of Amini, a 22-year-old Iranian woman of Kurdish origin, after her arrest for an alleged breach of Iran’s strict dress code for women.

“In countering riots, Iran has shown utmost restraint and, unlike many Western regimes… Iran has employed proportionate and standard anti-riot methods,” the foreign ministry said in a statement.

“The same is true for the judicial process: restraint and proportionality,” it said on Twitter late Thursday.

Western governments have condemned the Iranian authorities’ protest crackdown, which rights groups based abroad say has killed more than 450 people. Iran says more than 200 people have died, including security personnel.

Ten other people now face the death penalty in the Islamic Republic over the protests. London-based rights group Amnesty International says at least 28 people are at risk of execution.

America’s democracy is ‘unbowed and unbroken,’ says Biden in State of Union address

Joe Rogan: ‘The idea that Jewish people are not into money is ridiculous’

Holocaust survivor, 92, to be Doug Emhoff’s guest at Biden State of the Union speech