BERLIN — German officials say they expect more people to be detained in connection with an alleged far-right plan to topple the government that saw 25 people rounded up Wednesday, including a self-styled prince, a retired paratrooper and a judge.

The plot was allegedly hatched by people linked to the so-called Reich Citizens movement, which rejects Germany’s postwar constitution and the legitimacy of the government. Prosecutors suspect those arrested of being either members or supporters of a terrorist organization.

Georg Meier, the top security official in Thuringia state, told public broadcaster Deutschlandfunk on Thursday that he expects a second wave of people being detained as authorities review evidence.

Meier accused the far-right Alternative for Germany party of fueling conspiracy theories like those that allegedly motivated the plotters detained across the country this week.

Those held include a former Alternative for Germany lawmaker, Birgit Malsack-Winkemann, who is also a Berlin judge. The party condemned the alleged coup plans.

Also detained was Heinrich XIII Prince Reuss, whom prosecutors consider one of the two ringleaders of the plot. The 71-year-old member of the House of Reuss continues to use the title of “prince” despite Germany abolishing any formal role for royalty more than a century ago. 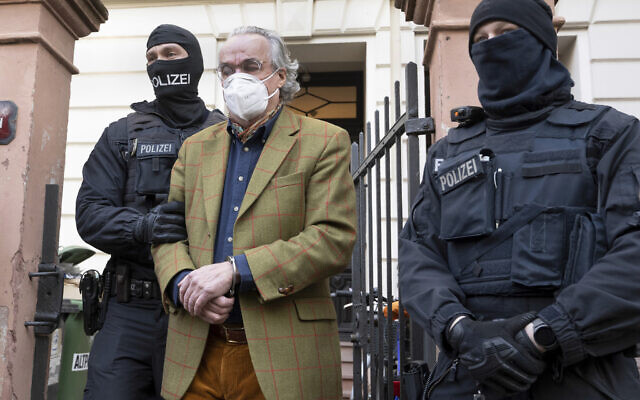 Some in Germany have questioned whether the suspected extremists would actually have been able to pull off any serious attack.

But Germany’s top security official, Interior Minister Nancy Faeser, said it would be wrong to underestimate such groups, especially if their members include people who are trained to use firearms, such as soldiers or police officers.

The head of Germany’s Federal Criminal Police, Holger Muench, said officers searched about 150 locations across the country. At about 50 locations they found weapons, he told public broadcaster ZDF late Wednesday, without elaborating.

Muench said he expected the raids and detentions to continue in the coming days. 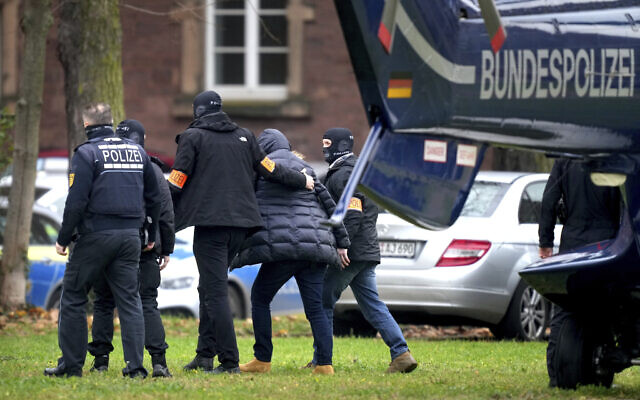 An suspect, second right, is escorted from a police helicopter by police officers after the arrival in Karlsruhe, Germany, December 7, 2022. (AP Photo/Michael Probst)

Thomas Haldenwang, who heads Germany’s domestic intelligence agency BfV, said authorities had been monitoring the group since the spring of this year.

The threat posed by the group had gradually become more concrete as members had obtained weapons, he said.

Federal prosecutors have said the group is alleged to have believed in a “conglomerate of conspiracy theories consisting of narratives from the so-called Reich Citizens as well as QAnon ideology.” Adherents of the Reich Citizens movement reject Germany’s postwar constitution and have called for bringing down the government, while QAnon is a global conspiracy theory with roots in the United States.

They also allegedly believe Germany is ruled by a so-called “deep state.”

Germany is highly sensitive to far-right extremism because of its Nazi past and repeated acts of violence carried out by neo-Nazis in recent years, including the killing of a regional politician and the deadly attack on a synagogue in 2019.

Two years ago, far-right extremists taking part in a protest against the country’s pandemic restrictions tried and failed to storm the Bundestag building in Berlin.

Factories with hazardous materials not prepared for earthquakes, ministry warns