A Jewish Israeli woman arrested for spying for Iran in December attempted to commit suicide at her home in Holon on Thursday, Hebrew media reported.

Paramedics arrived at her home and found that she had tried to overdose on pills, and was taken to an unnamed hospital in critical condition, according to the reports.

The Shin Bet security service said in January that they had arrested five Jewish Israelis accused of assisting an Iranian operative, Rambod Namdar, who often pretended to be a Jewish man, in gathering intelligence and making connections in Israel.

Two of the suspects include the woman from Holon and her husband, whose names are barred from publication. According to the Shin Bet, the wife, who worked as a presenter at a radio station, was in contact with Namdar and passed along photos of government offices over the course of several years.

Her husband was accused by the Shin Bet of being aware of the connection, speaking with the Iranian operative himself, as well as transporting her to the US Consulate to photograph it. 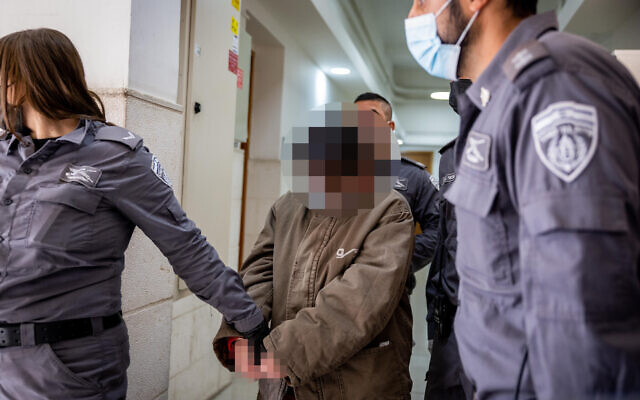 A woman accused of making contact with a foreign agent from Iran arrives for a hearing at the Jerusalem District Court, January 20, 2022. (Yonatan Sindel/Flash90)

The husband denied the accusations against him and his wife during an interview with Channel 12 news on Thursday evening following his wife’s suicide attempt, and accused the Shin Bet of extracting a false confession from her.

“For the past eight months, our life has turned into hell,” the husband said.

According to him, as soon as his wife became suspicious of Namdar’s intentions, “she cut off contact.” Despite that, he alleged that his wife “experienced abuse” at the hands of the Shin Bet during her interrogations and while she was detained, claiming they forced her to admit to the alleged crimes.

The man noted that while in court, it was revealed that the individual who drew up charges was not a Persian speaker: “So how can he come and accuse us of spying?”

He asserted that he was raised with a love of Israel and was not capable of committing the crimes levied against him by the authorities: “I come from a Zionist home, that’s how I was educated. Love for the land of Israel.” 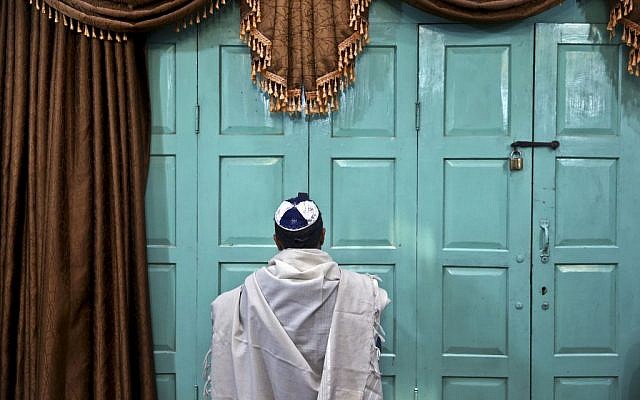 Illustrative: In this photo from November 20, 2014, an Iranian Jewish man prays at the Molla Agha Baba Synagogue, in the city of Yazd 420 miles (676 kilometers) south of the capital Tehran, Iran. (AP Photo/Ebrahim Noroozi)

The Shin Bet said that it “rejects with disgust” links between the woman’s suicide and their investigation, and “wishes her a full recovery.”

According to the Shin Bet in January, none of the suspects allegedly involved in the case had access to significant classified material, and there was no indication that this spy ring seriously compromised national security. It did, however, reveal a potential weak point that could be used by Iran in the future, but did not go into further detail.

Judah Ari Gross and Jeremy Sharon contributed to this report.