The Labor party said Wednesday it will hold a rally commemorating the assassination of prime minister Yitzhak Rabin just days ahead of the upcoming election.

The rally is slated for downtown Jerusalem on Saturday, October 29, shortly before the November 1 national vote.

It will mark 27 years since Rabin was assassinated by right-wing extremist Yigal Amir on November 4, 1995. The annual rally is usually held on the Saturday immediately before or after November 4.

Last year’s rally was canceled due to a lack of funding, leading to the Labor party’s decision to finance this year’s rally. The party, which Rabin led up until his death, has faced criticism for not funding the rally before.

“The memorial rally for prime minister Yitzhak Rabin is the event where we all remember the terrible murder that was the result of incitement and violence against Rabin and against the courageous policy he led,” said Labor leader Merav Michaeli.

“The Labor Party, Yitzhak Rabin’s party, will continue to campaign on the issues he prioritized, to follow his path in defending democracy and the State of Israel, and will fight with all its might against incitement and racism.” 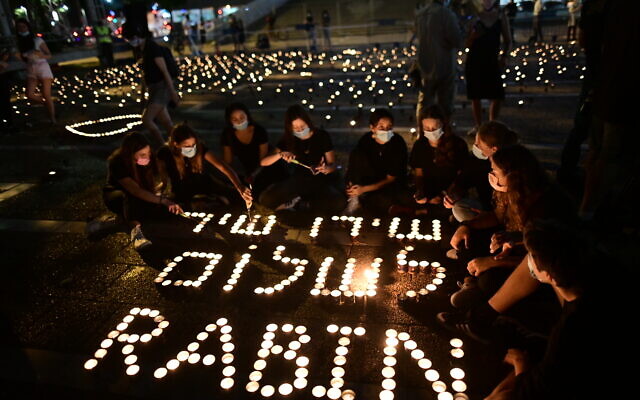 A display of 25,000 memory candles — some forming the words ‘Rabin’ and ‘Sing a song for peace’ — in honor of the 25th anniversary of the assassination of former Prime Minister Yitzhak Rabin at Rabin Square in Tel Aviv, October 29, 2020. (Tomer Neuberg/Flash90)

Right-wing parties had raised concerns that Israel’s will left would leverage the rally for political gain back when the Knesset was dispersed in June, and attempted to change the planned date of the elections to October 25, to no avail.

On Wednesday, President Isaac Herzog alluded to Rabin’s assassination in a speech that condemned political extremism and violence ahead of November’s election.

“One cannot avoid the disturbing thought: What’s next? Knives? Gunfire? Fatalities?” Herzog asked, saying that “we have already been through this story.”

Herzog cautioned politicians and voters across the spectrum to be “a voice of moderation and responsibility” in the charged pre-election atmosphere.

Political threats and polarization were rampant in the lead-up to Rabin’s murder, as the left and right battled over the shape of the state in the shadow of the Oslo Accords and increased Palestinian autonomy.

Carrie Keller-Lynn contributed to this report.

Jerusalem gets bins for recyclable containers and wrappers, after years of delay

‘A crisis of trust’: Deri said to rage at Netanyahu over broken coalition promises

Amid troop violence toward civilians, army warns of repercussions for ‘immoral’ acts

US Muslim leaders explore Israel: ‘The Abraham Accords give hope’

Bird flu detected in Israel in 2nd case within days

Lapid: Netanyahu wants to dismantle democratic foundations of the country

Asian faiths try to save sacred swastika, a symbol of peace corrupted by Hitler

Monkeypox to be renamed mpox to avoid racism concerns, WHO says

In first, 4 children from South Sudan to get life-saving heart surgery in Israel