The prisoners at the penal colony in St. Petersburg were expecting a visit by officials, thinking it would be some sort of inspection. Instead, men in uniform arrived and offered them amnesty — if they agreed to fight alongside the Russian army in Ukraine.

Over the following days, about a dozen or so left the prison, according to a woman whose boyfriend is serving a sentence there. Speaking on condition of anonymity because she feared reprisals, she said her boyfriend wasn’t among the volunteers, although with years left on his sentence, he “couldn’t not think about it.”

As Russia continues to suffer losses in its invasion of Ukraine, now in its sixth month, the Kremlin has refused to announce a full-blown mobilization — a move that could be very unpopular for President Vladimir Putin. That has led instead to a covert recruitment effort that includes using prisoners to make up the manpower shortage.

This also is happening amid reports that hundreds of Russian soldiers are refusing to fight and trying to quit the military.

“We’re seeing a huge outflow of people who want to leave the war zone — those who have been serving for a long time and those who have signed a contract just recently,” said Alexei Tabalov, a lawyer who runs the Conscript’s School legal aid group.

The group has seen an influx of requests from men who want to terminate their contracts, “and I personally get the impression that everyone who can is ready to run away,” Tabalov said in an interview with The Associated Press. “And the Defense Ministry is digging deep to find those it can persuade to serve.”

Although the Defense Ministry denies that any “mobilization activities” are taking place, authorities seem to be pulling out all the stops to bolster enlistment. Billboards and public transit ads in various regions proclaim “This is The Job,” urging men to join the professional army. Authorities have set up mobile recruiting centers in some cities, including one at the site of a half marathon in Siberia in May.

Regional administrations are forming “volunteer battalions” that are promoted on state television. The business daily Kommersant counted at least 40 such entities in 20 regions, with officials promising volunteers monthly salaries ranging from the equivalent of $2,150 to nearly $5,500, plus bonuses. 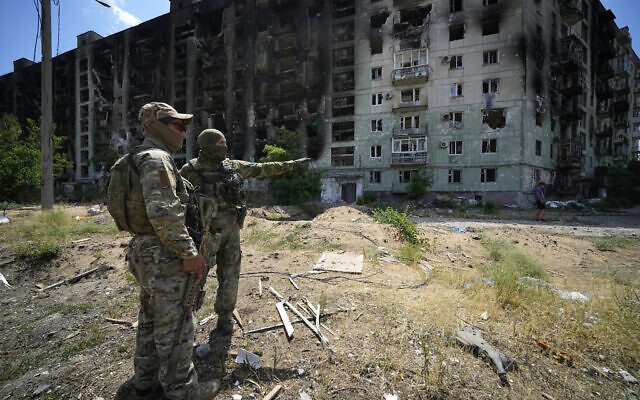 Russian soldiers talk to each other near an apartment building damaged during fighting between Russian and Ukrainian forces in Severodonetsk, on the territory which is under the Government of the Luhansk People’s Republic control, eastern Ukraine, July 12, 2022. (AP)

The British military said this week that Russia had formed a major new ground force called the 3rd Army Corps from “volunteer battalions,” seeking men up to age 50 and requiring only a middle-school education, while offering “lucrative cash bonuses” once they are deployed to Ukraine.

But complaints also are surfacing in the media that some aren’t getting their promised payments, although those reports can’t be independently verified.

In early August, Tabalov said he began receiving multiple requests for legal help from reservists who have been ordered to take part in a two-month training in areas near the border with Ukraine.

The recruitment of prisoners has been going on in recent weeks in as many as seven regions, said Vladimir Osechkin, founder of the Gulagu.net prisoner rights group, citing inmates and their relatives that his group had contacted.

It’s not the first time that authorities have used such a tactic, with the Soviet Union employing “prisoner battalions” during World War II.

Nor is Russia alone. Early in the war, Ukrainian President Volodymyr Zelensky promised amnesty to military veterans behind bars if they volunteered to fight, although it remains unclear if anything came out of it.

In the current circumstances, Osechkin said, it isn’t the Defense Ministry that’s recruiting prisoners — instead, it was Russia’s shadowy private military force, the Wagner Group.

Yevgeny Prigozhin, an entrepreneur known as “Putin’s chef” because of his catering contracts with the Kremlin and reportedly Wagner’s manager and financier, brushed aside reports that he personally visited prisons to recruit convicts, in a written statement released by his representatives this month.

Prigozhin, in fact, denies he has any ties to Wagner, which reportedly has sent military contractors to places like Syria and sub-Saharan Africa.

According to Osechkin, prisoners with military or law enforcement experience were initially offered the chance to go to Ukraine, but that later was extended to inmates with varying backgrounds. He estimated that as of late July, about 1,500 might have applied, lured by promises of big salaries and eventual pardons.

Now, he added, many of those volunteers — or their families — are contacting him and seeking to get out of their commitments, telling him: “I really don’t want to go.”

According to the woman whose boyfriend is serving his sentence at the penal colony in St. Petersburg, the offers to leave the prison are “a glimmer of hope” for freedom. But she said he told her that of 11 volunteers, eight died in Ukraine. She added that one of the volunteers expressed regret for his decision and doesn’t believe he will return alive.

Her account couldn’t be independently verified, but was in line with multiple reports by independent Russian media and human rights groups. 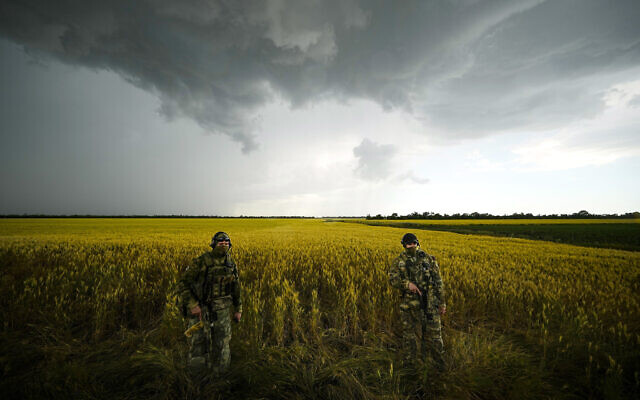 Russian soldiers guard an area next to a field of wheat as foreign journalists work in the Zaporizhzhia region in an area under Russian military control, southeastern Ukraine, June 14, 2022. (AP)

According to those groups and military lawyers, some soldiers and law enforcement officers have refused deployment to Ukraine or are trying to return home after a few weeks or months of fighting.

Media reports about some troops refusing to fight in Ukraine started surfacing in the spring, but rights groups and lawyers only began talking about the number of refusals reaching the hundreds last month.

In mid-July, the Free Buryatia Foundation reported that about 150 men were able to terminate their contracts with the Defense Ministry and returned from Ukraine to Buryatia, a region in eastern Siberia that borders Mongolia.

Some of the servicemen are facing repercussions. Tabalov, the legal aid lawyer, said about 80 other soldiers who sought to nullify their contracts were detained in the Russian-controlled town of Bryanka in the Luhansk region of eastern Ukraine, according to their relatives. Last week, he said that the Bryanka detention center was shut down because of the media attention.

But the parent of one officer who was detained after trying to get out of his contract told the AP this week that some are still being detained elsewhere in the region. The parent asked not to be identified out of safety concerns.

Tabalov said a serviceman can terminate his contract for a compelling reason — normally not difficult — although the decision is usually up to his commander. But he added: “In the conditions of hostilities, not a single commander would acknowledge anything like that, because where would they find people to fight?”

Alexandra Garmazhapova, head of the Free Buryatia Foundation, told the AP that soldiers and their relatives complain of commanders tearing up termination notices and threatening “refuseniks” with prosecution. As of late July, the foundation said it had received hundreds of requests from soldiers seeking to end their contracts. 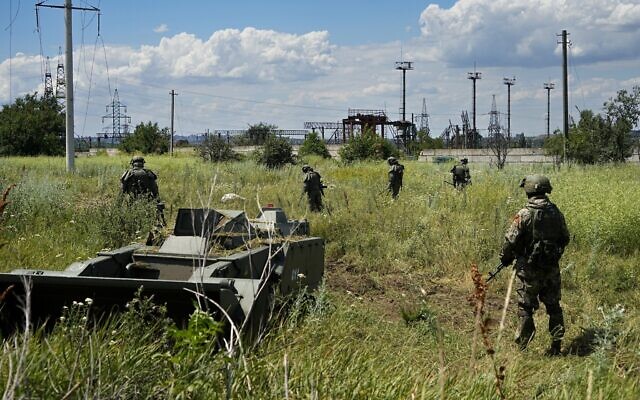 Russian mine clearing experts work to find and defuse mines along the high voltage line in Mariupol, on the territory which is under the Government of the Donetsk People’s Republic control, eastern Ukraine, July 13, 2022. (AP)

Tabalov said some soldiers complain that they were deceived about where they were going and didn’t expect to end up in a war zone, while others are exhausted from fighting and unable to continue.

Rarely, if at all, did they appear motivated by antiwar convictions, the lawyer said.

Russia will continue to face problems with soldiers refusing to fight, military analyst Michael Kofman said, but one shouldn’t underestimate Russia’s ability to “muddle through… with half-measures.”

“They’re going to have a lot of people who are quitting or have people who basically don’t want to deploy,” said Kofman, director of the Virginia-based Russia Studies Program at the Center for Naval Analyses, on a recent podcast. “And they’ve employed a lot of measures to try to keep people in line. But ultimately, there’s not that much that they can do.”

Probable biological mother in embryo mix-up: ‘I wish I could hug the other woman’

US would know if Russia preparing nuclear strike on Ukraine, experts say

In Kaunas, a British artist shines light on Holocaust massacre forgotten by locals

‘I went to shul more than most of you’: Biden hosts High Holiday reception

Iran says 19 killed in attack on police station; unclear if tied to protests