Israel’s tourism industry is continuing to bounce back and slowly heading for pre-pandemic levels, according to figures released by the Tourism Industry this week.

July 2022 had nearly 22% fewer tourism entries than the corresponding period in 2019, a record tourism year for Israel. That year, the country registered a record number of 4.9 million tourist entries, of which 4.6 million were tourists who stayed at least one night, according to government data published in early 2020. Tourism activity in 2019 brought in about $7 billion to the economy that year.

Once the COVID-19 crisis began and lockdowns were imposed, visitor numbers plummeted and businesses were battered. Tour guides struggled and were told to retrain for other professions as recently as six months ago.

But inbound tourism has been bouncing back slowly. Between January and May 2022, about 785,000 foreign tourists entered Israel, up from about 400,000 in all of 2021, according to the Tourism Ministry.

In July, some 249,000 tourists entered the country, compared to 49,000 in July 2021, but below July 2019 with roughly 340,000 tourist entries. The highest number of tourists arriving in July was from the United States, with 81,800 arrivals, representing almost a third of all tourist arrivals to Israel.

The overall data supports Tourism Ministry estimates that 2022 may see between 2.2 and 2.5 million tourist visits, an indication that Israel’s tourism industry is well into its post-pandemic recovery. 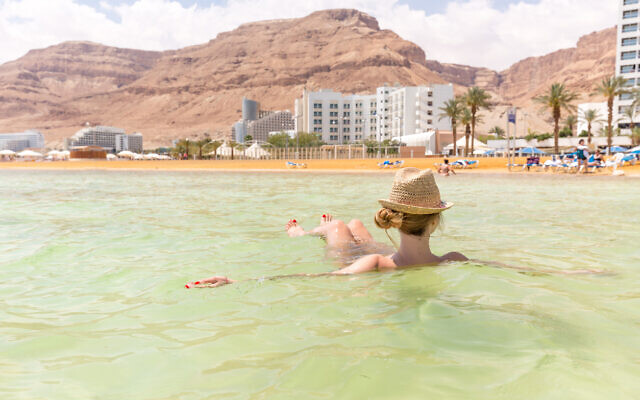 A woman floats in the Dead Sea at Ein Bokek. Illustrative. (Subbotsky via iStock by Getty Images)

According to the Israel Hotel Association, June saw a total of around 2.1 million overnight stays, just 5% below June 2019 levels. But that number is mostly made up of local stays by Israelis vacationing at home. Approximately 1.5 million were Israeli overnight stays, down from June 2021 (when it was difficult to fly overseas), but an increase of 18% compared to June 2019.

The Israel Hotel Association believes “the Israeli public continues to express confidence in the local hotel industry and thanks to this, the upward trend in hotel stays continues. The recovery of inbound tourism is still slow compared to 2019, but we anticipate that the flow of inbounds will increase significantly by the end of the year.”

Tourism Minister Yoel Razvozov said in a press statement, “It is important to understand that after the [pandemic], the tourism industry could not have suffered another blow.” He welcomed the end of  Operation Breaking Dawn, a three-day military conflict between Israel and the Palestinian Islamic Jihad terror group in the Gaza Strip, on Sunday and said it would “preserve the tourism industry, so that it would continue to bring in revenue to the Israeli economy.” 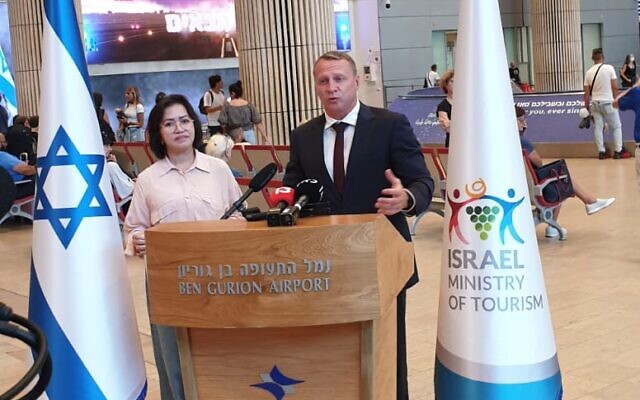 The Hotel Association said it is hopeful of a rebound to 2019 levels by 2023. Most of Israel’s hotel groups have plans to add rooms, with a record for construction starts last year. These hotels will come into the market across the country over the next couple of years, as with tourist numbers forecast to rise to the stated goal of 10 million tourists a year by 2030.

Meantime, 1,007,300 Israelis exited the country in July, most of them traveling by air. Combined with the approximately 10,500 arrivals each day in July (over 310,000 for the month), this explains the much-publicized overcrowding at Ben Gurion Airport this summer.

Israel reopened its borders to fully vaccinated foreigners in January after shutting them out for most of the pandemic. In March, it allowed unvaccinated tourists to enter, and in May it ended all COVID testing for arriving passengers.