The Allenby Bridge border crossing between the West Bank and Jordan will begin a pilot in which it will operate 24 hours a day, every day of the week, US Ambassador to Israel Tom Nides announced Wednesday.

All-hours access to the crossing, which is operated by the Israel Airports Authority on the West Bank end of the bridge, was declared as a goal by US President Joe Biden when he visited the country in July. At the time, the US set a deadline for September 30 but Israeli media reports since said it would not be met due to a lack of resources.

Nides announced the development in a tweet and thanked the Prime Minister’s Office, the Transportation Ministry, the airports authority and the government’s Israeli liaison office with the Palestinian territories, known as COGAT.

“It’s worth the investment to get to 24/7 access and will make a real difference in people’s lives!” Nides tweeted.

At a press conference in Jerusalem, Nides said that the pilot was supposed to have started on Friday but was delayed due to the Jewish High Holidays, which began with Rosh Hashanah on Sunday evening and will continue until mid-October. Nides said the Allenby pilot is now scheduled to start on October 24.

An Israel Airports Authority spokesperson confirmed the start date for the pilot, but did not offer any other details.

It was not clear how long the trial period would continue. 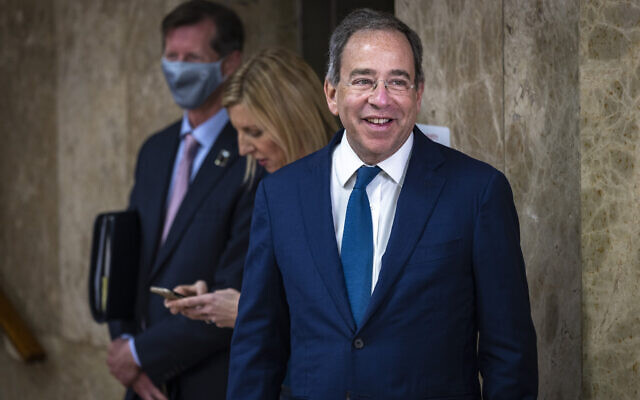 US Ambassador to Israel Tom Nides, at the Prime Minister’s Office in Jerusalem, on March 27, 2022. (Olivier Fitoussi/Flash90)

The Allenby crossing is currently only open from 8 a.m. to 11:30 p.m. during the week and 8 a.m. to 3:30 p.m. on weekends, and queues can last hours or up to an entire day to cross into Jordan, creating a headache for Palestinians.

Earlier this month US Assistant Secretary for Near Eastern Affairs Barbara Leaf told reporters that opening the crossing 24/7 was one of the issues Washington was pushing as a way to improve cooperation between Israel and the Palestinian Authority amid an ongoing spike in West Bank violence.

Leaf reported on her visit to the region in August. She said the Allenby crossing and the granting of 4G cellular access to Palestinians were two projects she had pushed Israel to follow through on. Biden announced the 4G access during his visit too.

In August, the Walla news site reported that after Israel authorities expressed pessimism about meeting the target date, US officials escalated the matter with Transportation Minister Merav Michaeli, demanding that she ensure obligations were fulfilled on time.

While Michaeli apparently committed to trying, she reportedly made it clear to the US representatives that a lack of staff was likely to stand in the way of Israel meeting the September 30 deadline.

Still unsatisfied, the US representatives engaged US National Security Adviser Jake Sullivan to raise the issue when he met later that month in Washington with Defense Minister Benny Gantz, according to the report.