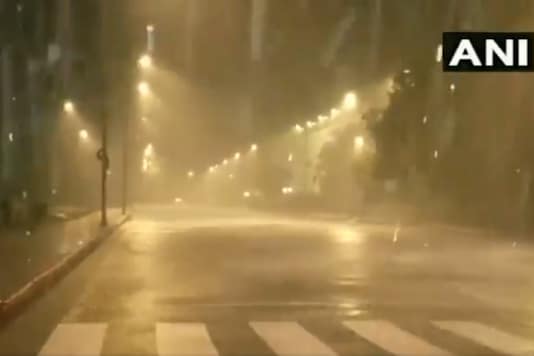 The Safdarjung Observatory, which provides representative figures for Delhi, recorded 33.6 mm rainfall till 5:30 am. The Palam station gauged 43.4 mm precipitation, the weatherman said.

A fresh bout of rain and high-velocity winds lashed the national capital overnight, bringing the mercury down by several notches on Sunday morning.

Light rain and generally cloudy weather is expected during the day.

The Safdarjung Observatory, which provides representative figures for Delhi, recorded 33.6 mm rainfall till 5:30 am. The Palam station gauged 43.4 mm precipitation, the weatherman said.

Rainfall recorded below 15mm is considered light, between 15 and 64.5 mm is moderate, and above 64.5mm is heavy, according to the India Meteorological Department.

Humidity levels also shot up to 100 per cent.

More rain is expected over the next three to four days, Kuldeep Srivastava, the head of IMD's regional forecasting centre, said.

The maximum temperature is expected to drop to 34 degrees Celsius by Wednesday.

The monsoon reached Delhi on June 25. Normal rainfall is predicted in the national capital during the season.

US co must buy Tiktok, or it will be shut on Sep 15

India should have been invited to China’s quadrilateral: Madhesi leader

Ayodhya dispute is over, will attend puja: litigant

Why language has been a sensitive matter?

‘Hospital under construction in Anantapur not super-speciality facility’

Surge in COVID-19 cases in Kerala due to 'laxity' in following precautions, says Pinarayi Vijayan

Villagers obstruct burial of nurse who died of COVID-19

No compromise on territorial integrity: India to China during 5th round of military talks

Over 800 villages flooded in UP as rivers swell; IMD forecasts very heavy rainfall in MP, Odisha

Google to bring Pixel 4a to India in Oct

CM criticised for getting admitted to private hospital

Imparting education to tribals in their languages won’t be hard

Despite high recovery rate, plasma donation yet to pick up

Search on for virus patients who gave false information

Report on leopard sightings to be released soon

Curfew in Srinagar for two days

Roja lashes out at Naidu, Pawan

Tobacco growers urge board to defer call on production

CM has mild COVID-19 symptoms; may stay in hospital for eight to 10 days

BJP leaders all praise for police