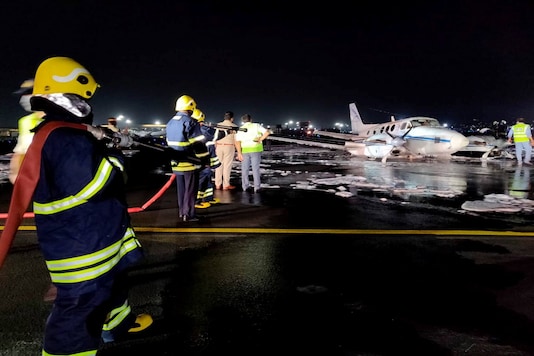 A chartered plane carrying five people, including a patient and a doctor, landed on its belly at Mumbai airport after declaring a full emergency, with the airport authorities foaming the runway to avoid the plane catching fire, in Mumbai, Thursday night, May 6, 2021. (PTI Photo)

The air ambulance flight headed for Mumbai lost a wheel while taking off from the Nagpur airport on Thursday.

A CISF jawan who spotted the falling rear landing gear of the air ambulance after it took off from Nagpur airport has been decorated with a cash reward and a commendation of the force chief, the civil aviation security force said on Friday. The plane carrying a total of five people, including a patient and a doctor, had belly-landed under full emergency protocols at the Mumbai airport Thursday night without any fatal casualties.

The air ambulance-a chartered flight with registration VT-JIL-had taken off from Bagdogra for Mumbai, but had a stopover at Nagpur for re-fuelling, it said. The Central Industrial Security Force (CISF) said in a statement that its head constable Ravi Kant Avala deployed at a watch tower near the runway of the Nagpur airport noticed around 5:50 pm that the “rear wheel of the aircraft fell off in the air".

The jawan immediately informed the matter over telephone to the Nagpur SOCC (security operational control centre) which in turn reported the matter to the air traffic control (ATC). “The Nagpur ATC quickly informed the pilot of the aircraft and arrangements were made at Mumbai airport for safe landing," the force said.

The plane had landed on a foamed runway at the Mumbai airport at about 9:09 pm Thursday and rescue authorities evacuated those onboard. “Had head constable Avala not shown alertness, a major tragedy could have occurred during the landing of the aircraft. The keen observation and mindful action taken by the CISF personnel averted a major accident and saved the lives of the pilots and passengers," the statement said.

CISF Director General S K Jaiswal has announced a cash reward of Rs 10,000, the top force honour of a DG commendation disc and certificate for Avala, it added. The CISF is a central armed police force that is designated as the national civil aviation security force guarding 64 air terminals of the country at present.

Aviation regulator DGCA will conduct an audit of Jet Serve Aviation Private Limited whose aircraft belly-landed at the Mumbai airport after losing one of its wheels, officials said on Friday. The air ambulance flight headed for Mumbai lost a wheel while taking off from the Nagpur airport on Thursday. It safely belly-landed at the Mumbai airport on a foam carpet later, they said.

A foam carpet is created on a runway by spreading foam using fire extinguishers so that a plane does not catch fire during an emergency landing. The officials said the company, Jet Serve Aviation, will undergo a full audit to understand the cause of this incident.

Based in Gurgaon, Jet Serve Aviation provides maintenance, repair and overhaul services along with charter flights. Civil Aviation Minister Hardeep Singh Puri had on Thursday tweeted about the incident.

“A Jet Serve ambulance with a patient onboard lost a wheel during takeoff from Nagpur. Showing immense presence of mind Capt Kesari Singh belly landed the aircraft on foam carpeting in Mumbai," he said. “All onboard are safe. Commendable effort by DGCA (Directorate General of Civil Aviation), CSMIA (Chhatrapati Shivaji Maharaj International Airport in Mumbai) and other agencies," the tweet added.

In a detailed statement, the Chhatrapati Shivaji Maharaj International Airport (CSMIA) in Mumbai said a full emergency was declared for the non-scheduled Beechcraft VT-JIL aircraft en route from Nagpur to Mumbai. “The flight carrying two crew members, one patient, a relative and one doctor did a belly-landing at CSMIA at 21:09 hrs," it noted.

The airport’s emergency response team, including fire and rescue responders, follow-me vehicles, the CISF and medical teams among many others were activated instantly and put on standby to provide immediate assistance to ensure the safe evacuation of the passengers, it said. “As a precautionary method, CSMIA also foamed RWY (runway) 27 in order to avoid the aircraft catching fire. All passengers were evacuated safely and flights operating in and out of CSMIA remain on schedule," the statement read.

Nagaland extends COVID-19 lockdown till 30 June; fourth extension since 14 May

In a Historic Move, Jammu & Kashmir Digitises Documents After Darbar Move Practice Was Halted for Covid

Maoists killed in exchange of fire in Visakhapatnam

Decision to increase gap between Covishield doses based on scientific evidence: NTAGI

Mithun Chakraborty turns 71: A playlist of the actor-turned-politician's best songs

Bihar Unlock 2.0: New lockdown relaxations in the state from today

International Day of Family Remittances 2021: Theme, significance and how digital ways have made the difference

COVID Aid Fund For India Likely To Be Used For Terror Activities: Report

'Commitment towards equality': Saraf Furniture to hire around 250 professionals from LGBTQ+ community

'Ramayana' actor Chandrashekhar Vaidya passes away at the age of 98

Mandatory gold hallmarking from today: How this will affect you