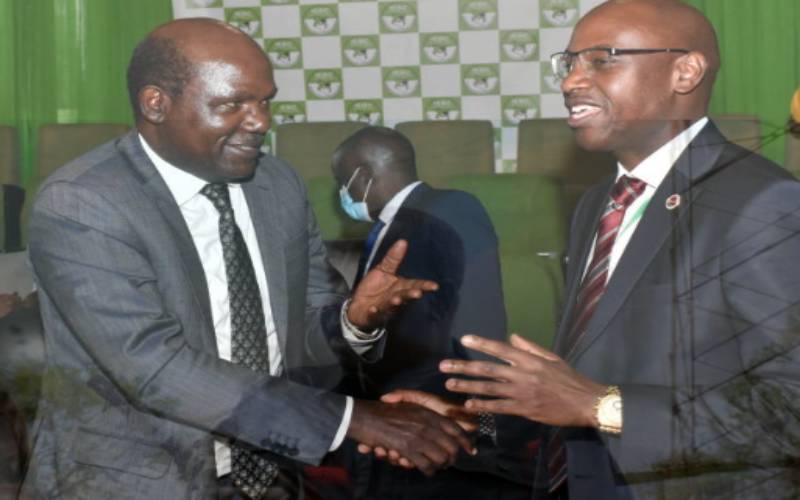 IEBC chairperson Wafula Chebukati (L) speaking with Walter Mong’are at the Bomas of Kenya on May 30, 2022. [Samson Wire, Standard]

The Independent Electoral and Boundaries Commission (IEBC) on Monday announced it had cleared four presidential aspirants for the August 9 polls.

Earlier, Walter Mong’are’s clearance certificate was revoked, despite being the first presidential aspirant to be cleared to run for the top office on May 30, 2022.

“We don’t question God; we trust in His process,” he tweeted.

On Monday, June 6, IEBC said they had discovered a discrepancy in his academic papers.

According to the Constitution, it is mandatory for a presidential candidate to be a holder of at least a bachelor’s degree.

IEBC chairperson Wafula Chebukati said they had summoned Mong’are to appear before the electoral agency on Monday afternoon to provide proof of his academic papers, but the aspirant failed to honour the summon.

“As the Returning Officer for the Presidential Election, upon discovery of new information on Walter Mong’are, as related to lack of academic qualifications, I invited him to appear before me today (Monday, June 6) at 2pm to clarify the issue. However, he failed to honour my invitation and I hereby revoke the nomination certificate of Walter Mong’are,” Chebukati said during a press conference at the Bomas of Kenya.

Mong’are’s party through a public statement sent by the Secretary General Naomi Cidi, now says it is not bowed yet.

“On behalf of Umoja Summit Party, I would like to express my gratitude to all our supporters despite the recent public announcement by IEBC revoking the clearance of our Presidential Candidate Mr Walter Mongare.

We would like to assure all Kenyans that we are seeking counsel and are committed to resolving this matter amicably for a favorable outcome. We are confident that our journey will resume. Umoja Summit Party assures you of our dedication to offering alternative leadership and reason to vote,” said Naomi.