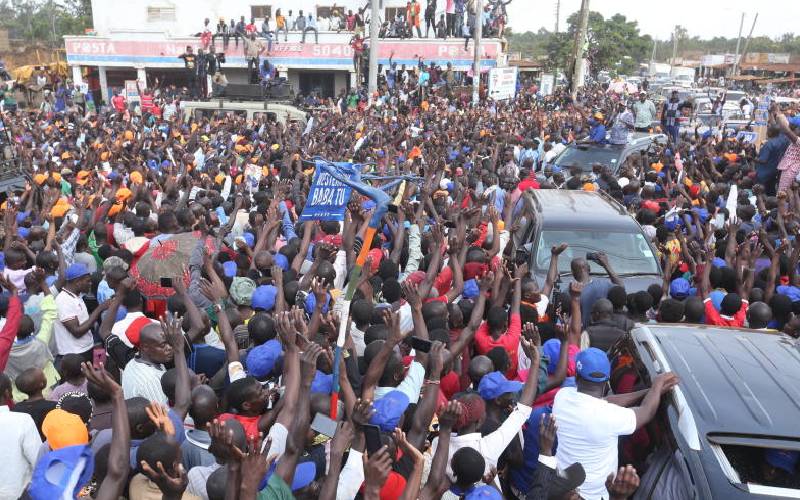 Raila said the pact signed by the UDA presidential hopeful on Wednesday that provides for, among other things, buying large swathes of land and compulsorily acquiring idle parcels at the Coast to settle squatters, was an “afterthought ploy” to dupe the 1.5 million voters.

“Ruto came up with that (idea) after he realised we (Azimio-One Kenya alliance) had expressed interest to employ a Coast son, Mombasa Governor Hassan Joho, to be the land minister with the sole purpose of working through the complex and often emotive land issues at the Coast and across the country,” he said.

Raila characterised Ruto as a ‘stranger’ to the Coast land issues, comparing him to jogoo wa mashambani (village rooster) who could not decisively handle urban problems (asiyewika mjini).

Raila urged the DP to “read Kenya’s history on land before coming up with knee-jerk action plans that won’t benefit the coastal people.”

Junet Mohamed (Suna East MP) said Raila had a history of reform and was best placed to deal with the country’s land issues. “Ruto has more than 1,000 acres of land, which he won’t share with the landless. He even has a history with Gilbert Muteshi’s land. How can he resolve the Coast land issue?” Junet said.

But activist Okiya Omtatah, who is vying for the Busia Senate seat on a National Reconstruction Alliance Party ticket, asked voters to elect candidates based on their development track record.

Central Organization of Trade Unions Secretary General Francis Atwoli urged voters to turn out in large numbers and vote for Azimio in all five counties of western Kenya.

“Raila has promised to give Governor Wycliffe Oparanya the Treasury ministry and Kenneth Marende the Speaker slot without conditions, unlike what Ruto is doing to our sons, Musalia Mudavadi and Moses Wetang’ula,” said Mr Atwoli.

“We got independence and a new Constitution. What is remaining is economic reforms that will ensure our youth and women get a decent living,” he said.