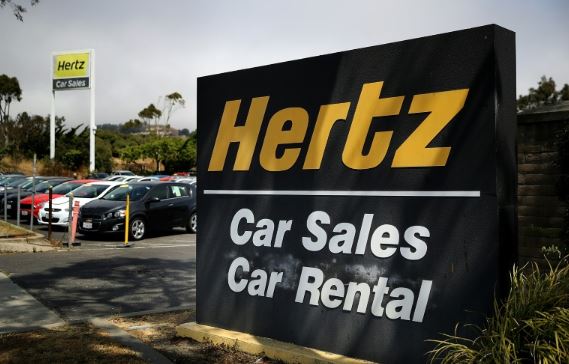 Established in 1918 with only a dozen cars, the global car rental giant had survived the Great Depression and numerous American recessions.

Business News
Established in 1918 with only a dozen cars, the global car rental giant had survived the Great Depression and numerous American recessions.

Global car rental company Hertz became the latest economic casualty of the coronavirus pandemic Friday, filing for bankruptcy in the US and Canada after more than a century in business. "The impact of COVID-19 on travel demand was sudden and dramatic, causing an abrupt decline in the Company's revenue and future bookings," Hertz said in a press release. Hertz said it took "immediate action" to prioritize the health and safety of employees and customers and eliminate "all non-essential spending". "However, uncertainty remains as to when revenue will return and when the used-car market will fully re-open for sales, which necessitated today's action," it said.

SEE ALSO: 'I'm trapped inside with my fiancé who I don't love anymore during lockdown'

Its main international operating regions, including Europe, Australia and New Zealand, were not included in the US Chapter 11 filing. Hertz had already cut 10,000 jobs in North America, or 26.3 percent of its global workforce, to save money after the coronavirus shutdowns paralyzed travel and crippled the economy. Chapter 11 is a mechanism that allows a company that is no longer able to repay its debt to restructure itself without creditors. The Wall Street Journal reported Friday that Hertz held debts of roughly $19 billion, in addition to nearly 700,000 vehicles sitting idle because of the coronavirus. "The financial reorganization will provide Hertz a path toward a more robust financial structure that best positions the Company for the future as it navigates what could be a prolonged travel and overall global economic recovery," the Hertz statement said.

SEE ALSO: Will pandemic push humans into a healthier relationship with nature?

Hertz' franchise sites, which are not owned by the company, are also not included in the Chapter 11 proceeding. Established in 1918 with only a dozen cars, the global car rental giant had survived the Great Depression and numerous American recessions. But in recent years the company has struggled with competition -- including Avis Budget and carpooling services such as Uber. Hertz suffered a fourth consecutive annual net loss in 2019. But 2020 had started well with an increase in turnover of six percent in January and eight percent in February compared to the same months of last year. The chapter 11 filing follows that of another well-known American business, retailer J. Crew, and illustrates the extent of the damage to the economy from the deadly disease.

More than 38 million people have applied for US unemployment benefits since the shutdown began in March. Federal Reserve chief Jerome Powell recently spoke of a likely 20 to 25 percent unemployment spike, after climbing to 14.7 percent in April. More than 1.6 million people have been infected with the coronavirus in the US and the pandemic has killed over 96,000 people, according to the Johns Hopkins University.
Hertz Coronavirus Bankruptcy Jobs
Feedback

Kindly click the button below to give us your feedback. Thank you!

Dimitar Berbatov: Coutinho doesn't need Manchester United. Brunu is very similar to him, so it would be pointless
The head of the Premier League: There is optimism that we will see spectators at stadiums next season
The Champions League final will be moved from Turkey. The match may take place in Lisbon (NY Times)
Inter have activated the option to extend young's contract and want to keep Sanchez in the team
5 matches of the Premier League and the championship game of Liverpool will be held on neutral fields at the request of the police
Rosel on prison in Spain: one idiot said I was a fucking Catalan and all Catalans should die
We went to the Danish stadium through Zoom: a 40-meter screen with video, a bulldog fan and attempts to sing at a distance of thousands of km
Source https://www.standardmedia.co.ke/business/article/2001372361/virus-hit-hertz-declares-bankruptcy

Europe moves ahead with lockdown easing, but caution in Asia

Kitale man killed as he tried to separate fighting couple

Why Kisii town is a new gem for real estate developers

K24 journalist who killed himself is buried

Rivatex spreads its wings to Nyanza

State: Madaraka projects in Kisii to go on as planned

Sh20b Thiba dam will be ready next year, says PS

Pay for play: Why musicians are saying âNo, thanksâ to Kamp, PRiSK and MCSK

Shock as Man Beheads Uncle, Takes Head to His Aunty

Mungiki Have Returned and Should Be Dealt With Ruthlessly, Says PS Kibicho

We Will Catch You, Kagwe Tells Covid-19 Escapee

Raila is Not God, I Will Not Beg, Says Ousted MP

Betty Kyallo Marvels at Daughter’s Growth: ‘Ivanna Had a Date With Her Dad’

Huddah Brags About Earning More Than President Uhuru on OnlyFans

‘Masaibu ya Njugush’ Set to Premiere Next Week – Watch Trailer

The Top Stories on the Internet Today (Friday May 29)

"No masks, no gloves": State under fire over quarantine centres

Father, son jailed for 20 and 15 years respectively for raping neighbour

Easyjet to axe 30 per cent of staff

Ministry shifts focus to counties as infections rise by 147

8 dead, 15 maimed just because of this cow

Five lies they told you about investment

Is Mudavadi repeating 2013 political mistakes? what with hosting useless delegations

If you you don’t support my agenda then resign, I appoint someone else- Uhuru tells DP Ruto

Businessman Pleads With DP Ruto to Settle Sh1.4M Debt Owed By His Hotel

‘KCPE, KCSE Exams Not a Ticket to Heaven, Postpone Them,’ Says Wilson Sossion

Sauti Sol: We Don’t Show Off Our Charity Work Because It Comes From the Heart

The Top Stories on the Internet Today (Thursday May 28)

Mapping the building blocks of corporate IT solution