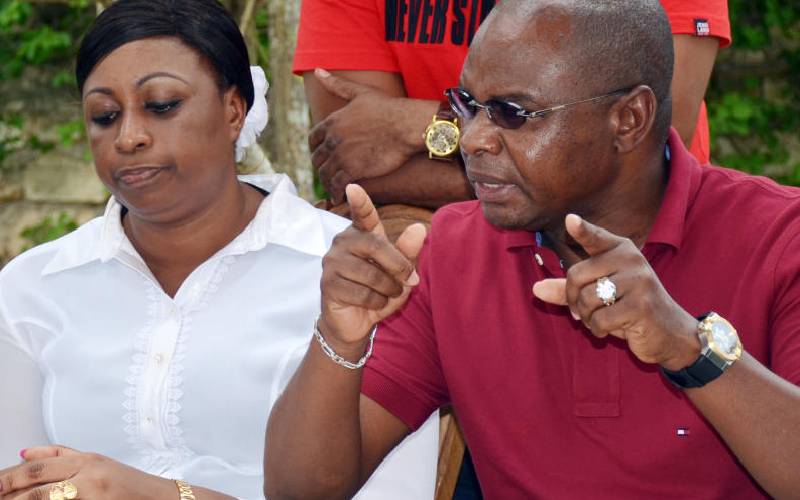 The DP was holding an economic forum at Karisa Maitha Grounds in Kilifi and had to implore the charged supporters of the two camps from clashing.

But yesterday’s chaotic scene was not an isolated case.

In the last four days, the DP has witnessed the rivalry between the two political parties in the Kenya Kwanza coalition at the Coast.

The friction between United Democratic Alliance (UDA) and PAA was evident during the DP’s tour in Taita Taveta, Kwale, Mombasa and Kilifi counties and he tried to calm down supporters in the uneasy political marriage.

Yesterday Ruto promised to come to address the problem saying his four-day tour was for listening to the people’s economic issues and not engaging in politics.

The DP held economic forums in Mombasa and Taita Taveta. On Friday, he had to postpone the one for Kwale to attend the national prayers in Nairobi.

Yesterday, the DP said if elected he will revive the collapsed Galana-Kulalu irrigation project that cuts across Kilifi and Tana River counties.

He also pledged to revive cashew nuts processing plant and promote coconut farming and the blue economy in the Coast region before he flew out to Tana River county to conclude his campaign tour.

“Put down the wheelbarrows. This is time to discuss economic issues of concern to the people of Kilifi County and not a campaign forum. I’ll come back to do politics,” he said as UDA supporters tried to dominate the forum cheering Ms Jumwa.

On Wednesday, Jumwa’s and Kingi’s supporters clashed at a rally presided over by Ruto at Msabani grounds in Malindi. Before Ruto arrived at the venue in the company of the PAA party leader and Kilifi governor, Ms Jumwa had announced that she had organised the meeting.

But Ms Kombe said their focus is on the voters and not rival leaders trying to elbow them out of the political space.

“I can confirm that there is infighting but this is expected. Our focus is the voter on the ground. We are prepared for the push and shove,” she said.

“Ruto has the right to support whoever he wants. But PAA has its governor candidate George Kithi and we are firmly behind him as a party.”

Rabai UDA parliamentary aspirant Philip Mbaji argued that the friction among siblings in Kenya Kwanza was healthy as long as it does not involve zoning or suffocation of specific candidates of any of the parties.

He said that from the recent public rallies in Malindi and Mariakani in Kilifi county, it was clear that UDA was the party to beat in Kilifi and the Coast at large.

“That our counterparts PAA could not crow at their perceived stronghold shows UDA is going places. It is poised to be the party to produce majority seats,” he said.