Washington - Cambodian Prime Minister Hun Sen, long friendly with Moscow, took pains Thursday to explain to his ruling party and government why his administration joined dozens of other countries in co-sponsoring this week's U.N. resolution condemning Russia's invasion of Ukraine.

'We do not support the use of force and readiness to use force or the threatened use of force,' he said in an audio message that also expressed the hope that Russia would 'understand' his decision.

He said that Cambodia could not remain silent as Russia countered the Southeast Asian nation's own policies and 'the situation in Ukraine worsens,' according to a transcript of the message released to the public by the office of the spokesperson of the Royal Government of Cambodia on Thursday night.

Hun Sen also said his government was working to address the crisis within the framework of the Association of Southeast Asian Nations, of which Cambodia is chair this year.

Hun Sen said that Cambodia needed to act within the framework of Cambodia's own policies, as well as those of ASEAN. 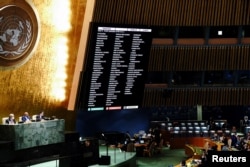 FILE - A general view shows the results of the voting during the 11th emergency special session of the U.N. General Assembly on Russia's invasion of Ukraine, at the United Nations Headquarters in Manhattan, New York City, March 2, 2022.

Nearly 100 countries co-sponsored the resolution, which was introduced in the General Assembly after Russia vetoed a similar motion at the U.N. Security Council last week.

Of the 193 U.N. member states, 181 countries voted on the resolution Wednesday. Among them, 141 countries supported the resolution condemning Moscow. Five countries - Russia and its allies Belarus, Syria, North Korea and Eritrea - opposed it. Thirty-five countries abstained, including China, a close ally of Cambodia's; India; and ASEAN members Vietnam and Laos.

Russian troops invaded Ukraine on February 24, bringing the capital, Kyiv, and other cities under siege. More than 1 million Ukrainians have fled to neighboring countries, and if the conflict does not end soon, millions more will be forced to flee Ukraine, according to Filippo Grandi, the U.N. high commissioner for refugees.

Hun Sen, who has been prime minister since 1985, said that many countries were condemning the war in Ukraine, and Cambodia needed to take a clear position. He added that at the request of Japan, France, Germany and the United States, Cambodia decided to co-sponsor the resolution with other countries as a matter of necessity.

Hun Sen added that while he understood the move would anger Russia, Cambodia, as a sovereign state, has the right to act and must 'protect the truth.' It also has a responsibility as a U.N. member.

The U.S. Embassy in Phnom Penh welcomed the statement. 'The United States is pleased to see Cambodia and Singapore join us and other nations in co-sponsoring a resolution deploring Russian aggression and demanding an end to its unprovoked war against Ukraine,' it said.

'The resolution was supported by most ASEAN nations. The world is taking action to hold Russia accountable.'

Singaporean Foreign Minister Vivian Balakrishnan on Monday imposed rare unilateral sanctions on Russia, describing the attack on Ukraine as 'an unprovoked military invasion of a sovereign state.' Singapore is also an ASEAN member.

'I believe that whenever we see one country invading another, we cannot take a middle position,' CNRP acting President Sam Rainsy told VOA Khmer late Wednesday. 'We must condemn the country that invaded' and 'help protect' the affected country if possible.

Sam Rainsy also called on democratic countries to stand up for the protection of democracy. He praised the spirit of the Ukrainian people fighting to protect the freedom and sovereignty of the country.