The world watches as Israel continues its modern-day Apartheid against the Palestinian people.

Rabat – Violence has continued in Palestine as exchanges of Israel / Hamas rocket fire followed the attacks by Israeli security forces at al-Aqsa Mosque on Friday, May 7. Western media have continued to downplay Israel’s role in the conflict, claiming that Hamas incited the violence.

As Hamas is considered a terrorist organization by the US, the EU, and other western powers, many news outlets are confusing the plight of the Palestinian people with state-sanctioned violence and acts of terrorism.

The largest US conservative news organization, Fox News, reported on the situation in Jerusalem with the headline “Hamas rockets escalate tensions across Israel.” Meanwhile, Israel has continued to bombard Gaza with airstrikes from aircraft and drones.

The first Israeli airstrike killed 24 people, including nine children, and wounded many others.

Other media outlets like the New York Post have been accused of spreading false news. Following the first Israeli airstrike, the New York Post tweeted, “Airstrikes from Hamas militants kill 20 in Israel, including nine kids.” 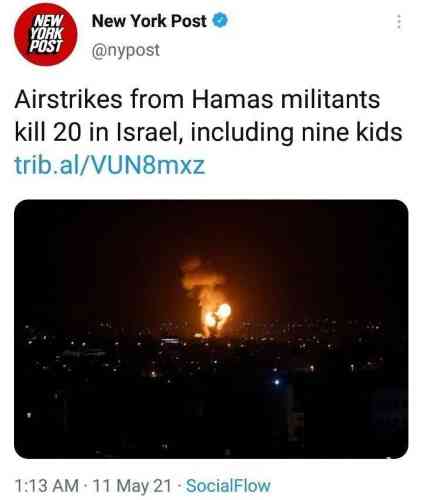 Social media users were quick to point to the pro-Israel bias of major  outlets like the New York Times (NYT). In an Instagram post, one user shared information on NYT author Isabel Kerchner, who is known to have personal ties to Israel.

Although both sides have exchanged artillery, some western media outlets are covering the conflict as if it were a fair fight. Hamas has no air-to-ground capabilities and Israel continues to escalate the attacks on Gaza.

History and future of region

The modern state of Israel was established in 1948 after British occupation forces left the region. The declaration of the new state reignited the age-old conflict for control over the holy city of Jerusalem.

Palestinians have been fighting for international recognition of their claim to the land to no avail. Israel began colonization by building illegal settlements in 1967 in Gaza, the West Bank, and the Golan Heights.

Currently, Israel continues to illegally and forcibly evict Palestinians from their homes. It now controls the majority of the territory and many Palestinians live under Israeli rule with fewer rights than their Israeli counterparts.

International actors such as Egypt, the US, and other Arab nations have attempted to broker peace treaties between Israel and Palestine but hopes for a two-state solution are fading as Israeli attacks continue to escalate.

The latest conflict erupted after Israeli security forces attacked a crowd of Palestinians at Al-Aqsa mosque in Jerusalem. While Egypt has offered to lead a peace discussion and the UN Security Council has held numerous emergency meetings, most experts maintain that continued Western – especially American – support for Israel is the main reason for the country’s behavior.

It's great that we have 82 million trainers again, not 82 million virologists. Goretzka about the Interest in the Euro in Germany
Kritsyuk signed a 3-year contract with Gil Vicente
Man City have offered 100 million pounds for Kane and are ready to include their players in the deal. Tottenham vs
Fiorentina has agreed a contract with the coach of La Spezia Italiano
Marchisio said that all the players of the Italian national team should have taken a knee. He later added that there should be freedom of choice
England will do their hair like Foden if they win the Euro
Manchester United are ready to trade Pogba for Varane. Real Madrid want to sell the defender to sign Mbappe or Holand