A junta battalion commander was among at least 21 Myanmar regime forces killed in clashes with People’s Defense Force groups (PDFs) and an ethnic armed organization (EAO) in the last three days across the country.

Incidents were reported in Shan State and Mandalay, Sagaing, Bago and Tanintharyi regions.

The Irrawaddy has rounded up the following reports of significant attacks from PDFs and the EAO.

Military battalion commander among many killed during intense clash in Shan

At least 10 regime troops including a battalion commander were killed by the Myanmar National Democratic Alliance Army (MNDAA) during an intense clash in the Chin Shwe Haw area in Laukkai District in Shan State on Tuesday, said The Kokang, the media wing of the MNDAA.

A fierce clash broke out when 500 regime forces attempted to occupy an MNDAA strategic base on Nank Phar Mountain. In the clash, more than a dozen regime forces including three army officers were also injured.

After six hours of fighting, regime forces retreated from the area and many dead bodies of soldiers were abandoned at the clash site, The Kokang said.

All PDF groups had to abandon their attempted raid when two military helicopter gunships attacked them. 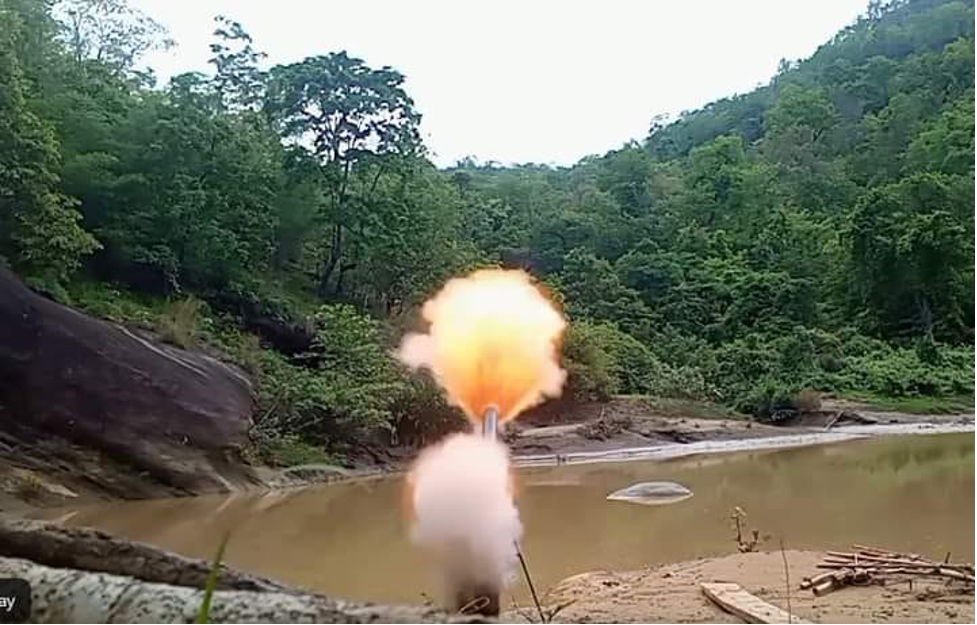 Casualties were unknown. Regime forces and pro-regime Pyu Saw Htee militia members who have been stationed at the village for over a year have been raiding, looting and burning houses in nearby villages.

On Sunday, regime forces also attempted to raid and burn houses in Pyar Thone Village. However, they were forced to retreat by the daring PDF attack. 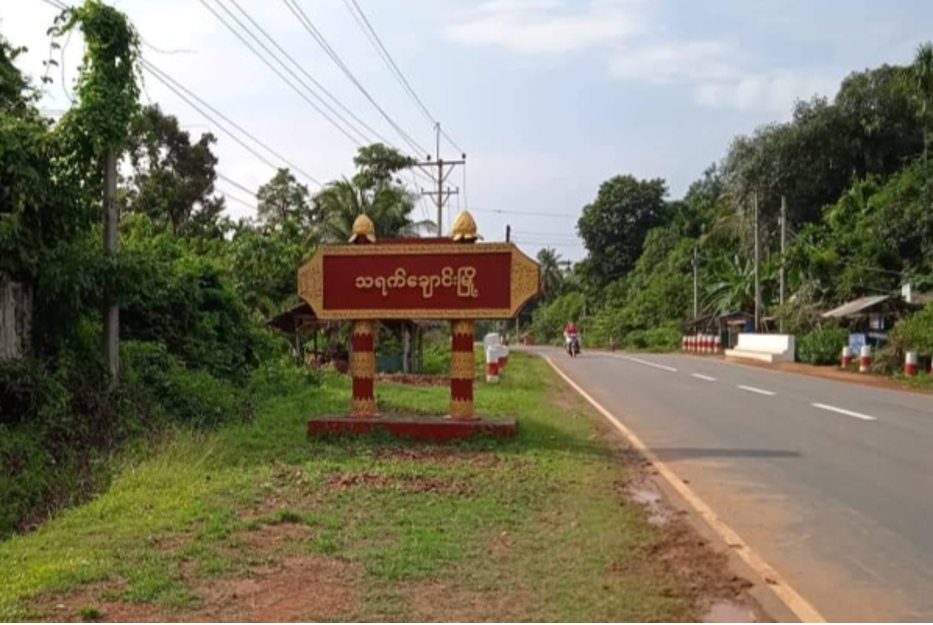 The entrance to the town of Thayarchaung in Tanintharyi / CJ

The vehicles were on their way to a military base after retrieving the body of army Major Win Htay Naing when they were ambushed with land mines and firearms by the PDF groups.

The major was killed during an interrogation session by PDF-Federal Column on the previous day as he attempted to attack the PDF members.

After Tuesday’s shootout, all PDF fighters escaped from the ambush site without casualties, the Patee Talone PDF said. 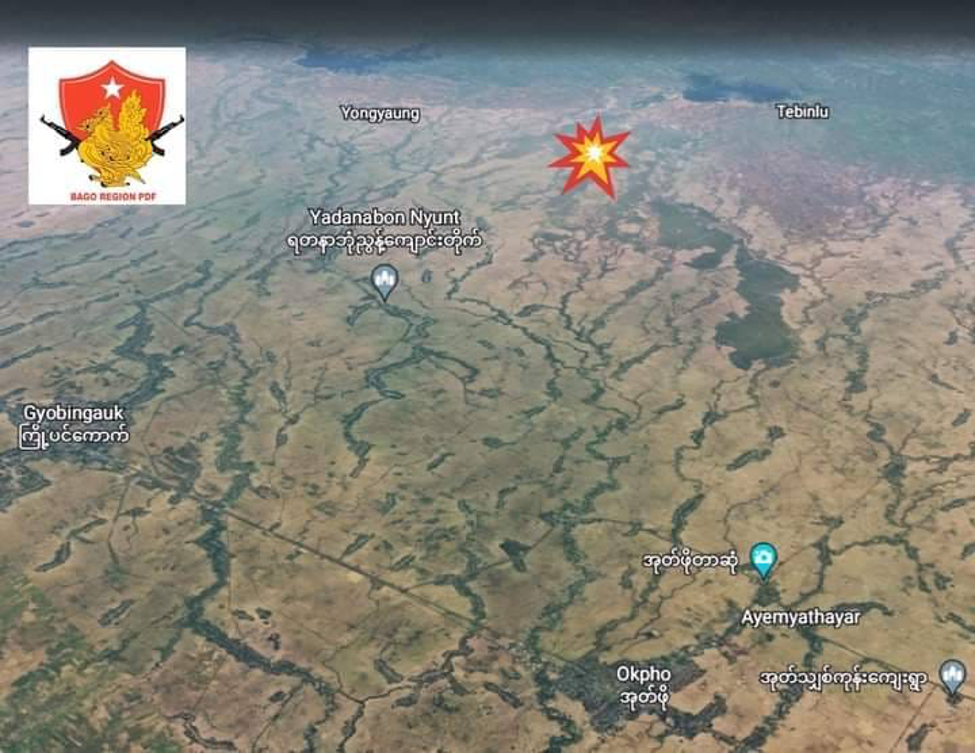 The location of a PDF bombing attack on regime forces in Oakpho Township on Wednesday. / Bago Region PDF

Many regime troops are believed to have been killed and injured in Oakpho Township, Bago Region on Wednesday when Tharyarwaddy PDF used remote-controlled bombs to attack regime forces stationed in a civilian house in Wine Village, said Bago Regional PDF. 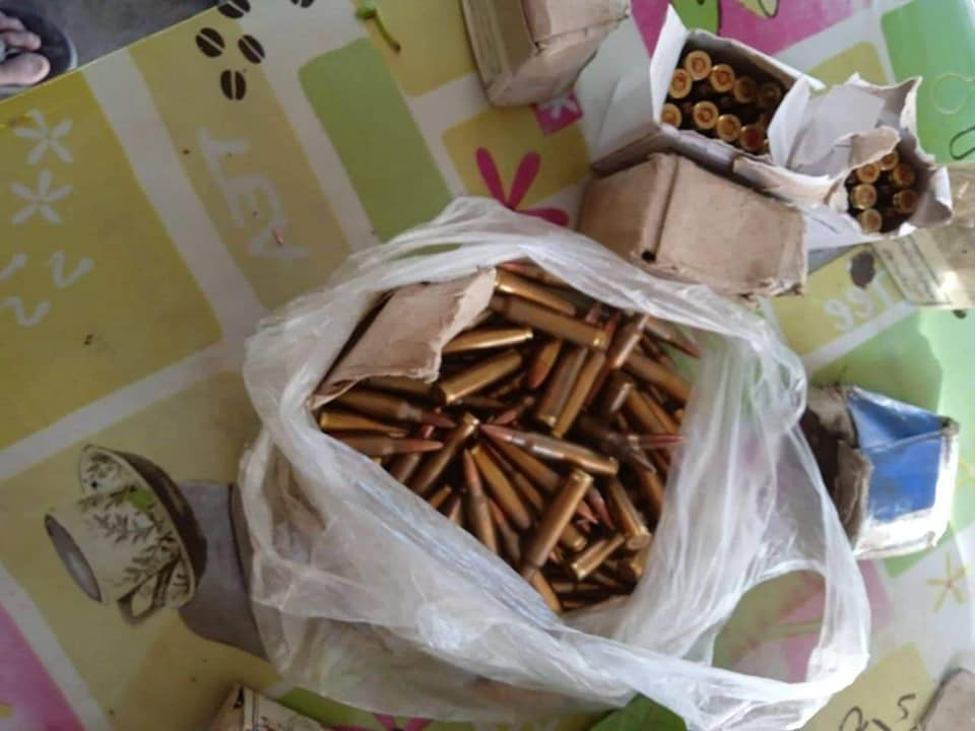 Ammunition seized by PDF groups from a junta logistics vehicle in Madaya Township on Wednesday.

A junta logistics vehicle carrying ammunition, military equipment and property looted from displaced civilians was seized by PDF groups in Madaya Township, Mandalay Region on Wednesday, according to media reports quoting the groups.

The groups told the media they confiscated the ammunition and burned the other military equipment.