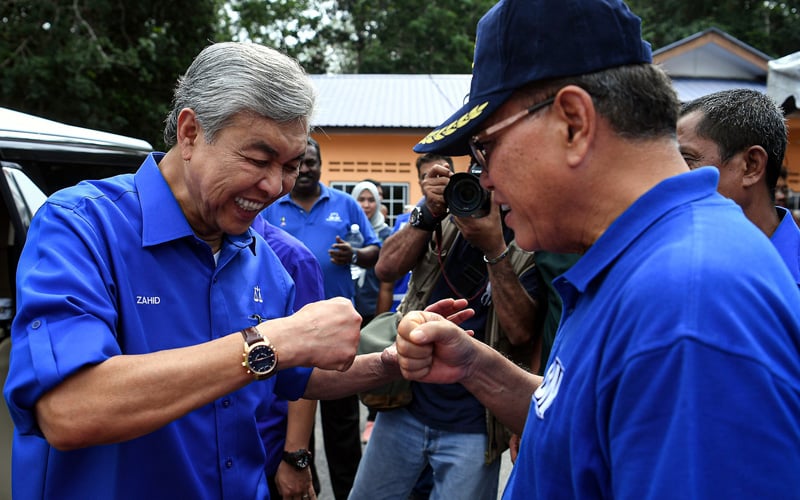 PEKAN: Six victories in by-elections, including for the Chini state seat last night, have proven that Barisan Nasional (BN) is still relevant and accepted by the people.

BN chairman and Umno president Ahmad Zahid Hamidi said this put paid to all the talk that the BN symbol was no longer accepted by the public.

“I am convinced that these six by-elections (after the 14th general election) are evidence that BN is not only still relevant but also has a bright future if the component parties and friends in Umno and Muafakat Nasional give their support to ensure success in the next general election.

“In addition, we are now part of Perikatan Nasional,” he told reporters after BN candidate Mohd Sharim Md Zain was declared the winner of the Chini by-election, adding that voters in Chini want “continuity of BN services”.

Before this, BN had won the by-elections in the parliamentary seats of Cameron Highlands. Tanjung Piai and Kimanis and the Semenyih and Rantau state seats.

Pekan MP and Umno division head Najib Razak said Muafakat Nasional was not complacent even though Sharim was competing against two independent candidates.

He said the support for BN and Muafakat Nasional had been “so strong that the two independent candidates lost their deposits”.

“I consider this a victory for the voters in Chini as they want a people’s representative who can serve them and continue development in the area,” he said.

One Barca player among those starting the pre-season has contracted a coronavirus
Malinovsky settled in Italy: after the quarantine, he scored against Lazio and Juve, ahead of Mertens, Higuain and De Ligt in the ranking of the best players in Serie A
City are ready to give Coulibaly a 5-year contract with a salary of 10 million euros. Napoli wants 80 million for him^. Manchester City are working on the transfer of defender Kalidou Coulibaly from Napoli
PSG have a lot of injuries before the Champions League (even Tuchel!). Kerer broke his ear, but Mbappe is recovering furiously
Manchester City can join the fight for Tiago. Liverpool are still Interested in the player
Fomin about career abroad: I don't plan so: in 20 — FNL, in 22 — RPL, in 24 — Europe. I move step by step
Mendes suggested Manchester United's Fati as an alternative to Sancho. Barcelona will not sell the midfielder and will extend his contract
Source https://www.freemalaysiatoday.com/category/nation/2020/07/05/6-by-election-victories-prove-bn-still-relevant-says-zahid/

Back from the dead? Stem cell option to revive Malaysia’s extinct rhinos

Apple must pay US$500m over patent violations, US court rules

Fifa, AFC postpone World Cup qualifiers to next year due to Covid-19

42 new Covid-19 infections in Singapore, including 11 imported cases and one in the community

Fired up by HK activists, Thailand’s youth take on the establishment

182 arrested under RMCO, including for karaoke activities

Bolsonaro denies Amazon rainforest is on fire despite govt data

Political environment muddied with so many coalitions — Jamari Mohtar

Ismail Sabri: 182 nabbed for RMCO violations including 17 for not wearing masks

‘We must fight’: Thailand’s youth take on the establishment