Florida infections rise by more than 10,000 for second time since Thursday 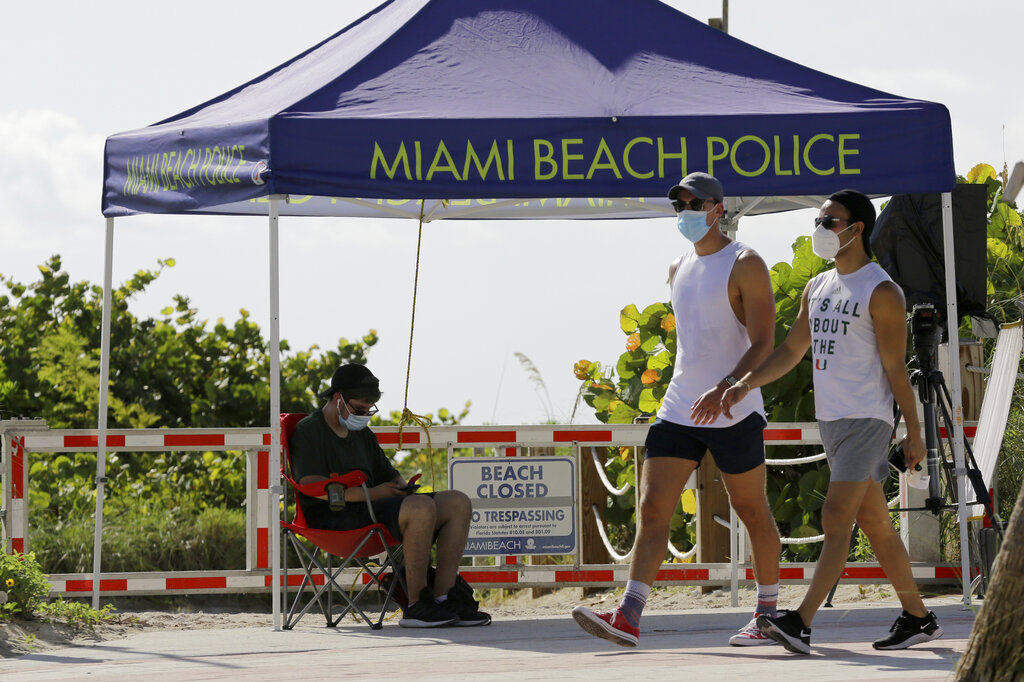 FLORIDA: Florida’s confirmed coronavirus cases rose by a record 11,458 on Saturday, the state’s health department said, the second time in three days that its caseload increased by more than 10,000.

The new record came a day after seven other states also reported record rises in cases of Covid-19, the disease caused by the coronavirus that has killed nearly 130,000 Americans.

The recent surge, most pronounced in southern and western states, has alarmed public health officials, who urged caution ahead of a July 4th holiday weekend to celebrate the Declaration of Independence of the US in 1776.

Florida’s record rise in cases was more than any European country’s daily peak at the height of the outbreak there.

Despite the jump in infections, the average daily death toll in the US has gradually declined in recent weeks, a reflection of the growing proportion of positive tests among younger, healthier people who are less prone to severe outcomes.

Evidence the surge is not simply due to expanded testing, the percentage of tests coming back positive in Florida rose to 14.8% in the past two weeks compared to 8.3% the two weeks prior, according to a Reuters analysis.

The World Health Organization says a rate over 5% is concerning.

Against that backdrop, Miami-Dade County Mayor Carlos Gimenez imposed an indefinite nightly curfew starting Friday and halted the reopenings of entertainment venues such as casinos and strip clubs.

Click here for our live update of the Covid-19 situation in Malaysia.

Borussia will offer Sancho a new contract if Manchester United do not agree to their terms by Monday
Giorgio Chiellini: Difficult seasons happen. We want to keep winning. Always
Messi is sleeping on an anti-virus mattress. What kind of fiction is this?
Solskjaer on the Europa League: Winning with Manchester United would be the biggest achievement of my career
Liverpool can buy defender Olympiakos Tsimikas for 13 million euros
Muller on the fact that Lewandowski is the best forward in the world: we will See on Friday. Messi also played well
Willian addressed the Chelsea fans: I leave with my head held high. I'll miss you
Source https://www.freemalaysiatoday.com/category/world/2020/07/04/florida-infections-rise-by-more-than-10000-for-second-time-since-thursday/

Over 100 undergo Covid-19 tests in Penang

Winning Europa League would be proudest moment as a manager, says Solskjaer

Myanmar to probe deaths of two teens at juvenile centre

Anwar calls for end to ethnic-based parties, up to youths to decide

US health chief arrives in Taiwan on trip condemned by China

Part of Sarawak’s century-old Fort Renee up in flames

Covid-19: Another school in Kuala Sanglang closed for two weeks

Shafie: Over 3,000 native land titles handed over to Sabahans this year

Call for business hours extension in Sarawak’s zone one

Over 3,000 native land titles handed over to Sabahans this year, says CM

Lebanese call for an uprising after protests rocked Beirut

Independents under Dr M’s bloc to be seated together

175 new Covid-19 infections in Singapore, including three imported cases and one in the community

Perak plans to expand community garden to all districts

All roads to and from Kampung Sanglang to be closed tomorrow

Abe to avoid visit to shrine on 75th war anniversary

Johnson and Koepka set for another PGA final showdown

New party Sabah Putra to opt out of state election