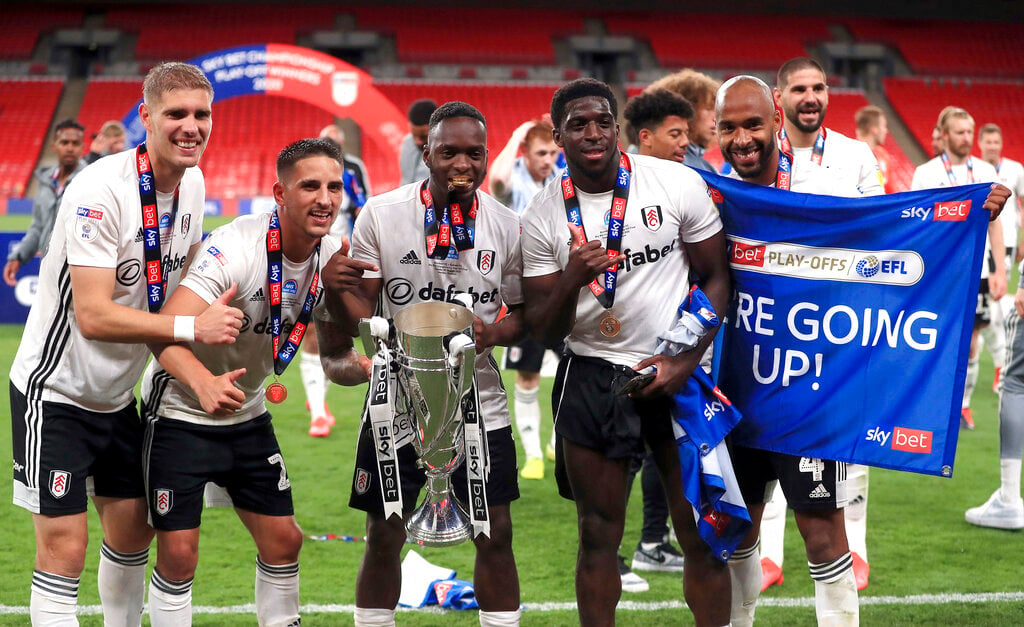 LONDON: Fulham beat Brentford 2-1 in the Championship play-off final at Wembley on Tuesday to earn an instant return to the Premier League thanks to two goals in extra time from defender Joe Bryan.

In a game considered the most valuable single match in world football, Bryan was the unlikely hero after the two London sides were locked at 0-0 at the end of 90 minutes.

Henrik Dalsgaard scored a late consolation for Brentford but it was too little too late for Thomas Frank’s side, who have not played in the English top flight for 73 years.

Leftback Bryan broke the deadlock for Fulham in the 105th minute when he caught Brentford goalkeeper David Raya off guard with a freekick from 35 yards out.

While Raya and everyone else expected a cross, Bryan curled the ball into the near post to break the deadlock.

He wrapped up the victory for Fulham with three minutes of extra time left when he grabbed his second of the night.

The leftback swapped passes with Aleksandar Mitrovic and stroked past Raya from inside the area to give Fulham boss Scott Parker the biggest win of his short managerial career.

Promotion was confirmed for Fulham, but only after Henrik Dalsgaard had pulled one back for Brentford in the 124th minute.

He headed home after Christian Norgaard had knocked a freekick across the face of goal.

The Craven Cottage club will earn around £135 million for bouncing back from relegation last season and this result also gives rookie boss Parker a first success of his fledgling managerial career.

“We’ve done what we’ve done tonight, but there’s still improvement, and that’s what makes me so proud and happy,” Parker told Sky Sports.

“For all of the good players and everything you see, what makes me so happy I see a group of players who only a year ago were struggling psychologically, didn’t have a mindset or mentality.

“I’ve driven this team every single day and what makes me proud is I stood on the touchline tonight and have seen a team that represents what I’ve been saying over the last 12 months.”

Brentford, who beat Fulham twice in the league this season, finished third in the Championship table, ahead of their London rivals on goal difference.

The result is a bitter blow for Brentford, who were on the brink of automatic promotion last month before successive defeats against lowly Stoke and Barnsley forced them to settle for a third-place finish behind Leeds and West Brom.

Flick on Bayern's Interest in Kramaric: I know him well, but I haven't heard anything about it
We have three clubs in this group stage of the Champions League. How did campaigns with two end up?
Solskjaer on transfers: No news. Working with what we have, Manchester United have a big squad
Guardiola confirmed that Zinchenko will stay at Manchester City
Bayern won 5 trophies in a year. To repeat the record Barca need to take another
Flick took 5 trophies with Bayern after 40 matches
Marcel: Alvaro Gonzalez is not a racist. Any accusations against him are unfair and unfounded
Source https://www.freemalaysiatoday.com/category/sports/2020/08/05/fulham-sink-brentford-in-play-off-final-to-make-premier-league-return/

Covid-19: New cluster identified in Kedah after death of man in emergency ward

Country singer-songwriter Mac Davis, who wrote ‘In the Ghetto,’ dies at 78

Geng 21 member wanted over attempted robbery and murder in JB

Messi’s happiness not in my hands, says Koeman

Bukit Aman: Dispute at workplace among motives for murder cases since 2009

US to detain FGV products over forced labour allegations

US Treasury’s Mnuchin ‘hopeful’ for coronavirus aid compromise with Democrats

EU slams Hungary and Poland in rule of law report

US airlines strap in for bailout suspense a day before furloughs

Mnuchin hopes US airlines will delay furloughs if deal in sight

Boris Johnson scolded for ‘contempt’ of parliament over Covid-19 rules

Baby boom at Taipei Zoo is cause for celebration

Macron on Russia dialogue bid: ‘it takes two to tango’

All-electric and hydrogen trucks to carry freight in the future

Ombudsmen Bill expected to be tabled in parliament before year-end, says GIACC D-G

US, Taiwan to team up on infrastructure in pushback against China