‘Gone before my eyes’: Bangladesh fireman’s unit decimated by blast 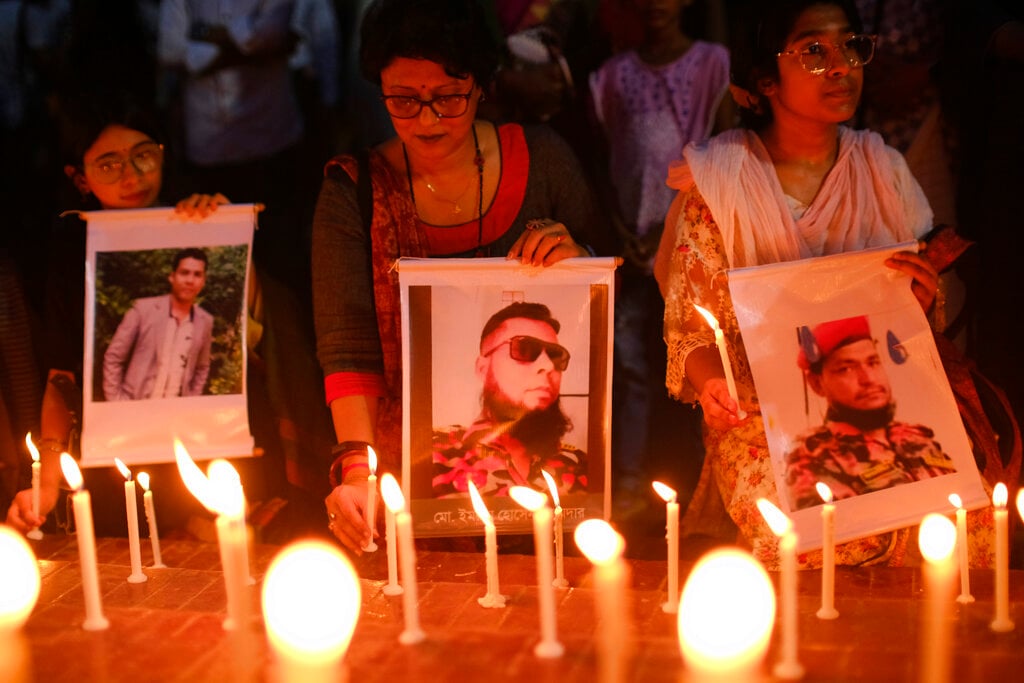 Candles being lit in memory of victims of the fire at the BM Inland Container Depot as they gather at Shahid Minar in Dhaka on June 6. (AP pic)

SITAKUNDA: Firefighter Rakibul Hasan Bappy’s engine was the first to arrive at a blazing Bangladeshi container depot. After a devastating explosion, everyone else in his 15-man crew is now either dead, missing or injured.

The 22-year-old — who joined the fire service three years ago — had been ordered to increase the water pressure moments before the monumental blast lit up the night sky for miles around.

He stepped away to the fire truck, only to be confronted when he returned by carnage and the bodies of friends and crewmates.

“I will never forget this till my death,” Bappy told AFP, trembling as he recalled the scene at the weekend’s disastrous blast.

“All those colleagues, gone in front of my eyes. We were energised to work, but when I saw them dead, I don’t know how to express it. I am not feeling right anymore.

Firefighters in Bangladesh are badly equipped and poorly paid — salaries start at US$200 a month — compared to some in private jobs, or army soldiers, who can be sent on lucrative UN peacekeeping missions.

But for rural families, a government job is one-way ticket out of poverty, bringing with it steady and regular pay hikes and pensions for the employee and their spouse.

Tens of thousands of people apply every year for the firefighter test and Bappy, the only child of a farming family in the rural northern district of Mymensingh, thought he was the “luckiest” man in his village when he got the job.

For my parents and me, it was the proudest moment,” he said. “I felt proud because I know I could serve the nation.”

Posted to Kumira, in Chittagong, he made friends with fellow new recruits Mohammad Rana Mia and Moniruzzaman. Both of them were killed at the weekend, their bodies ripped apart by the explosion.

“They are my best friends, and we were more than a family,” said Bappy.

“We worked so many nights together. They are also from the same background as I have. I know how devastating their deaths are to their poor families.”

Kumira is only 8km from the BM container depot in Sitakunda, where the blaze broke out late Saturday night.

Authorities have accused the facility operators of not telling firefighters volatile hydrogen peroxide was stored on site, and when they unwittingly doused it with water, the cache of chemicals detonated.

Five of Bappy’s crewmates have been confirmed dead, two are missing and feared dead, and the other seven are all critically injured, flown in military helicopters to Bangladesh’s best hospital for burn victims.

Local media said the Kumira firefighters did not have any training in chemical fires, which require sophisticated fire-fighting equipment — not available at their station — and careful handling.

“The depot did not tell us that there were chemicals close to the garment containers,” said Purnachandra Mutsuddi, a regional fire official.

Had they known, he added, “We would never send our firefighting team to splash water on the fire. Now our young brothers are dead.”

More than 40 people were killed in total, among them at least nine firefighters, making it the nationwide service’s worst-ever single disaster.

Bangladeshi infrastructure has long been poor but its economy is now booming, a combination that keeps firefighters busy with frequent blazes in factories and multi-storey buildings.

Bappy was still on duty at the station on Monday, where colleague Riad Hossain — part of a reinforcement crew for the blaze — recalled chatting to Rana immediately before he responded to the distress call and went to his death.

“I don’t believe they are now gone,” said Riad, breaking down in tears.