Ibrahimovic proves his mettle with treble against LAFC 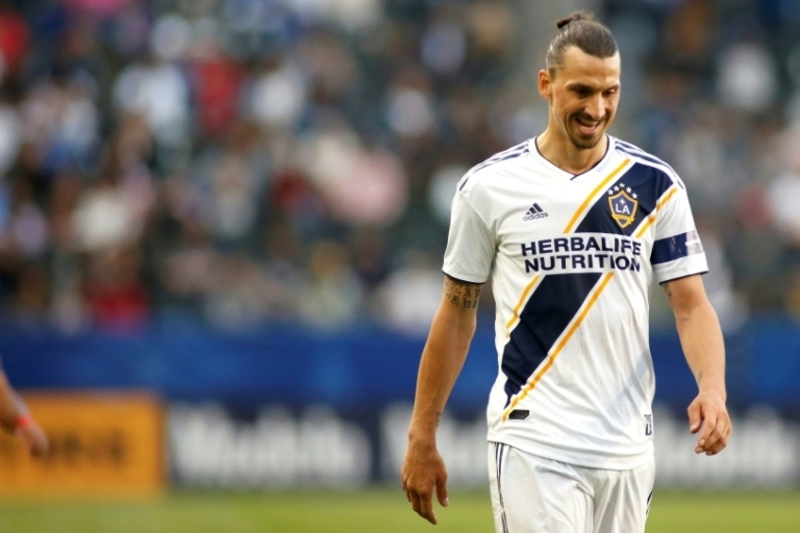 LOS ANGELES: Zlatan Ibrahimovic lived up to the bravado on Friday, scoring all three goals to power the LA Galaxy to a hard fought 3-2 victory over MLS rivals Los Angeles Football Club.

The unstoppable 37-year-old showed he’s still capable of astounding feats by dominating the smaller LAFC defence and scoring when it counted the most for his second career MLS hat trick.

“When you play against a rival like that, in a full stadium, I get pumped. I get adrenaline. This is considered to be the biggest game in the league and I show up in the biggest games,” said Ibrahimovic.

The big Swede, who has a flair for the dramatic since joining the MLS in 2018, boasted prior to Friday’s game that he is “by far” the best player in the league despite Carlos Vela’s superior stats.

The pre-game hype was about the marquee matchup between Galaxy’s Ibrahimovic and LAFC’s Vela. The duo scored all five goals, but it was the Swede who delivered in the key moments, scoring in the eighth, 56th and 70th minutes.

The Galaxy depend almost entirely on Ibrahimovic for offence and he thanked them with another hat trick performance against the top ranked team in the league.

“I am in playoff mode every day,” said Ibrahimovic.

Vela scored his league leading 20th and 21st goals in fourth and 97th minutes for LAFC, who were hoping to stake their claim to North American football supremacy with a win on Friday.

Vela now has five more goals on the season than Ibrahimovic who is in second place.

Vela opened the scoring with his 20th goal of the season by converting a penalty kick into the bottom left corner. Vela took a pass down the wing and Galaxy goalkeeper David Bingham came charging out of his net to trip him up.

Ibrahimovic tied it up four minutes later with a spectacular right-foot shot from outside the box to the bottom right corner at Dignity Health Park in south central Los Angeles.

While in full flight, Ibrahimovic took a high pass from Julian Araujo off his chest to his right foot. He volleyed it over the head of two defenders and let it bounce once on the turf before blasting it home from long range.

He scored in the 56th minute from a header to give the Galaxy their first lead of the game. Ibrahimovic outleaped LAFC defender Jordan Harvey and lofted the ball from the right side of the box to the high centre of the goal and out of the reach of goalkeeper Tyler Miller.

LAFC, who are on pace to break MLS records for points and goals scored this season, were controlling the offence around the hour point but all it took was one chance for Ibrahimovic to pad the Galaxy’s lead.

Ibrahimovic blasted a left footed shot from outside the box to the right corner in the 70th minute to bring the Galaxy to 3-1. It was his 520th career goal across all leagues.

Mexican international Vela rounded out the scoring in extra time by right footing a shot home but Ibrahimovic’s heroics had already taken the fire out of the LAFC offence.

Tempers flared in the hotly contested contest in the 73rd minute between LAFC’s Eddie Segura and the Galaxy’s Rolf Feltscher. After they came together, players from both teams joined in on the mainly pushing and yelling match.

There were a total of eight yellow cards handed out Friday with five going to the Galaxy.

Pep Guardiola: Sancho has decided to leave, why should he come back? He didn't want to be in the city
Arteta on the absence Gendusa in the application: Some things should change, but they don't
Klopp on the championship corridor from city: I don't need it. We don't celebrate events from a week ago
Inter will announce the transfer of Hakimi after the end of the season
Zidane on Hames' words about Real Madrid: I understand him. He wants to play more, which is normal
The environment of Grisman outraged by the behavior of leopards. They believe that Messi can change the situation
CEO akhmata about Glushakov: We are happy with it. We will discuss the future at the end of the season
Source https://www.freemalaysiatoday.com/category/sports/2019/07/20/ibrahimovic-proves-his-mettle-with-treble-against-lafc/

Ariff should stay, says PH on move to replace speaker

Malaysiakini fails to set aside AG’s bid for contempt proceedings

Help pours in for Malaysian singer To'ki, wife after they were found living in a hut near forest

Pakatan says Ariff proven as Speaker, should not be replaced

At least 50 dead in landslide at Myanmar jade mine, say officials

TNB: Domestic customers will get BPE details in their July bill

Over 7.5 tonnes of cocaine seized near Panama in joint Colombia-US operation

‘Nothing I can do but laugh’: Actor and businessman Boy Iman declared bankrupt by High Court

BSH recipients allowed to claim up to RM1,000 in funeral expenses

US sets new single-day record with more than 52,000 virus cases

'Happy to be here': Tourists relieved to start Corfu vacation

Al-Qaeda maintains Taliban ties, has ‘enduring interest’ in attacking US

Number of Sabah flood victims remains at 36 as at 8am

Ex-adviser rues absence of Sabahan in new MACC board

Ringgit opens lower due to pause in oil’s rally

Leishman: Lying to my wife, and the hope that drove me toward it

Ringgit opens lower against US dollar as oil rally pauses

US seizes US$800,000 worth of Chinese products made from human hair

NY cuts US$1 bil from police budget amid ‘defund’ calls

US dollar on defensive as upbeat data dulls safe-haven appeal

With more infections than ever, California rolls back reopening efforts

'I have no idea when I will go back to work', says actor Tom Hanks