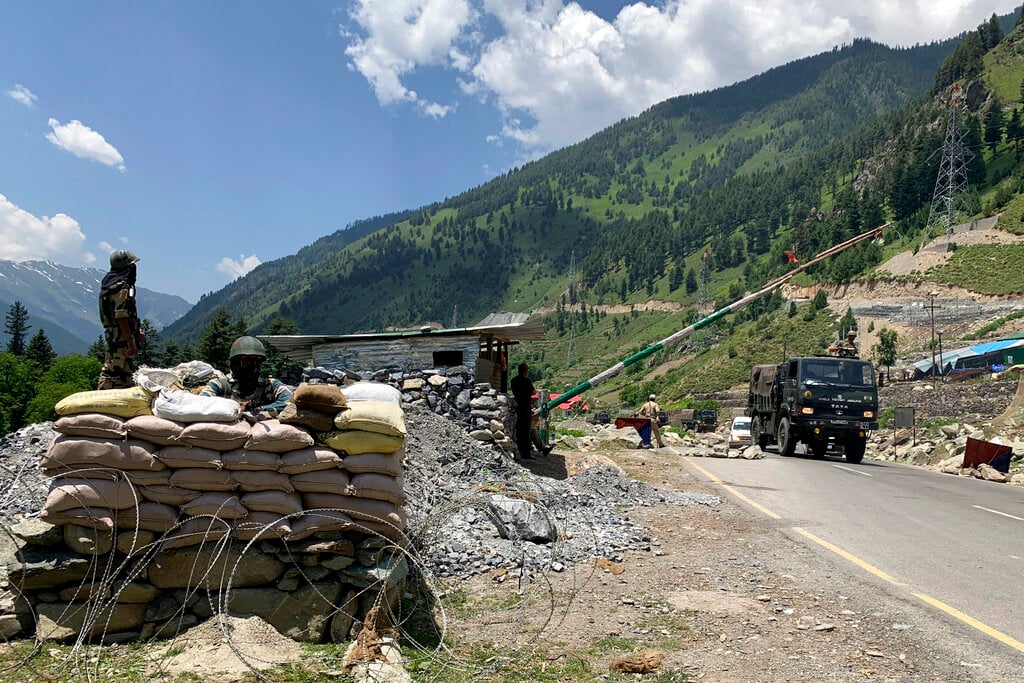 Soldiers keep guard as an Indian army convoy moves along the Srinagar-Ladakh Highway in India in June. (AP pic)

The first five planes of a US$9.4 billion order for 36 Rafale aircraft were formally commissioned on Sept 10, with Defence Minister Rajnath Singh calling them a “strong message” to New Delhi’s adversaries.

“Rafale fighter jets have been familiarising in our operational areas including Ladakh,” a senior air force official told AFP on condition of anonymity.

In mid-June, Chinese and Indian soldiers engaged in violent hand-to-hand fighting in the Ladakh region that left 20 Indian troops dead.

China has also acknowledged suffering casualties but has not revealed any figures.

In another incident in early September, shots were fired for the first time in 45 years on the border with China.

The announcement of the Rafale flights came as military commanders from both sides held their latest round of talks aimed at easing tensions along the disputed Himalayan border.

It was not revealed when the flights commenced, but an AFP photographer saw a Rafale jet fly over Ladakh’s capital Leh on Monday.

The defence ministry had said during the commissioning that the fighter planes had “already flown and familiarised with our operational environment” without specifically mentioning Ladakh.

“(The Rafales) have undergone intense integrated training with other combat fleets including firing of advanced weapons,” that statement added.

India acknowledges it is behind China and other key nations in military firepower, and the purchase of the Rafale jets is one of many made in a bid to bolster its 1.4 million-strong army.

Zinedine Zidane: Real Madrid will try to win the Champions League. We know who we are and what we want
Ronald Koeman: Van Dijk is one of the best defenders in the world, but he was lazy, he had to work on his character
New version of the Champions League reform: the number of teams will be increased to 36, and there may be no groups at all
Di Maria didn't want to go to Manchester United, but he moved for a fat contract - and didn't fall into van Gaal's philosophy at all. The coach and the robbery broke it
UEFA will reduce payments to clubs in the Champions League and Europa League for 5 years due to losses from the pandemic
Cherchesov's son had a successful operation after breaking his jaw. Recovery period - 4 weeks
Alberto Zaccheroni: Ibrahimovic had a greater impact on Italian football than Cristiano Ronaldo
Source https://www.freemalaysiatoday.com/category/world/2020/09/22/india-sends-new-fighter-jets-on-familiarisation-flights-near-china-border/