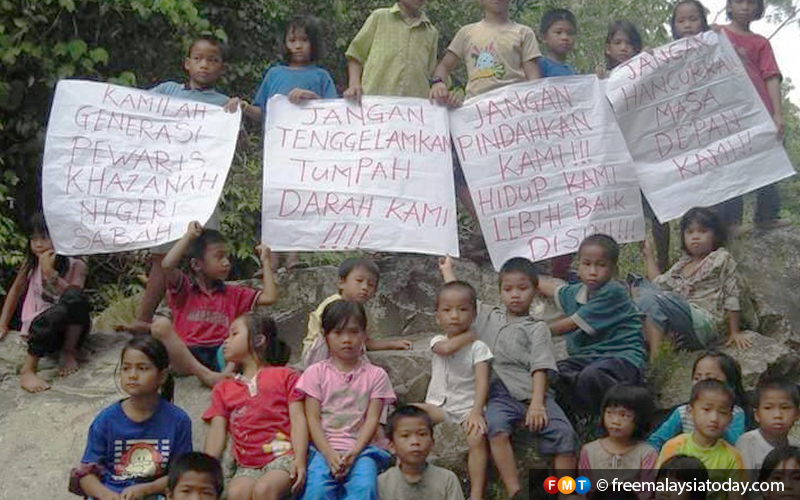 Schoolchildren protest against the construction of the RM3 billion Papar Dam project, that will submerge nine villages, including two schools.

KOTA KINABALU: Villagers in Penampang, which will be displaced if the Papar Dam is built, are suspicious of strangers coming into the area because it could mean the project is being accelerated.

“We found the seven, including a woman, had entered the villages without informing the village chief,” she told FMT.

Sipail said one of them, who introduced himself as David from Penampang, told her they were looking for durians and admitted that they had gone into the Mondoringin area – the proposed site of the Papar Dam – the day before.

She said she learnt that three of the “intruders” were from China, three were Sabahans and the woman was from the peninsula.

“I was suspicious because I had been told earlier by villagers in Kampung Terian, when they were there, that their purpose was to survey the road for the Borneo Safari route. 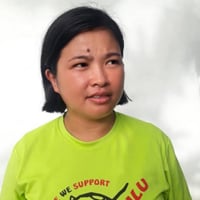 Diana Sipail says the villagers want the state government to address their concerns over the construction of the Papar Dam project.

“They had said they were part of the Discovery team although they did not explain what that meant,” she said. “Now, they are saying a different thing.”

Sipail said she spotted a drone in one of the vehicles.

She said the group failed to produce any authorisation letter or identification cards and was told to leave.

“We are anxious because we oppose the government’s plan to build the Papar Dam.

“The news of Chinese nationals entering our villages uninvited and unannounced have been unsettling for the villagers.

“We hope the police will take action. We have lodged a police report because we want these people investigated.

“We don’t believe they had gone to the kampungs to look for durians or to survey a route for the Borneo Safari. They should not pretend to be tourists,” she said.

Sipail said there had been rumours that the state government was looking to engage foreign companies, particularly from China, to build the dam.

She recalled that villagers had set up barricades to stop people from conducting earth tests or community surveys when the previous government wanted to build the Kaiduan Dam.

That project has been scrapped but in its place, the Papar Dam will be built on the same river and not far from the original site of the Kaiduan Dam.

Sipail said the villagers would not hesitate to take similar measures again if the government refused to address their concerns over the RM3 billion Papar Dam project.

Dembele returned to training on the basis of Barcelona. He hasn't played since November
Milan will buy out Kjaer for 3.5 million euros
22 thousand tests before each match – so Union wants to return a full stadium. One game will cost more than a million euros
Real asked fans not to gather in Madrid to celebrate the championship
Ronaldo will not leave Juventus. He wants to overtake Immobile and Lewandowski on goals and win trophies
Napoli will pay about 81 million euros for Osimhen. Medical check-up is scheduled for Thursday
Jose Mourinho: Financial fair play is dead. It is better to open the doors to the circus, let everyone have fun
Source https://www.freemalaysiatoday.com/category/nation/2019/07/20/intruders-worry-villagers-amid-row-over-papar-dam-project/

Baby gets infected with Covid-19 in the womb

Anifah warns against issuing 1MM13 to all groups of Sabah migrants

4 things to check before driving off on your vacation

More than just nasi lemak and the tarik — Ken Soong

US carries out first federal execution in 17 years

US banks set aside billions for bad loans

Smaller voter turnout at Chini by-election not a cause of worry for Muafakat Nasional, say analysts

Filipino welder dies as ground caves in during landslide in Bintulu

Economists: Singapore’s economic slump may have bottomed out but job losses, wage cuts likely to continue

Dr Mahathir: Party hopping is fine but what befell Pakatan is ‘intolerable’

Teenage boy dies of plague in Mongolia after eating rodent

Dr Mahathir: Muhyiddin removed Speaker over my no-confidence motion against him

138 schools in Sarawak will not reopen tomorrow over virus fears

So you think you know about black market trade? Here are some myths, debunked

Delta CEO says air travel ‘at a stall’ amid resurgent Covid-19, recovery over two years away

Strange nomination of Azhar not put to the vote, says Dr M