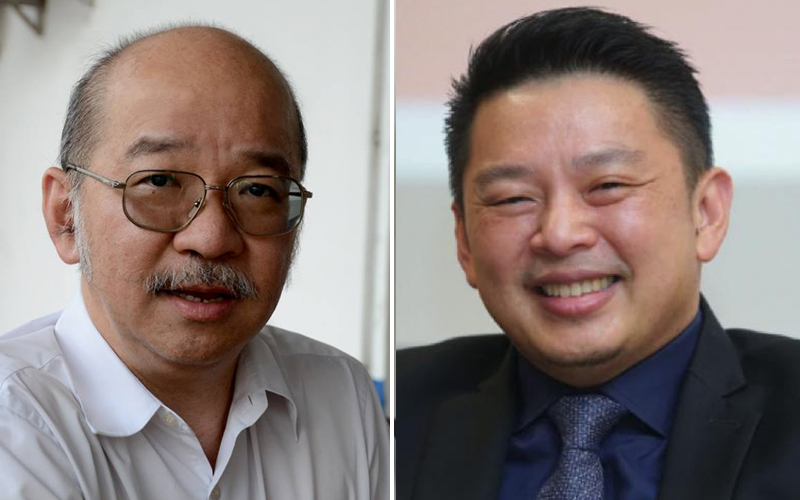 Yong Teck Lee (left) says Darell Leiking should own up to the failings of the Warisan-led Sabah government.

PETALING JAYA: A former Sabah chief minister says Darell Leiking should stop blaming others and admit that Warisan’s weak administration had led to the state’s worst economic performance since taking control in 2018.

Yong Teck Lee said the plunge in Sabah’s gross domestic product (GDP) growth to 1.5 % in 2018 was not only due to the decline in commodity prices.

He said “drastic policy changes” had damaged business confidence, and accused the Warisan-led government of sending the wrong signal to investors by tampering with legal agreements and ongoing businesses.

This had exposed the Sabah government to damages amounting to billions of ringgit, he said.

Yong said Sabah had recorded the highest economic growth in Malaysia in 2017, surpassing even the national average, which was at 5.9 %.

However, at the end of 2018, many retail outlets had closed down and unemployment increased.

“Datuk Darell Leiking should stop the blame game and instead admit that it is the Warisan-led government’s weak policies and lack of direction that led to Sabah’s worst ever economic performance since they took over the state’s administration,” he said in a statement.

Yong, who served as chief minister from 1996 to 1998, said the Federation of Malaysia Manufacturers (FMM) Sabah also reported a drastic drop of 25% to 50% in the state’s revenue.

He said Leiking should take note of such reports from the business community.

The SAPP president said the state government and the previous Pakatan Harapan administration could have mitigated the problems through the 2019 national and state Budgets, but failed to do so.

“The lame excuses had always been ‘the government has no money’, which we all know by now is simply not true.

“The Sabah treasury showed that there was a reserve of RM4 billion in 2018. Where has this RM4 billion gone?”

Leiking recently dismissed former prime minister Najib Razak’s criticism of the party’s ability to develop Sabah, saying Warisan was only in power for 26 months and it was too short a period to make any judgment.

Zhota about the 1st goal for Liverpool: an Incredible feeling. It's a pity the stadium wasn't full
Mikel Arteta: Liverpool is the standard that Arsenal must achieve. They are superior to us in many aspects
Leicester lead the Premier League after three rounds. Liverpool and Everton also scored 9 points
Jurgen Klopp: Roy Keane said Liverpool showed sloppy football? I want to hear it. Incredible game description
Manchester City refused to buy Coulibaly after the transfer of Dias
Conte wants to sign Inter Gervinho from Parma
Robertson and Trent contributed 33 goals in the Premier League in 3 years - the best result among defenders
Source https://www.freemalaysiatoday.com/category/nation/2020/08/04/stop-blaming-others-admit-your-weaknesses-yong-tells-warisan/

Liverpool come from behind to maintain 100% win record

New cluster detected in Selangor, linked to cases with travel history to Sabah

Annuar Musa: 'Adorable' of Wan Azizah to love her husband so much she only remembers his name

M'sians can now donate to Aman Palestin via QR code

Trump says he paid millions in taxes, plays down concerns about debt

US stocks gain ahead of economic data deluge

Muhyiddin thanks GRS partners for nominating Hajiji as CM, describes consensus as proof that cooperation among parties have people’s support

Only 3 hours to go through Covid-19 screening at KLIA

MySejahtera says why mall cases were not on Hotspot Tracker

Covid-19 screening at KLIA under control

Perak MB in quarantine although Covid-19 test is negative

US Open champion Thiem into Roland Garros second round

Kyrgios tells Wilander ‘to shut up’ over Murray blast

New fleet of 40 trains for Singapore North-South, East-West lines from 2024

Perak MB under Covid-19 home quarantine after returning from Sabah

‘Flying security guard’ can now watch over your house

Japan government warns on suicide after death of actress

15 new Covid-19 infections in Singapore, including six imported cases and two in the community