Time for Anwar to ask himself why he isn’t PM yet, says ex-AG 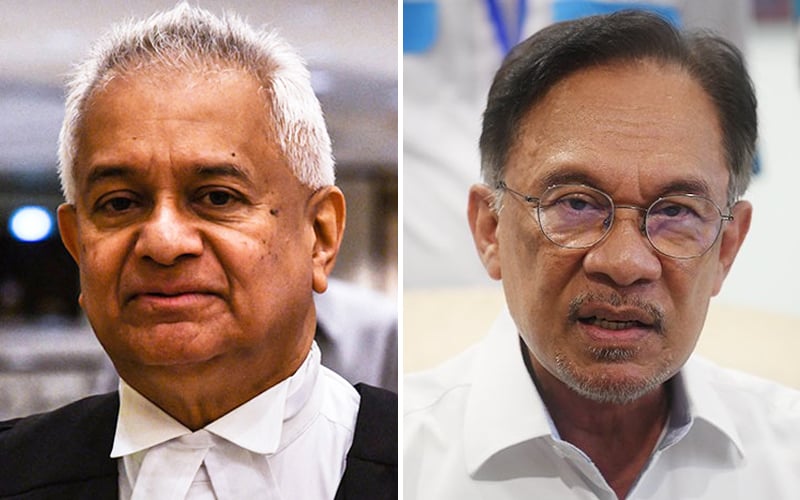 Tommy Thomas wonders whether Anwar Ibrahim has the numbers to be the prime minister.

PETALING JAYA: Anwar Ibrahim should look in the mirror and ask himself why he has yet to become a prime minister, a former attorney-general said.

He said Anwar thought he was going to succeed Dr Mahathir Mohamad, only to be sacked as deputy prime minister in 1998 before being charged and imprisoned for sodomy and corruption.

Thomas said the Port Dickson MP was imprisoned as “Mahathir in particular felt threatened by him and used the courts to stop him”.

“It was sad for him that he served time in jail, so one feels sorry for (him).

“But that does not mean that 24 years later – we are now in 2022 – he has the automatic right to become the prime minister. You don’t, the voters may not agree,” the Chinese daily quoted him as saying.

Thomas said there has to be a degree of self-reflection by Anwar.

“He has to look in the mirror and ask the question, ‘Why is this always passing me by?’”

He also said the question was whether Anwar had commanded the majority.

“And the next question is why doesn’t he have enough numbers?”

In April, Anwar insisted that he had the backing of most MPs in 2020, which would have made him prime minister. He told Malaysiakini he still had the support letters from party chiefs.

His bid to become the next prime minister, however, was scuttled by those who could not agree on “certain conditions”.

In September 2020, Anwar had claimed he had a “strong, convincing, formidable majority” to form a new government and declared the collapse of Muhyiddin Yassin’s government.

Recently, an analyst claimed that Anwar was going to form a new government with an Umno faction. Political leaders have since dismissed the notion.