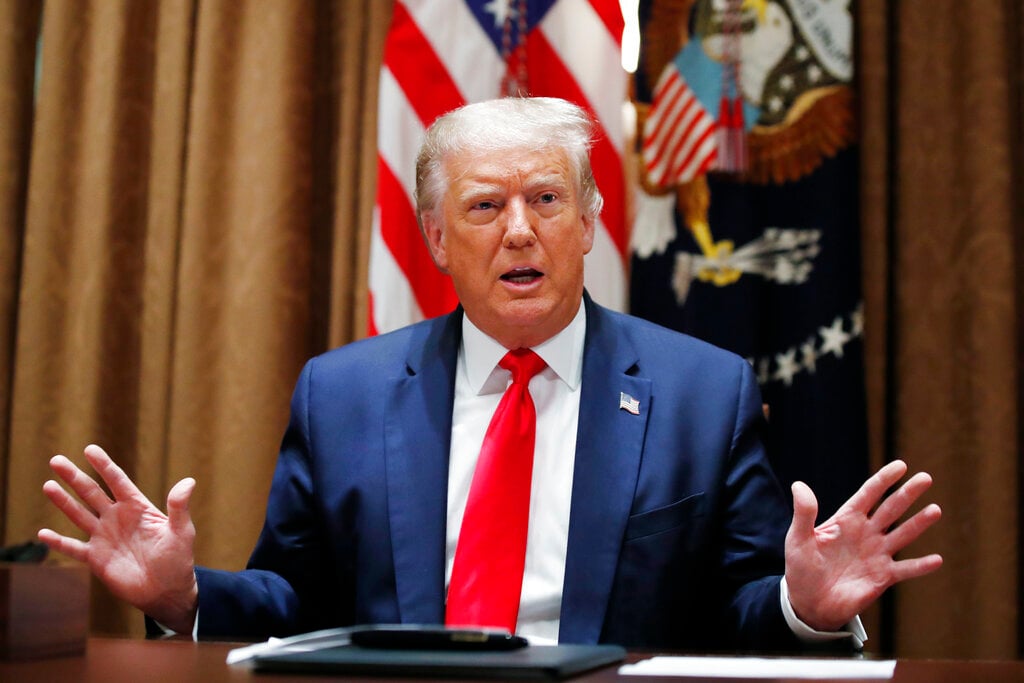 President Donald Trump speaks during a meeting with US tech workers in the Cabinet Room of the White House yesterday.(AP pic)

WASHINGTON: US President Donald Trump said he doesn’t know how history will remember civil rights activist John Lewis, but that “he chose not to come to my inauguration,” in an interview with US media.

A longtime Democratic congressman, Lewis died on July 17, then received rare honors in Washington and was praised by key figures of both major parties for his life-long fight for equality.

“How do you think history will remember John Lewis?” Jonathan Swan of the Axios media outlet asked Trump in the interview aired on Monday.

“I don’t know John Lewis, he chose not to come to my inauguration.”

Lewis clashed with Trump on multiple occasions — as well as boycotting his swearing-in ceremony, Lewis cited Russian interference in the 2016 election to question his legitimacy and warned US democracy was under threat.

In the interview, which was recorded last week, Swan rephrased the question: “Do you find him impressive?”

Trump said in the interview that “no one has done more for black Americans than I have.”

Swan asked again: “Taking your relationship with him out of it, do you find his story impressive, what he’s done for this country?

“He was a person that devoted a lot of energy and a lot of heart to civil rights, but there were many others also,” Trump said.

Jurgen Klopp: Roy Keane said Liverpool showed sloppy football? I want to hear it. Incredible game description
Manchester City refused to buy Coulibaly after the transfer of Dias
Conte wants to sign Inter Gervinho from Parma
Robertson and Trent contributed 33 goals in the Premier League in 3 years - the best result among defenders
In Genoa, 14 cases of coronavirus after the match with Napoli. Neapolitans play Juve on October 4
In the Premier League had identified 10 new cases of coronavirus. Players and staff isolated
Mane scored for Arsenal. Sadio has 3 goals in 3 Premier League games
Source https://www.freemalaysiatoday.com/category/world/2020/08/04/trump-avoids-praising-deceased-civil-rights-hero-john-lewis/

New cluster detected in Selangor, linked to cases with travel history to Sabah

Annuar Musa: 'Adorable' of Wan Azizah to love her husband so much she only remembers his name

M'sians can now donate to Aman Palestin via QR code

Trump says he paid millions in taxes, plays down concerns about debt

US stocks gain ahead of economic data deluge

Muhyiddin thanks GRS partners for nominating Hajiji as CM, describes consensus as proof that cooperation among parties have people’s support

Only 3 hours to go through Covid-19 screening at KLIA

MySejahtera says why mall cases were not on Hotspot Tracker

Covid-19 screening at KLIA under control

Perak MB in quarantine although Covid-19 test is negative

US Open champion Thiem into Roland Garros second round

Kyrgios tells Wilander ‘to shut up’ over Murray blast

New fleet of 40 trains for Singapore North-South, East-West lines from 2024

Perak MB under Covid-19 home quarantine after returning from Sabah

‘Flying security guard’ can now watch over your house

Japan government warns on suicide after death of actress

15 new Covid-19 infections in Singapore, including six imported cases and two in the community

Malaysia wins PATA Gold Award in ‘Tourism For All’ category