UK PM ‘in denial’ as he faces MPs after confidence vote 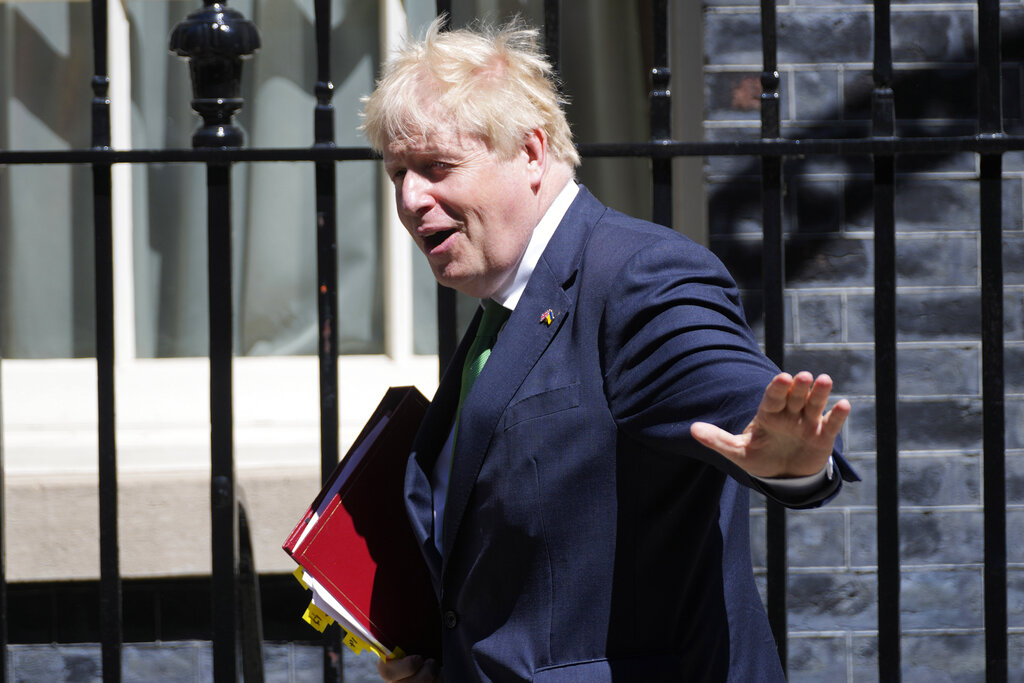 LONDON: Britain’s prime minister e fought Wednesday to get back on the policy front foot, but was likened to a “Monty Python” character who refuses to admit he is mortally wounded.

The Conservative leader was facing parliament for the first time since surviving a no-confidence vote of his MPs on Monday, which commentators said had left his scandal-tainted premiership still in peril.

Backers in the House of Commons staged a noisy show of support as he embarked on the weekly session of prime minister’s Questions. But Tory rebels sitting behind looked glum and laughed along with opposition jibes.

Johnson has branded the 211-148 confidence vote “decisive” and insisted it is time to “draw a line” under calls for him to resign over the “Partygate” scandal, about lockdown-breaching parties in Downing Street.

“As for jobs, I’m going to get on with mine,” he reiterated in the Commons, after defending his government’s record on employment, health and Ukraine.

“I’ve of course picked up political opponents all over and that is because this government has done some very big and very remarkable things which they didn’t necessarily approve of.”

But Johnson faced repeated taunts about Monday’s vote, including comparisons to Monty Python’s “Black Knight” character, who declares “it’s just a flesh wound” when he has his arms and legs chopped off in a duel.

“No amount of delusion and denial will save the prime minister from the truth: this story won’t go away until he goes away,” said the Scottish National Party’s Westminster leader Ian Blackford.

Johnson’s Tory opponents fear that public disgust over Partygate is crippling their party’s electoral chances. Some want a return to “Conservative values” including lower taxes after the Covid pandemic.

Downing Street set the stage for a policy blitz in the coming days, including on Britain’s skewed property market, where sky-high prices have deprived younger people of the hope of home ownership.

Rising rental prices are compounding the misery of the worst cost-of-living crisis in generations, which Johnson and his finance minister Rishi Sunak are set to address anew as well.

Tax cuts will come “as soon as it is fiscally responsible to do so”, Johnson’s press secretary told reporters, while ruling out any revamp of his cabinet team to bring in new blood.

The Organisation for Economic Co-operation and Development (OECD) warned Wednesday that Britain must cut taxes or raise spending as it forecast the country would have the weakest economic growth in the developed world next year.

“And I know that this is something the government is taking very seriously.”

But in the meantime, political commentators argue the size of the revolt constitutes a full-scale crisis for Johnson.

“I think there’s very little doubt that the vulnerability of the prime minister is going to be the single greatest factor shaping what this government does for the foreseeable future,” King’s College London politics professor Anand Menon told AFP.

The Conservatives are braced for two parliamentary by-elections this month and an upcoming investigation by MPs into whether Johnson lied to parliament over Partygate.

“Johnson achieved a remarkable election victory in 2019. But he has let things slide since then,” former cabinet member David Davis, who voted against him Monday, wrote in The Times.

“His victory in (Monday’s) vote provides his last chance to get his act together.”

Under current Tory rules, Johnson cannot be challenged again for a year, which leaves little time for any new leader to emerge before the next general election due by 2024.

However, Johnson’s enemies on his own side still appear to be manoeuvring, with reports he faces a “war of attrition” and “vote strikes” to paralyse the government’s legislative agenda.

Such “vote strikes” hurt Theresa May’s three-year stint in Downing Street, before she was brought down in 2019 by Johnson and his allies over how to execute Britain’s Brexit departure from the EU.