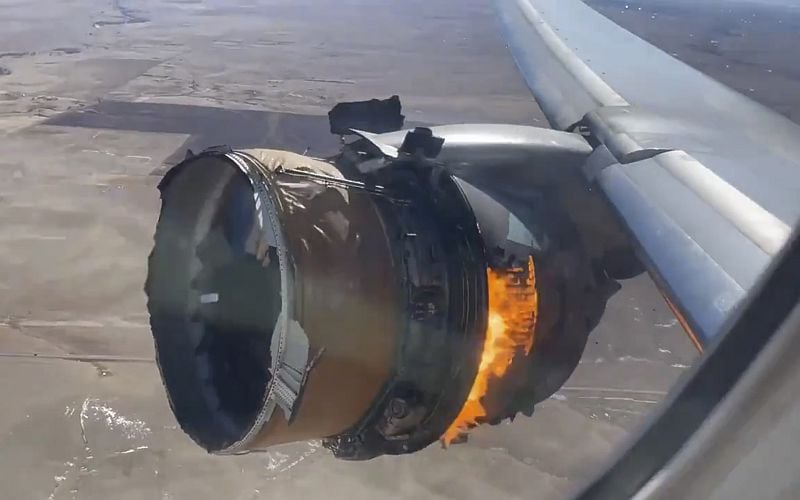 The engine of a United Airlines plane is on fire shortly after takeoff from Denver International Airport last week. (AP pic)

NEW YORK: Authorities have been working “non-stop” after a spectacular engine failure on a US flight that led to dozens of Boeing 777 aircraft being grounded worldwide, the chief air regulator said Tuesday.

The fault caused the United Airlines plane bound for Honolulu on Saturday to scatter debris over suburban Denver, although no one was hurt in the air or on the ground.

“We want to understand what happened and take the necessary steps to prevent a similar recurrence from happening,” Federal Aviation Administration head Steve Dickson said at an air safety town hall meeting.

“We’re fortunate there were no fatalities or injuries,” added Dickson, who reiterated that the agency was developing new airworthiness regulations to require stepped-up inspections.

The comments came after investigators pointed to metal fatigue as the chief suspect in the incident – a fresh setback for Boeing, which only recently resumed deliveries of the long-grounded 737 MAX following two fatal crashes.

It also raises fresh questions about the FAA, which was roundly attacked for its oversight of Boeing in the certification of the 737 MAX, and about whether maintenance was adequate on the plane, aviation experts said.

Even prior to the Denver incident, US air safety regulators had been weighing stricter inspections on the jets and their Pratt & Whitney engines, US officials said Tuesday.

The FAA reviewed inspection records and maintenance history after a Japan Airlines fan blade incident on Dec 4 last year “to determine the cause of the fracture and was evaluating whether to adjust blade inspections”, an FAA spokesman said Tuesday.

The flight landed in Japan without injuries.

In a briefing Monday night, the National Transportation Safety Board said it was too soon to know if the issue in Denver was similar to those in the Japan Airlines flight, or the February 2018 incident, which involved another Boeing 777 and Pratt & Whitney engine.

He said two fan blades fractured on the No 2 engine on the Boeing 777-200 on Saturday. One of them was later found on a football field, while the other remained lodged in the engine.

“This is an example of an event where we learn something about the design 20 years after it goes into service, and then we immediately ground the fleet, figure out what’s going on and fix it.”

In the wake of the Denver incident, Boeing said all 128 of the 777s with Pratt & Whitney engines were grounded.

On Monday night, a Delta Air Lines flight on a Boeing 757 en route to Seattle from Atlanta was diverted to Salt Lake City “out of an abundance of caution following an indicator warning of a possible problem with one of its engines”, a Delta spokesman said.

“The flight landed safely without incident and taxied to the gate without assistance.”

The MAX began returning to commercial service in late 2020, with airline travel still depressed due to the coronavirus pandemic.

Boeing executives said last month they expected it would take about three years for activity to return to pre-pandemic levels.

Michel Merluzeau, an expert at consultancy AIR, agreed the latest problem did not appear to result from poor plane design.

“It’s not really a problem for Boeing,” he said. “It’s more an issue of maintenance – how United or Pratt & Whitney is maintaining engines that have been in use for a while.”

The episode “is an embarrassing headline, but as a practical issue, it will have no impact on Boeing”, said Scott Hamilton of Leeham News, an aviation news site.

Atletico controlled the first half of the derby thanks to Simeone's bold plan. Then the game opened up, and Casemiro's spurts saved Real Madrid
Laporta on Messi: Barcelona is a family. I hope this will help to ensure that the best player in history remains at the club
Manchester derby in a deserted city: fans instead of players meet their cars, Zinchenko gives an Interview in Russian, Sulscher breaks the series Pep
Laporta on being elected president of Barca: The club must once again be happy and economically sustainable
Liverpool have not won at Anfield in 8 consecutive league games for the first time since 1952
Pioli about Milan: We are proud that we have a young team, but we need stability
Laporta became president of Barcelona again. Under him, the club took 6 trophies in 2009

Nasa Mars scientists spur girls to ‘reach for the stars’

Worst is over, economy will strengthen this year, says Zafrul

Women get fired for being pregnant in 38 countries, says World Bank

UK and others agree to fast-track adapted Covid vaccines

Nearly 5,200 frontliners in Penang vaccinated against Covid-19 as at March 7, says Kon Yeow

Why go after those who signed up for amnesty plan? Lim asks LHDN

No link found between S. Korean deaths and virus vaccine

No point in numbers if you don’t champion women’s issues, says Azalina

Worst is behind us, Malaysia will emerge stronger by year-end, says finance minister

Rush to bitcoin? Not so fast, say keepers of corporate coffers

England’s children go back to school after virus lockdown

Oil soars above US$71 after key Saudi crude terminal attacked

Khairy: Those travelling in between Covid-19 vaccine doses still subject to mandatory quarantine

Guan Eng: DAP cooperation with Umno only when it is of necessary public interest

What it meant to win the Players Championship

US govt goes to Federal Court to defend sacking of guard

Bale over psychological scars of past injuries, says Mourinho

Khairy: Pfizer to supply 32m doses of Covid-19 vaccine by this year

DAP to lodge reports against PM, Cabinet for not allowing Parliament to sit

Women empowerment will continue to be a top national agenda for PN govt, says PM Muhyiddin