World leaders mark UN at 75, challenged by pandemic and US, China tensions 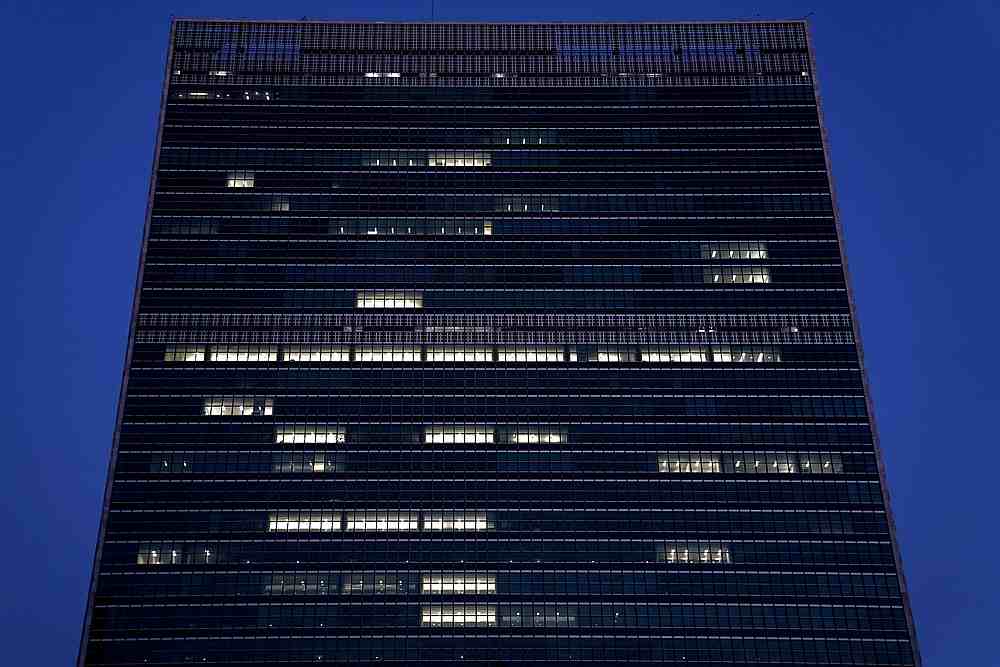 The United Nations building is pictured in the early evening with most of its lights out during the 75th annual UN General Assembly high level debate in New York September 21, 2020. — Reuters pic

NEW YORK, Sept 22 — World leaders came together, virtually, yesterday to mark the 75th anniversary of the United Nations, as the deadly coronavirus pandemic and tensions between the United States and China challenge the effectiveness and solidarity of the 193-member body.

As Covid-19 began to spread around the world earlier this year, forcing millions of people to shelter at home and devastating economies, countries turned inward and diplomats say the United Nations struggled to assert itself.

Long-simmering tensions between the United States and China hit the boiling point over the pandemic, spotlighting Beijing's bid for greater multilateral influence in a challenge to Washington's traditional leadership.

The coronavirus emerged in China late last year, and Washington accuses Beijing of a lack of transparency that it says worsened the outbreak. China denies the US assertions.

In an apparent swipe at the United States, China's president, Xi Jinping, said yesterday: “No country has the right to dominate global affairs, control the destiny of others, or keep advantages in development all to itself. Even less should one be allowed to do whatever it likes and be the hegemon, bully or boss of the world. Unilateralism is a dead end.”

Xi's remarks were not in the video he recorded for the meeting. They were included in a longer statement that the Chinese UN mission said was submitted to the world body.

China has portrayed itself as the chief cheerleader for multilateralism as President Donald Trump's disregard for international cooperation led to Washington's quitting global deals on climate and Iran and leaving the UN Human Rights Council and the World Health Organisation (WHO).

The deputy US ambassador to the United Nations, Cherith Norman Chalet, told the General Assembly that the world body had in many ways proven to be a “successful experiment,” but “there are also reasons for concern.”

“The United Nations has for too long been resistant to meaningful reform, too often lacking in transparency, and too vulnerable to the agenda of autocratic regimes and dictatorships,” she said.

The US withdrawal from the WHO came after Trump accused the agency of being a puppet of China, a claim the WHO denied.

Russian Foreign Minister Sergei Lavrov said “increasing discord” in the international community was sparked by some countries meddling in the domestic affairs of other states and imposing unilateral sanctions — a veiled dig at Washington.

“The world is tired of dividing lines, dividing states into them and us. The world requires increasing multilateral assistance and cooperation,” he said.

The pandemic has exposed the world's fragilities, UN Secretary-General Antonio Guterres said. “Today we have a surplus of multilateral challenges and a deficit of multilateral solutions,” he said.

The Security Council took months to back a call by Guterres for a global ceasefire — to allow countries to focus on fighting Covid-19 — due to bickering between China and the United States.

German Chancellor Angela Merkel said the interests of individual member states had “too often” forced the United Nations to lag behind its ideals.

“Those who believe that they can get along better alone are mistaken. Our wellbeing is something that we share — our suffering too. We are one world,” she told the General Assembly.

Several leaders called for a reform of the United Nations and in particular the 15-member Security Council, arguing it was unfair that the United States, Russia, China, France and Britain were the only permanent veto-wielding powers.

“A council structure that leaves the fate of more than 7 billion people to the mercy of five countries is neither fair nor sustainable,” Turkey's president, Tayyip Erdogan, said.

The one-day special event yesterday comes ahead of the annual meeting of world leaders at the United Nations, which starts today with no presidents or prime ministers physically present in New York. All statements have been pre-recorded and will be broadcast in the General Assembly hall.

The United Nations was created when countries came together after World War Two to prevent another such conflict. While there has not been a World War Three, leaders adopted a statement yesterday acknowledging “moments of disappointment.”

“All this calls for greater action, not less,” the statement said. — Reuters

Hans-Dieter flick: I Hope Alaba will sign a contract with Bayern. Our club is one of the best in the world
Diego Maradona: Messi gave Barca everything, brought them to the top. He was not treated the way he deserved
Federico Chiesa: I hope to leave my mark in Juve. We will achieve great results
The Coach Of Benfica: I don't want us to look like the current Barcelona, it has nothing
Guardiola on returning to Barca: I'm happy at Manchester City. I hope to stay here
Fabinho will not play with West ham due to injury
Ronald Koeman: Maradona was the best in his time. Now the best Messi
Source https://www.malaymail.com/news/world/2020/09/22/world-leaders-mark-un-at-75-challenged-by-pandemic-and-us-china-tensions/1905439

Another potential water disaster averted, this time from factory fire