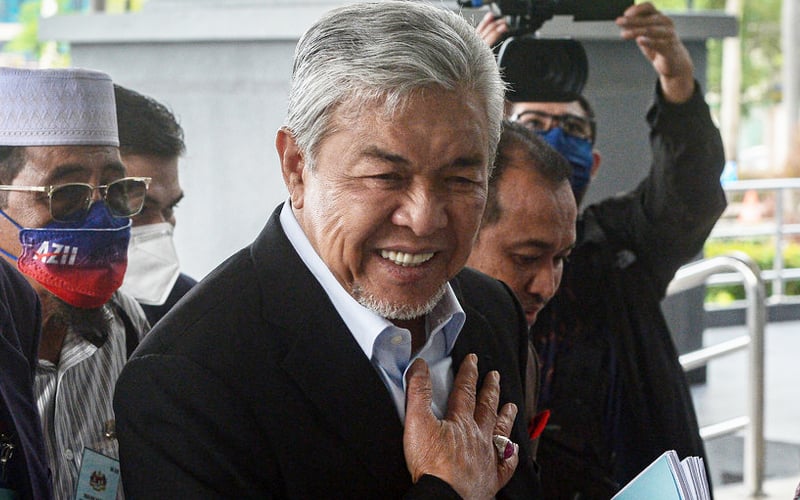 Ahmad Zahid Hamidi faces a total of 33 counts of bribery in connection with the One-Stop Centre in China and the foreign visa system. (Bernama pic)

The amendment involves a change of date of an alleged offence from April 2017 to March 27, 2018, one of the 33 counts of bribery to which he had claimed trial earlier.

Under the amended charge, Zahid is accused of obtaining RM3 million in gratification from Ultra Kirana Sdn Bhd (UKSB) while he was the home minister.

Bernama reported that Zahid pleaded not guilty to the amended charge before judge Yazid Mustafa.

He was alleged to have committed the offence at 389, Jalan Bayu Nyaman, Country Heights, Kajang, on March 27, 2018.

Zahid, 69, is facing 33 charges of receiving bribes amounting to S$13.56 million (RM42 million) from UKSB as an inducement for himself in his capacity as a civil servant and the then home minister to extend the contract of the company as the operator of the One-Stop Centre (OSC) in China and the foreign visa system, as well as to maintain an agreement to supply foreign visa system equipment to the same company by the home ministry.

On another seven counts, Zahid was charged as home minister to have obtained for himself S$1,150,000, RM3 million, €15,000 and US$15,000 in cash from the same company in connection with his official work.

He is charged with committing all the offences at Seri Satria, Presint 16, Putrajaya, and Country Heights, Kajang, between October 2014 and March 2018.