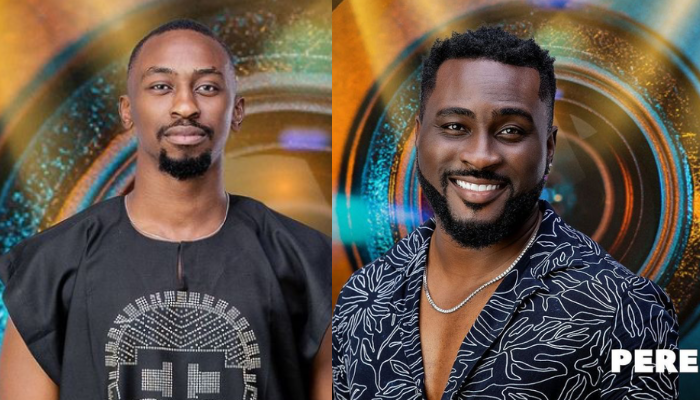 Big Brother Naija Shine Ya Eye housemates, Pere and Saga, got into a heated argument during the preparation for a group task.

The clash ensued on Tuesday, day 52 of the show, when Saga raised an opinion that was different from Pere’s own.

It was during the YouID task where Saga, Pere, Queen and Emmanuel were placed in Team Security, one of three groups for the task.

Saga wanted the group to work according to the brief but Pere said they should also add what was shown in the video.

“I’m saying we should inculcate inculcate everything,” Pere said.

Saga then told Pere to stop taking it personal and allow other group members to contribute too.

Pere retorted, “Why should I not bring the energy to win here? We have to play to win. What do you mean? I should not bring a positive energy here?”

Queen tried to calm the situation as she said, “You guys should stop this thing. It’s okay.”

She added, “Yeah, I play to win too. Let’s just try our best. Other people are already going far.”

Also trying to calm the situation, Emmanuel said, “I want us to win this thing.”

Arsenal demolished Tottenham for the first half of the derby. A hole in the support zone and a completely unprepared Kane helped
Kroos on the injury: I played with the pain for six months, taking pills. Between matches, the pain was much stronger
Damsgaard is Interesting for Juve, Inter, Milan and Tottenham. He scored against Russia and England at the Euro
Niko Kovac: This is exactly what I want to see-the substitutes come out and decide the outcome of the match
Spalletti on the leadership of Napoli: Expectations from us have increased, but there is something to add
Talalaev about 2:1 with Rostov: Akhmat's game needs to be improved. There were a lot of nerves at the end
Aroyan is the first Armenian to score in La Liga. The defender of Cadiz scored a goal in the game with Rayo

Tinubu had surgery, I visited him in London to show support –Fayemi

We’ve No Leadership In Nigeria: Lamido

2023 Presidency: Only God knows what the future holds for me, says Fayemi

BBNaija: I’d prefer to leave than play this game to get back in – Pere

Why I will not join controversies over 2023 Presidential zoning –Fashola

6 things to look for when buying testosterone boosters online

The human experience and online gaming.

EPL: Giroud reveals what he told Tuchel before leaving Chelsea for Milan

Imo oil wells: We will get justice in Supreme Court – Gov Uzodinma

Did sex education just usher in a new wave of Nigerian representation in UK television?

Why COVID-19 origins should be investigated globally -Lancet

COVID-19: Countries on green list to be exempted from testing -UK

Ballon D’Or 2021: Two winners to be announced this year

Gabon's President Bongo has made the Case for Inclusive Energy Transition

A Just Energy Transition as advocated by President Macky Sall, will benefit Senegal's economy, and create jobs for its young people

Original name of Africa and how it got its current name

Nigeria: In The Eyes Of The World-- Wobbles & Fumbles At 61 By Richard Odusanya

'My Village People' grosses over N100 million in box office

EPL: Tottenham manager explains why they lost 3-1 to Arsenal

Why I’ve been single since 2015 – Whitemoney

Ortom Begs Nigerians To Come To Aid Of Benue IDPs

FG to seek UNESCO recognition for festivals in Nigeria

2023: Don’t be tool for character assassination – Ekweremadu to journalists