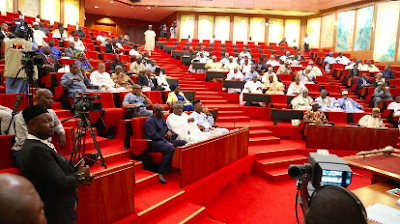 The Senate on Wednesday mandated its Committees on Legislative Compliance and Communications to invite Isa Ali Pantami, the Minister of Communications and Digital Economy, to impress on him the need to implement the resolutions of the Senate regarding security relating to the mandate of his ministry.

The decision was reached in a resolution which followed the consideration of a motion on the spate of growing insecurity in Nigeria.

Rising under Order 42 and 52 of the Senate Rules, Senator Emmanuel Bwacha (PDP – Taraba South), said that, “the rate of insecurity in Nigeria has not only increased astronomically but has reached a melting point.”

According to Bwacha, the challenge has manifested in the armed robbery, kidnapping, assassination, banditry, and other criminal activities in Nigeria.

“The assassination of Nasarawa State APC Chairman and other high profile cases are still fresh in our memories. A Chinese National was recently abducted in my community, his whereabouts are still unknown,” Bwacha lamented.

Bwacha further expressed worry that, “there is a growing suspicion of the complicity of officials of state saddled with the responsibility of protecting lives and property of the citizens, but compromised in the process.”

He added, “This is heightened by the arrest of several security operatives involved in armed robbery and kidnapping activities across the country. It’s only in Nigeria that communication facilities can be used without a biometric process, no valid identification of passport details (in the case of foreigners) in place to check abuse.”

He raised the alarm that, “bandits, terrorists negotiate for ransom using telephones and getting away with it.”

“The Senate is concerned that the confidence between the protected and the protector is increasingly eroded, resulting in the breakdown of law and order as demonstrated in the #EndSARS protest which was subsequently hijacked by miscreants,” he said.

Manchester United provided Old Trafford for coronavirus vaccination training
In Romania, the fans replaced the snowmen ☃ this is Yes, the snowmen- in the club scarves and hats!
Zlatan about Mandzukic: I tried to greet him in different languages, but he is not one of those who talk a lot
Nagelsmann about real's Interest: Not the worst that can be read, definitely. But the media is not always right
Hazard scored and provided an assist in La Liga for the first time since October 2019
Ronald Koeman: Griezmann has been playing well in recent matches. But we also need goals from other players
Zlatan Ibrahimovic: Milan's Victory in the first round is worth nothing. I need to come to my senses
Source https://www.nigerianeye.com/2020/11/insecurity-senate-laments-use-of.html?utm_source=feedburner&utm_medium=feed&utm_campaign=Feed%3A+Nigerianeye+%28NigerianEye%29

Inter Milan miss chance to go top in Serie A

FA Cup: Arteta under fire for selecting Willian, Pepe in 1-0 defeat to Southampton

Borno: New Emir of Biu gets staff of office

Man, 37, pushes lady to her death from 5-storey building — Police

Attack on farmers: We are investigating — Ogun govt

BREAKING: 12 feared dead as trailer rams into shops in Ondo

Olubadan sues for peace, asks farmers and herders to live in harmony

Wife kills husband with shoe heel over infidelity in Delta

Katsina Approves Resumption Of Day Schools Only On January 25

One dead, other in coma as commercial vehicle collides with truck in Osun

"When Will You Order Arrest Of Herdsmen Terrorising South-West?" Nigerians Tackle IGP, Presidency Over Igboho's Arrest

Man throws girlfriend down from five-storey building after quarrel

Ondo: I stand with Akeredolu on quit notice to herders – PDP Senator

“Why I Am Single” – BBNaija’s Ike Onyema