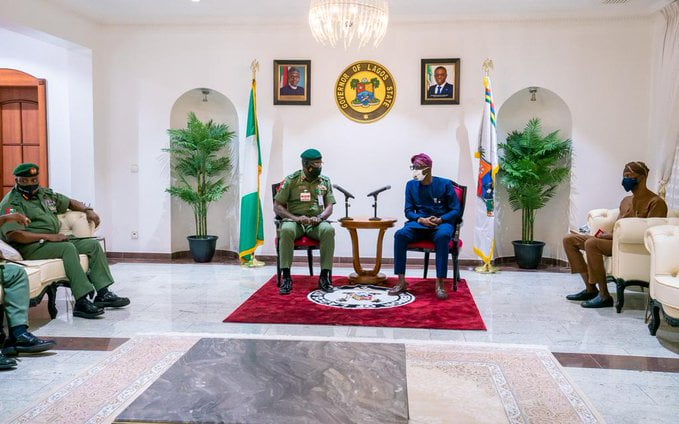 Sanwo-Olu said he promised Umelo that his administration would provide him with all the support he would need to succeed in making Lagos safe for investors, visitors and residents.

DAILY POST recalls that Umelo was deployed to Lagos in July.

“Today, I harped on the importance of synergy amongst security agencies in Lagos as the most effective way to make the state safer when I received Major-General Godwin Umelo, the new GOC, 81Division of @HQNigerianArmy at the Lagos House, Marina,” Sanwo-Olu tweeted.

“We are working with the Nigerian Army, Nigerian Navy, Nigerian Air Force, Nigerian Police and other security agencies to ensure that our state is safe and secure for investors, visitors and residents.

“I promised the new GOC all the support he will need to succeed.” 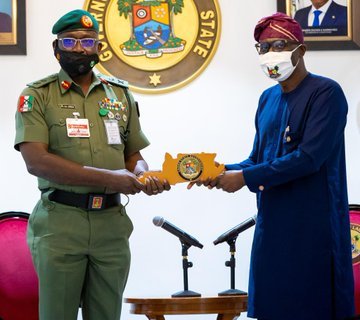 Alvaro Morata: Juventus is a real family. I couldn't say no to this club
Mourinho called the defeat to Bayern Munich in 2012 the worst in his career: Real Madrid was the best team in Europe
Actor Ryan Reynolds can buy the Wrexham club from the 5th English division
Suarez wept as he left the Barca base. He said goodbye to the team's players
Barcelona will try to hire defender Athletic Nunes if Garcia's transfer fails
Havertz scored the first goal for Chelsea
Di Maria suspended for 4 matches for spitting in the direction of Alvaro Gonzalez
Source https://dailypost.ng/2020/08/06/lagos-sanwo-olu-new-goc-81-division-meet/

Nigerian Gov’t To Meet With NLC On Thursday

COVID-19: Anap Foundation calls for caution over crowd at Emir of Zazzau funeral

God used Wike for my re-election me— Obaseki

Silence! Davido’s FEM tops songs and charts for the week

Teni the Entertainer is latest celeb to catch the iCon fever

Why Sleeper Mixtape is a game changer for me ― koloflow

British security alert, vote of no confidence on PMB – PDP

No going back on October 1 rally, says Yoruba Diaspora Group

Bobrisky Lists Out Important Things To Consider Before Starting A Fight

Obasanjo, at three-day prayer, recounts how late Emir of Zazzau helped him to solve Plateau crisis

Buhari congratulates Elumelu on naming among 100 most influential people

BBNaija 2020: Why I couldn’t control my feelings for Nengi – Ozo

Sit-at-home: We are totally in support of it ― Ohanaeze Ndigbo

Circular road, Agbowo complex renovation will be completed before May 2023 ― Makinde

COVID-19: PTF made up of politicians rather than researchers – ASUU laments